Please ensure Javascript is enabled for purposes of website accessibility
Log In Help Join The Motley Fool
Free Article Join Over 1 Million Premium Members And Get More In-Depth Stock Guidance and Research
By Will Healy - Apr 30, 2021 at 7:00AM

With housing soaring and the pandemic forcing more activity online, the current environment has meaningfully boosted Zillow Group's (ZG -0.99%) (Z -0.88%) stock. Both the value it creates and its growing real estate ecosystem have sent revenue soaring. Despite this success, the offerings of its lower-cost competition could bring uncertainty to the real estate stock.

Let's take a closer look at the competitive advantages of Zillow and its peers to evaluate the threat.

Zillow began by pioneering a website that caters to the real estate industry. It leveraged the power of the internet to connect buyers and sellers and now proclaims itself the most-visited real estate site in the U.S. 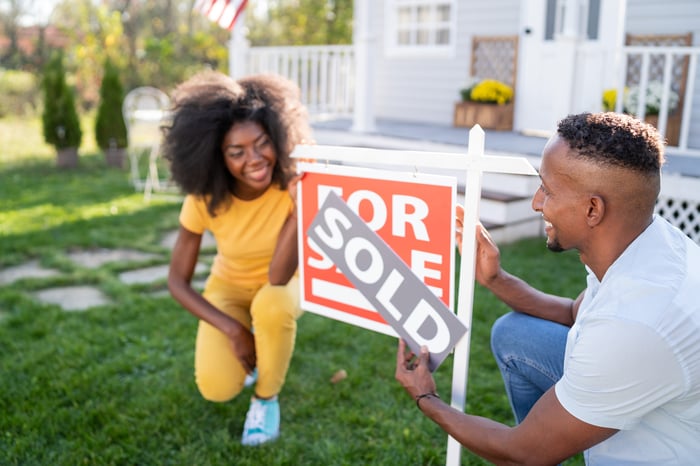 The company has also threatened to disrupt the real estate industry in more profound ways. It has recently ventured into the direct purchase and sale of homes through Zillow Offers. Nonetheless, that makes up just one part of its ecosystem. The company also has ventured into the financial services realm by offering mortgage services and performs closings through Zillow Home Loans and Zillow Closing Services, respectively. These can potentially involve Zillow in the home sales process from beginning to end.

Who are its disruptors?

However, for all of the changes Zillow has made to the real estate industry, it has done little to cut transaction costs. The average home in the U.S. now sells for around $400,000. Since both the buying and selling agent usually receive a 3% commission each, selling fees can amount to $24,000 alone. This does not include other sales-related costs such as staging, concessions, or repairs. Such costs leave both the traditional real estate industry and Zillow vulnerable to lower-cost challengers.

Opendoor (OPEN -2.01%) began a buying and selling service in 2014. This service cut the total commission to 5%, one percentage point lower than a traditional sale. Opendoor has also built an extensive trade-in program, allowing customers to buy a home at the same time they "trade-in," or sell their current home to Opendoor.

This forced Zillow to establish Zillow Offers. Since Zillow's site has built a name recognition advantage, Zillow Offers has become an increasingly important part of the company, making up more than half of its revenue in 2020. However, unlike Zillow, Opendoor will also provide a free offer within 24 hours. Zillow has also not matched Opendoor's rent-back option, and Opendoor's trade-in program remains larger.

Zillow peer Redfin (RDFN -3.13%) also buys homes, and it has added pressure on Zillow's business model in other areas. Like Zillow, it also offers services for mortgages and closings.

However, investors can find reasons to like Redfin better than Zillow. Instead of referring agents, it hires them, and these agents act as a buy or sell representative for their clients. For its full service, it charges a 1% commission for its side of the transaction. Clients who choose the concierge service, which also fixes up homes, pay a 2% commission.

Zillow may struggle to match this deal. If clients can find agents willing to accept 1% or 2%, Zillow's referrals for agents who charge 3% hold less value. Moreover, if Zillow starts hiring its own agents, it undermines that core referral business. Hence, either change would bring deep uncertainty for Zillow investors.

Despite this challenge, Zillow continues on an upward growth trajectory. Revenue increased by 22% to just over $3.3 billion. Since operating costs only rose by 4%, it cut its net loss to $162 million. Zillow lost $305 million in 2019.

In contrast, Opendoor experienced a 46% drop in revenue in 2020 to just under $2.6 billion. It had to drastically cut sales and marketing expenses and interest expenses to reduce its losses from $341 million in 2019 to $287 million in 2020.

Neither Zillow nor its peers offered guidance past the first quarter. However, Zillow forecasts little change in revenue levels year over year, while Redfin expects revenue to rise by at least 30%. Opendoor did not post year-over-year numbers but predicts a return of sequential revenue growth.

Still, Zillow posted the highest stock price growth of the two, rising 270% over the last 12 months, versus 250% for Redfin. Opendoor launched its IPO in December but has not logged any meaningful gains since that time. 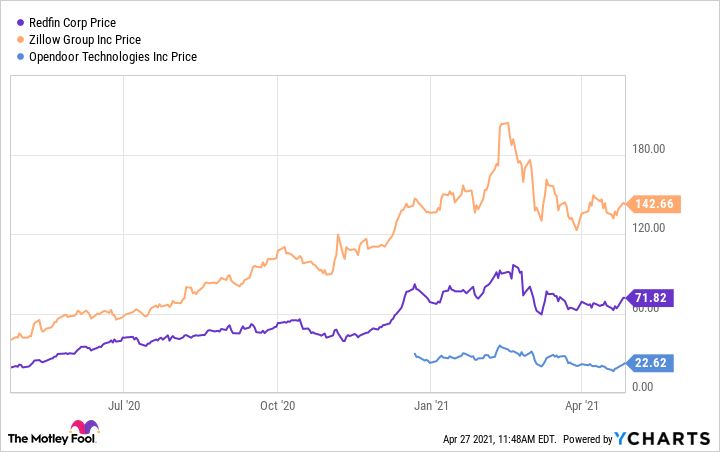 Could these companies supplant Zillow?

Now, the question is whether Zillow stock will continue to increase faster than its peers. Although Opendoor appears positioned for revenue recovery in the near term, it holds only a modest competitive advantage over Zillow in a few limited areas.

The more significant threat comes from Redfin. Its lower-cost solution could force Zillow to make fundamental changes that would bring uncertainty. Additionally, with Redfin posting more consistent revenue increases, its stock could attract interest at the expense of Zillow's. Consequently, Zillow's future prosperity could depend in large part on how it responds to this challenge.