Please ensure Javascript is enabled for purposes of website accessibility
Log In Help Join The Motley Fool
Free Article Join Over 1 Million Premium Members And Get More In-Depth Stock Guidance and Research
By Brett Schafer - May 4, 2021 at 9:15AM

The platforms are coming at the market with different strategies.

Podcast listenership has grown substantially over the past decade. Over 100 million Americans are expected to listen to a podcast in 2021, with weekly listenership estimated to be up 100% since 2016. The leading platform in popularizing the entertainment medium was Apple (AAPL 2.62%), which pre-downloads the Apple Podcasts app onto every device it sells. Spotify Technology (SPOT 3.92%) is newer to the podcast game. It launched podcast features on its service in 2015 and only started heavily investing in podcasts a few years ago.

Even though it is a late entrant to the industry, Spotify has gained podcast market share against Apple each of the last few years and is projected to pass Apple in listenership sometime in 2021 or 2022. Apple, as you might expect, is not taking this sitting down, recently announcing new user and monetization features for Apple Podcasts.

Both Spotify and Apple are trying to gain market share and help creators monetize their podcasts, but in different ways. Which strategy will win over the long term? 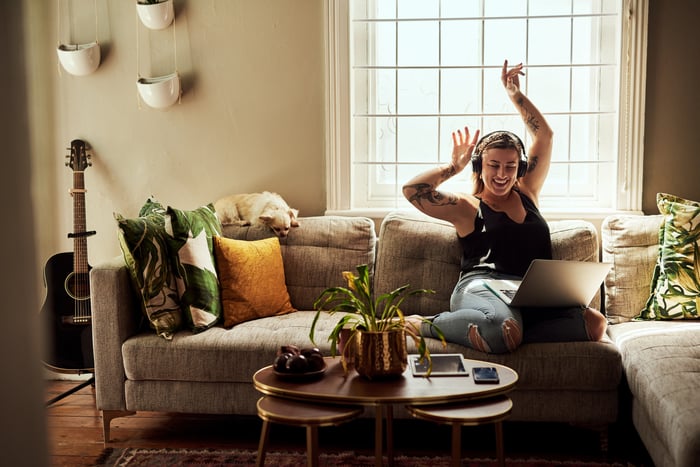 Over the past decade, Apple Podcasts hasn't improved much or added new features. It stayed as the dominant player mainly because no major platform tried to compete with it, and likely sustained its success because the app came pre-downloaded on over a billion devices. Essentially, Apple just let the industry grow on its own by keeping its distance from both listeners and creators but also ignored easy ways it could help improve the industry, like with better curation for users or monetization tools for creators.

This is changing with the next iOS update, announced at the latest Apple product event. Users of Apple Podcasts will now get a better search tab and easier access to charts and categories, plus some smart playback features will help users jump around to different parts of an episode. It is also getting into podcast playlists, where people curate groups of shows they think specific audiences will like.

But the biggest change was Apple's announcement that it is letting podcasts launch premium subscriptions for exclusive, extra, or early window content. Like with all apps that go through iOS, Apple will take 30% of subscription revenue in the first year and 15% each year after that. Besides these few updates, Apple doesn't seem to be doing much else in trying to improve the Apple Podcasts experience, for either creators or users.

Spotify started 15 years ago as a music streamer, but has since pivoted to the entire audio market. Its biggest current push is podcasts. At the end of last year, 25% of Spotify users engaged with podcasts, which, based on its end-of-year user numbers, means 86 million people now use the service to listen to podcast content. It also has signed exclusive deals with the Joe Rogan Experience and other popular shows and hosts. Investors should look at these deals not as a way for Spotify to make money, but as a customer acquisition tool that will help it take more market share from Apple Podcasts.

While Spotify just announced a subscription/paywall feature similar to Apple, its main strategy for podcast monetization is building out a global advertising network. It started this by acquiring three studios (the Ringer, Gimlet, and Parcast), investing in an internal podcast studio, and buying two popular distribution platforms (Anchor and Megaphone). This gives Spotify ownership or distribution control of a meaningful portion of the podcast supply chain. It is now going to use this to its advantage and to the benefit of creators by giving all these podcasts access to its newly launched Spotify Audience Network, which allows advertisers to buy audio ads across Spotify-owned content and music, Anchor, and Megaphone. This will allow hundreds of thousands of podcasts to monetize their work with a plug-and-play advertising solution, similar to how YouTube helps its creators monetize their videos. Of course, Spotify will take a cut of every advertising dollar.

I think it is clear that Spotify has a better podcast strategy for a few reasons. It is giving creators the greatest amount of tools to monetize shows, and with the abundance of podcasts out there, it is likely that most content won't go behind a paywall (again, similar to YouTube). It also has a better strategy for acquiring users by pitching them with exclusive content. Taking all these factors into consideration, plus the fact that Spotify is already on track to pass Apple in podcast market share, it is safe to say the Swedish audio streamer has the better podcast strategy for pleasing users and creators alike.