Please ensure Javascript is enabled for purposes of website accessibility
Log In Help Join The Motley Fool
Free Article Join Over 1 Million Premium Members And Get More In-Depth Stock Guidance and Research
By Jason Hawthorne - May 4, 2021 at 8:55AM

Showered with optimism in April, shareholders will have to wait for the bloom.

Novavax (NVAX 12.49%) had a busy month in April. Shares gained 30% according to S&P Global Market Intelligence. Early in the month, the stock began climbing after Johnson & Johnson's vaccine was temporarily halted. Later, President Joe Biden mentioned the company's vaccine as a likely tool in fighting the pandemic. Finally, cases around the world continue to climb, leading investors to believe there will be plenty of people who still need protection once the Novavax vaccine is available. 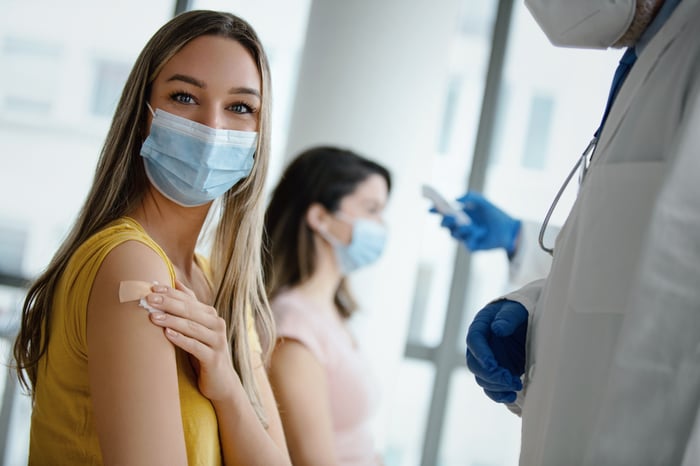 Investors translated the struggles of other vaccine makers into an opportunity for Novavax. That's despite the fact that the company's drug hasn't received authorization in any country. Nor has the company released the results from its Phase 3 trial in the U.S. and Mexico. That study began in December.

There is reason for optimism. Novavax has produced results from a study in the U.K that were on par with the vaccines that have been authorized.

Management had originally pointed to May as a possible date for authorization, which would tie in to Biden's suggestion. However, the first day of May brought news suggesting otherwise.

Unfortunately for shareholders, Novavax gave back most of April's gains on the first trading day of May. The stock fell 18% after the company finalized a deal with the European Union for 200 million doses of its vaccine. That may seem like good news, but Wall Street spotted a problem: The bulk of those shots won't be delivered until 2022.

For now, shareholders will continue to wait for authorization. Material shortages have hampered the company's efforts to reach full-scale production, and full capacity is now expected by the third quarter. That means Novavax's first shipments to Europe may begin toward the end of the year.