Please ensure Javascript is enabled for purposes of website accessibility
Log In Help Join The Motley Fool
Free Article Join Over 1 Million Premium Members And Get More In-Depth Stock Guidance and Research
By Jeremy Bowman - May 5, 2021 at 11:06AM

Shares of Intuitive Surgical (ISRG -1.91%) were climbing last month as the maker of the da Vinci surgical robot posted better-than-expected results in its first-quarter earnings report, easily beating estimates on the top and bottom lines. The stock also got a boost from an analyst upgrade earlier in the month as well as general optimism about the economic reopening and President Joe Biden's infrastructure bill, which includes money for healthcare.

According to data from S&P Global Market Intelligence, the stock finished last month up 17%. As you can see from the chart below, the stock gained through much of April before shooting higher on April 21 when its earnings report came out. 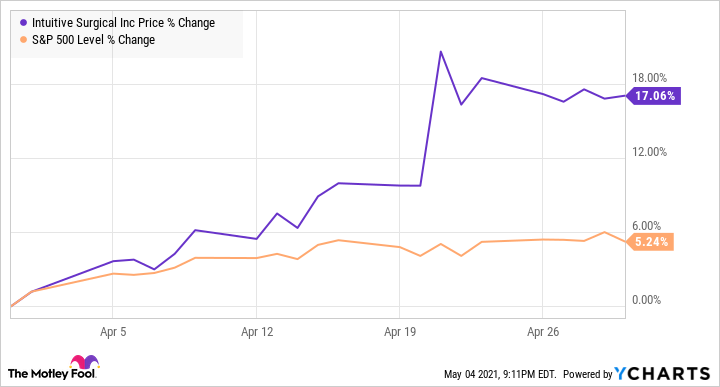 Intuitive Surgical kicked off the month with a positive analyst note from Citigroup, which initiated coverage with a buy rating, saying that the company was expanding its robotic surgery platform into new areas like urology, gynecology, and general surgery, increasing its market opportunity. 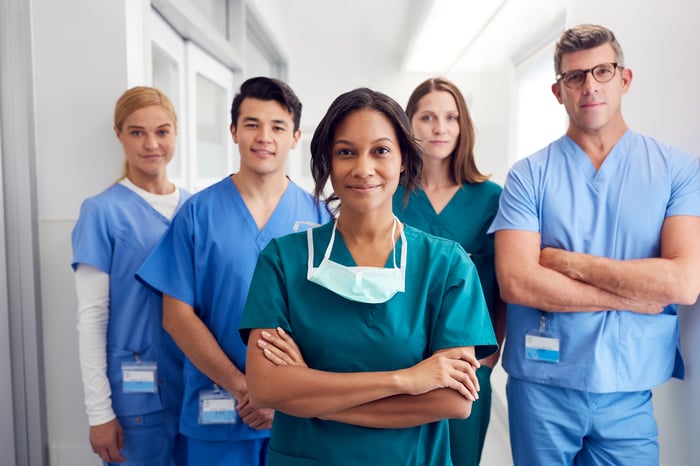 The stock gained alongside the S&P 500 through the first half of the month, then shot up 10% when its earnings report came out.

Da Vinci procedures increased 16% in the period, and its installed base grew by 8%. That drove an 18% increase in revenue to $1.29 billion, which easily beat estimates at $1.11 billion. It was the fastest growth rate from the company, showing patients are becoming more comfortable with surgical procedures now that the COVID-19 threat is easing. Intuitive Surgical also posted strong growth on the bottom line as adjusted earnings per share increased from $2.70 to $3.52, easily outpacing estimates at $2.63.

As the company laps a weak performance last year due to the pandemic, it expects procedures to grow 22% to 26% this year with operating expenses rising 18% to 22%, indicating margins should expand.

Intuitive Surgical has a strong competitive position with unique technology and a razor-and-blades model that keeps customers locked in and delivers high margins. The healthcare stock is pricey but the business consistently delivers high growth. As it expands to new platforms, that steady growth should continue.