Please ensure Javascript is enabled for purposes of website accessibility
Log In Help Join The Motley Fool
Free Article Join Over 1 Million Premium Members And Get More In-Depth Stock Guidance and Research
By Evan Niu, CFA – May 5, 2021 at 2:00PM

Shares of ODP (ODP -0.79%) jumped by as much as 14% in Wednesday morning trading after the company reported first-quarter earnings and announced plans to split itself into two publicly traded companies. As of 1:41 p.m. EST, the stock had given back some of those gains, but was still up by 9.3%.

Revenue in the first quarter was $2.4 billion, right on target with what analysts were expecting. That resulted in adjusted net income of $68 million, or $1.21 per share, which beat the consensus estimate of $0.72 per share in adjusted profits. The parent company of retailers Office Depot and OfficeMax said it has made significant progress in its digital transformation and in its pivot toward a business-to-business (B2B) strategy. In order to unlock shareholder value, ODP announced a tax-free spinoff of its B2B segment into an independent company. 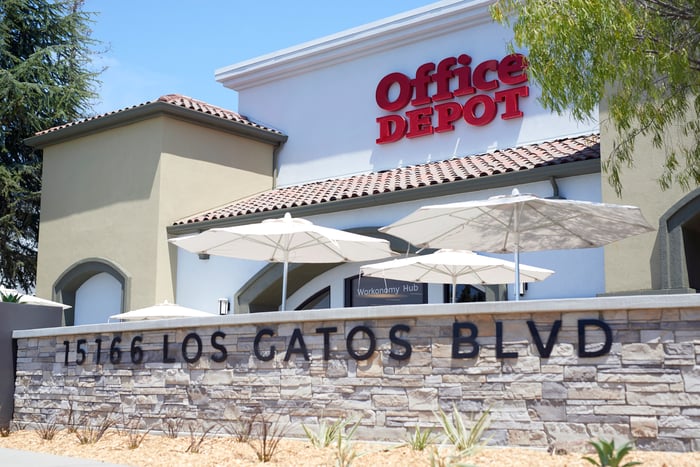 "We believe creating two focused, pure-play companies will unlock significant opportunities by improving our ability to meet the needs of our customers, while better matching assets and investment profiles of both companies to generate greater value for our shareholders," CEO Gerry Smith said. "Maximizing the strategic focus and financial flexibility of each entity and aligning their go-to-market strategies and capital investments will enable us to meet customer demand."

ODP will distribute shares of the new company as a tax-free dividend to shareholders as of a record date that has not yet been determined. ODP shareholders will then own 100% of the equity of both companies. The separation is expected to be completed in the first half of 2022. While the two companies will be independent, they will share commercial agreements that will allow them to benefit from economies of scale for things like product sourcing.