Please ensure Javascript is enabled for purposes of website accessibility
Log In Help Join The Motley Fool
Free Article Join Over 1 Million Premium Members And Get More In-Depth Stock Guidance and Research
By Cory Renauer - May 10, 2021 at 7:46AM

Investors want to know if the beaten-down pet insurance stock can turn itself around.

Shares of pet insurance pioneer, Trupanion (TRUP 7.51%) soared in 2020 along with new pet adoptions. A net loss that was larger than expected, though, has kept the stock depressed since the company reported first-quarter earnings.

Is now a good time to buy the only pure-play stock in the pet insurance space or could there be more losses ahead? To help you decide, here are the main arguments for and against buying Trupanion stock right now. 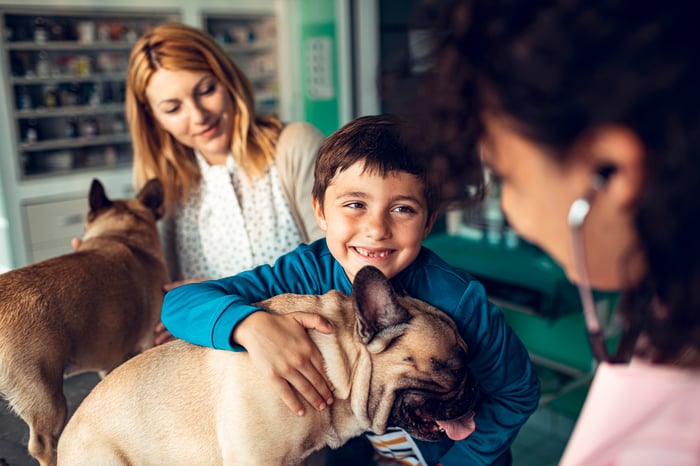 Over the past year and a half, Americans adopted pets at a record pace. In addition to swallowing anything that isn't nailed down, many of these pets will experience lots of medical conditions that humans regularly receive treatment for like diabetes and cancer.

It's increasingly common to treat injuries and chronic medical conditions that traditionally result in compassionate euthanization, but surgery, insulin, and cancer treatments are expensive whether you walk on two legs or four.

Sooner or later, a majority of pet owners will need to make tough decisions that will either harm their family's financial health or end the life of their favorite fur baby. That is unless they have a pet insurance policy. A relatively affordable policy from Trupanion can help owners extend the lives of sick and injured pets without breaking the bank.

The potential growth runway in front of Trupanion is enormous. In 2018, the American Veterinary Medical Association estimated the dog and cat population in the U.S. at around 135 million and all of them have the potential to rack up huge bills at the vet. Despite the obvious risks, only around 1% of American pet owners insure their cats and dogs at the moment. In the U.K. and Sweden, pet insurance penetration rates are up around 25%, and 40%, respectively.

At the end of 2020, revenue averaged out to $60.37 per pet covered. After making payments to veterinarians and covering internal expenses, Trupanion's profit works out to around $7.83 per month per pet. Since the average pet sticks around for 77.5 months, the company can afford to splash out on marketing expenses to attract lots of new customers.

At the moment, Trupanion averages around $272 in marketing expenses to bring in each new client. With just $7.83 per month to work with, there isn't a lot of room to cut prices in the face of competition. At the moment, clients need to stick around for almost three years before the company begins realizing a return on their initial acquisition cost.

Trupanion's monthly retention rate has exceeded 98% for years, but the company's success has attracted competition that will make retention increasingly difficult. Lemonade (LMND 10.15%) is a fast-growing new insurance provider that offers pet insurance plans at less than half the price of Trupanion right now.

Just over a year ago, Zoetis (ZTS 0.68%) launched Pumpkin, its own pet insurance brand. Zoetis hasn't started breaking out Pumpkin's financials yet. As America's largest manufacturer of pharmaceutical products for pets, though, we know Pumpkin has the resources to become a serious contender in the pet insurance space.

Trupanion, Lemonade, and Zoetis can raise capital on major U.S. exchanges, but this hasn't been much of an advantage lately. With plenty of backing from a private equity firm, Petplan is able to offer comprehensive coverage at price points that Trupanion could find hard to beat as well.

Trupanion contends it can continue retaining nearly all of its customers because it offers a differentiated service. In the relatively unregulated market for pet insurance, though, it can be hard for customers to see those differences.

Trupanion's performance over the past few quarters suggests pet owners don't appreciate the differentiated service Trupanion provides as much as investors need them to. 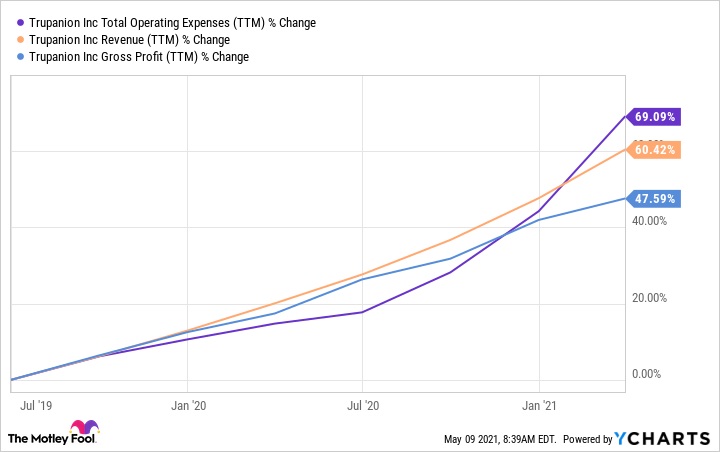 Over the past two years, Trupanion's cost of veterinary care has grown faster than revenue and so have operating expenses. For example, Trupanion spent $48.3 million in cash on a U.K.-based software provider last year to help it compete against Lemonade's slick, and popular online experience. Instead of nearly breaking even as investors have become accustomed to, the company reported a $12.4 million net loss in the first quarter.

The recent loss could be a simple case of growing pains, but it sure looks like Trupanion is beginning to buckle under competitive pressure. Until we can be sure this isn't the case, it's probably best to watch the next chapter of this company's growth story play out from a safe distance.