Please ensure Javascript is enabled for purposes of website accessibility
Log In Help Join The Motley Fool
Free Article Join Over 1 Million Premium Members And Get More In-Depth Stock Guidance and Research
By Jeremy Bowman - May 14, 2021 at 2:17PM

Shares of the food delivery company jumped on a strong earnings report.

Shares of DoorDash (DASH -3.36%) were surging today after the third-party delivery platform posted strong results in its first-quarter earnings report. The performance helped convince investors that the company can carry its momentum into the reopening and that it has a path to profitability. 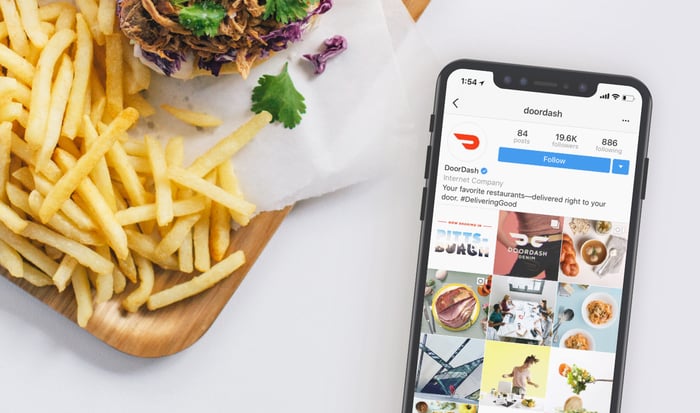 In its second report as a publicly traded company, DoorDash said revenue jumped 198% to $1.08 billion, beating expectations at $993 million. Total orders surged 219% to 329 million, and marketplace gross order volume (GOV), or the total value of orders on its platform, rose 222% to $9.9 billion.

The company also saw strong growth in non-restaurant categories, a key component of the bull thesis, which rose 40% on a quarter-over-quarter basis to make up 7% of total orders.

On the bottom line, the company posted adjusted earnings before interest, taxes, depreciation, and amortization (EBITDA) of $43 million, which compared to a loss of $70 million in the quarter a year ago. On a generally accepted accounting principles (GAAP) basis, it finished the quarter with a per-share loss of $0.34, worse than expectations at $0.26.

DoorDash continues to gain market share. According to data from Edison Trends, DoorDash's share of U.S. food delivery spending reached 55% at the end of April, up from 48% last July, taking share from both Uber Eats and Grubhub.

We believe the transition toward omni-channel local commerce will be a decades long transformation that remains extremely early in its life-cycle. In Q1, we made tremendous progress in building the tools to enable this transition and growing the scale of our platform.

Wall Street largely applauded the earnings report as the stock was upgraded by Wells Fargo and Truist partly in response to its success in expanding its platform beyond restaurants.

In its guidance for the second quarter, the company sees marketplace GOV of $9.4 billion to $9.9 billion, marking a slight decline from the first quarter, and it expects adjusted EBITDA of flat to $100 million. For the full year, it's calling for $35 billion to $38 billion in GOV and adjusted EBITDA of flat to $300 million. Those numbers show DoorDash is still set to grow over the remainder of the year even as it laps its blowout performance in 2020.

Overall, the quarter shows the growth stock is executing on its strategic objectives.