Please ensure Javascript is enabled for purposes of website accessibility
Log In Help Join The Motley Fool
Free Article Join Over 1 Million Premium Members And Get More In-Depth Stock Guidance and Research
By Rhian Hunt - May 17, 2021 at 7:50AM

The company's first-quarter results showed strength as key markets emerged from the pandemic.

Scent and cosmetics maker Inter Parfums (IPAR -3.56%) reported its first-quarter results on May 10. At first glance, it may have appeared the latest report disappointed investors as shares declined immediately following its release, but in fact, broad swathes of the market are reeling as multiple government policies and economic trends converge to drive both inflation and inflationary fears.

Inter Parfums actually looks energized and ready to punch above its weight, and there are several reasons investors interested in consumer-discretionary stocks should take a bullish view of its prospects. Here are three key factors working in the company's favor.

Topping the catastrophic results of early 2020 when COVID-19 was spreading rapidly and lockdowns started to disrupt the economy isn't necessarily a strong argument for a bull case. However, the company's first quarter grew from the same period in 2019 as well, showing a multi-year positive trend. 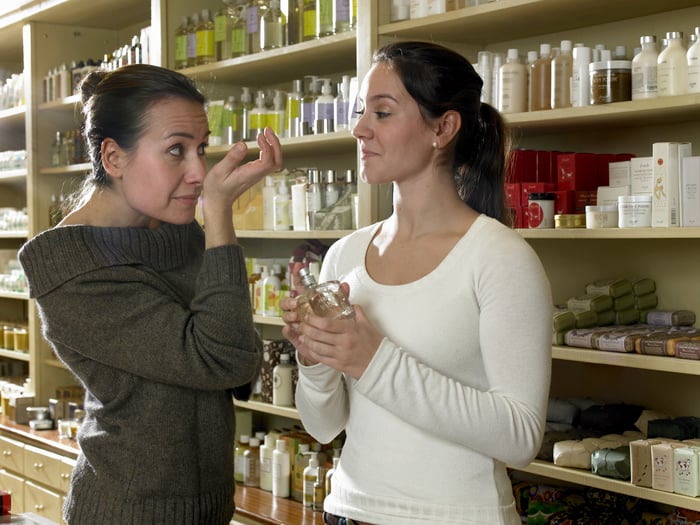 Inter Parfum's reported numbers also handily beat the analyst consensus on the bottom line. This surge from 2019 demonstrates the company's year-over-year growth is consistent rather than a result of a weak showing last year.

Sales showed double-digit gains across North America, Asia, Eastern Europe, the Middle East, and Central and South America. The company is guiding for full-year earnings of $1.65 per share and $700 million in revenue.

Inter Parfums managed to outperform some of its peers in the personal care and beauty sector such as Coty, which struggled to raise its first-quarter EPS to break-even after a $0.14 adjusted loss per share in the year-ago quarter. Its top line fell 3% year over year as well.

Inter Parfums is already busy expanding its perfume lineup with an ongoing series of major releases with four perfumes released through four of its main brands last quarter. Six more brands will see one or more significant product rollouts by the end of the year.

CEO Jean Madar noted, "Entirely new fragrances are planned for the coming quarters as well, including a Lanvin women's line, a new duo for Abercrombie & Fitch, Dunhill's Driven collection for men, and a men's grooming collection for GUESS." The company is leveraging its success to appeal to a broader audience and working to expand its men's product line.

3. It's positioned in a market with a lot of potential

Inter Parfums profits from both the perfume and cosmetics markets, and the growth projected in those two sectors for the coming half-decade ranges from 6% to 7%. Europe rates as the biggest market for perfume, but the Asia-Pacific region is seeing the fastest growing demand for both categories.

Not surprisingly, Inter Parfums saw its Asia-Pacific sales jump 34% year over year last quarter. It's clear the company already has a strong global reach across key markets, which should help it capture the gains expected in these industries.

Despite the recent volatility, Inter Parfums is still on a promising trajectory after shaking off much of the lingering effects of COVID-19. Topped off by a dividend yielding 1.3% as of this writing, investors looking for quality luxury brands should add Inter Parfums to their portfolios.