Please ensure Javascript is enabled for purposes of website accessibility
Log In Help Join The Motley Fool
Free Article Join Over 1 Million Premium Members And Get More In-Depth Stock Guidance and Research
By Howard Smith - May 18, 2021 at 4:28PM

Today's move brings the stock's gains to more than 12% so far this week.

The stock of Canadian cannabis company OrganiGram Holdings (OGI 6.31%) has had a stellar start to the week. Shares are up more than 12% since yesterday, including a gain of 5% today as of 3:15 p.m. EDT.

The company announced a new product launch today, but that likely doesn't explain the recent jump. The two-day gain in shares gets the stock approximately back to where it was prior to the announcement earlier this month that CEO Greg Engel was leaving that role immediately. His interim replacement is Board Chairman Peter Amirault. 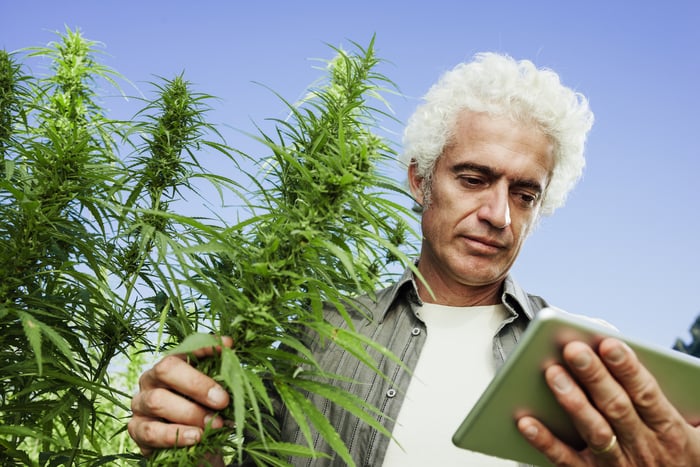 Yesterday, OrganiGram's stock jump may have been related to positive news from its partner British American Tobacco (BTI -0.03%). But the move so far this week may also be stemming from a push by Republican congressmen for federal marijuana legalization. Last week, Congressman Dave Joyce and fellow Republican Don Young introduced the Common Sense Cannabis Reform for Veterans, Small Businesses and Medical Professionals Act.

The congressmen cite actions being taken at the state level and said, "continued cannabis prohibition is neither tenable nor the will of the American electorate." It's notable that Republicans are sponsoring the bill, which gives more momentum to the drive to remove marijuana from the Controlled Substances Act. This would allow states to legally import and export across state lines, and the bill would "create a federal pre-emption to protect financial institutions and other businesses in non-cannabis legal states so that they can service cannabis companies."

That would be key for Canadian cannabis companies to be able to do business in the U.S. Today, OrganiGram announced a new "Big Bag o' Buds" indoor-grown cannabis strain for the Canadian market. But the prospect of the U.S. market becoming available is more likely what is driving the stock gains so far this week.