Please ensure Javascript is enabled for purposes of website accessibility
Log In Help Join The Motley Fool
Free Article Join Over 1 Million Premium Members And Get More In-Depth Stock Guidance and Research
By Parkev Tatevosian - May 20, 2021 at 9:45AM

The delivery platform made a pair of announcements that has the investment world buzzing.

DoorDash (DASH -5.92%) has the investor community buzzing after a couple of major developments in the middle of May.

First, the company reported fantastic first-quarter earnings, which showed it nearly tripled revenue from a year ago. Second, DoorDash announced a partnership with Rite Aid (RAD 1.11%) where the latter will list its products on the former's platform.

The two developments combined to send the stock price soaring by over 20%. It has since given back some of those gains, but investors are still talking about how fantastic these two developments are for DoorDash's long-term prospects.

DoorDash reported revenue of $1.1 billion for its first quarter. The result was much better than what analysts on Wall Street were expecting. The outperformance came as folks who started using DoorDash during the worst days of the pandemic maintained the habit even as states were easing restrictions at restaurants. 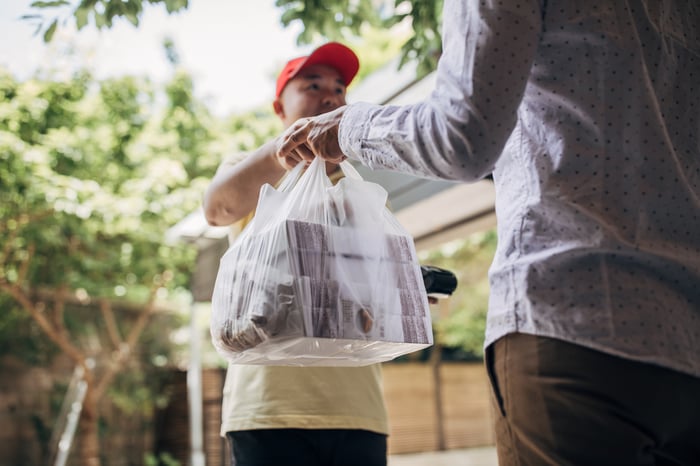 Here's what DoorDash Chief Financial Officer Prabir Adarkar had to say on the matter in the company's conference call following the earnings announcement:

"So as consumers begin to use the product, new habits develop, and those habits tend to persist. And part of that is being bolstered by the fact that the product has gotten routinely better over the course of time."

The comment alleviated some fears from investors that people will quickly revert to pre-pandemic patterns as they get vaccinated and the risk of infection continues to decrease. The development even gave management added optimism for the fiscal year 2021. DoorDash raised its gross order value (GOV) guidance for the year by 15%. Previously, it guided GOV in the range of $30 billion to $33 billion and has since raised that range to $35 billion to $38 billion.

Management is telling investors it will use these newfound gains to invest in growth opportunities. Adarkar said:

"What I will say is we're fortunate in that our core U.S. business is cash generative, and we're taking that cash, and we're investing it to grow some of these new verticals, whether it's convenience or grocery or expand into new merchant services, like Storefront, as well as expand internationally."

On May 11, DoorDash announced a partnership with Rite Aid. According to the press release, DoorDash will offer more than 24,000 items from Rite Aid including health and beauty supplies such as shampoo and makeup, non-perishable and perishable grocery staples such as milk and Thrifty ice cream, over-the-counter medicine like pain relievers, cold and flu care, and household products such as paper towels, cleaning supplies, and more.

Impressively, DoorDash is making rapid gains in non-food categories. In the most recent quarter, orders from non-food categories increased by 40% from the previous quarter. Furthermore, despite launching the convenience category less than a year ago, DoorDash is now the market leader. Why is that so crucially important for shareholders? Because customers who order from new categories on DoorDash increase their frequency of orders from restaurants. In other words, additional category options develop the habit of ordering more often.

More item availability increases the value proposition for the company's Dash Pass subscription. The offering removes the delivery fee for consumers and reduces the service fee on orders for a monthly price of $9.99. The company envisions the long-term potential of this offering to be similar to an Amazon Prime subscription. The service in its current form is nowhere near the value of an Amazon Prime subscription, but to DoorDash's credit, few services can compare to Amazon Prime, and it's a good target to aim for.

It's no surprise then that investors were buzzing after these recent announcements from DoorDash. Tripling revenue year over year is a towering accomplishment, and rapid progress into the vast convenience and grocery markets could mean that DoorDash sustains turbocharged growth for several years.