Please ensure Javascript is enabled for purposes of website accessibility
Log In Help Join The Motley Fool
Free Article Join Over 1 Million Premium Members And Get More In-Depth Stock Guidance and Research
By Anirudh Shankar - May 21, 2021 at 6:43AM

Here's why you should consider buying into these two companies for the long run.

The best stocks are those you can buy now and hold for the long term. Two healthcare companies that fit the bill are AbbVie (ABBV 1.67%) and Amgen (AMGN 0.42%). Neither company is a big participant in the COVID-19 vaccine race. They seem to have stuck to their circles of competence, and have been working to deliver fantastic results for shareholders by growing revenue and increasing dividends.

Here's why both these stocks can deliver fantastic results right now, and well into the future. 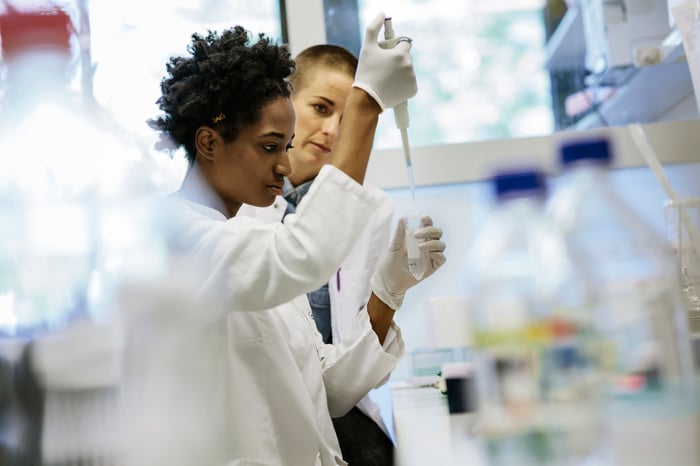 In 2013, AbbVie was spun off from Abbott Laboratories. The new company quickly developed what is currently the best-selling drug on the market, Humira.

AbbVie's product portfolio is not just made up of Humira (for rheumatoid arthritis); it also includes notable products like Imbruvica (lymphoma), Venclexta (leukemia), Zinbryta (multiple sclerosis), and Kaletra (HIV). All these drugs boost AbbVie's sales, and have been big drivers of its tremendous revenue growth over the past few years.

The company has been able to grow revenue at a remarkable pace over the past couple of years. Its five-year average revenue growth, year over year, came in at 13.15%; in just the past year, that number was 47.39%, outperforming its peers by 260%.

AbbVie is also a big dividend payer, yielding nearly 5% for investors at current prices. It has been increasing that payout at substantial rates lately, growing its dividend over the past five years at an average rate of 18.09%.

Believe it or not, AbbVie is a Dividend Aristocrat. Being a part of Abbott Labs and then continuing to pay dividends even after it was spun off kept its streak alive, so the company has now consecutively increased payouts for more than 25 years. AbbVie is as reliable as it comes, and would be a good addition to any investor's long-term portfolio.

Founded back in 1980 under the name Applied Molecular Genetics, the biotechnology giant now called Amgen is still going strong. It showed very promising results in its most recent quarterly earnings report, which came out on April 27.

Some of its flagship drugs -- which include Prolia (bone loss), Evenity (osteoporosis), Repatha (cardiovascular disease), and Amgevita (arthritis) -- all have been doing tremendously, with year-over-year sales up by 16%, 7%, 25%, and 23%, respectively. All these drugs have been key drivers in Amgen's near-term growth.

Its pipeline is also very promising. The company is researching additional indications for its current set of drugs (to expand sales by being able to treat additional illnesses), and conducting clinical trials on drugs such as Lumakras (lung cancer) and bemarituzumab (gastric cancer) in hopes of getting them approved and on the market..

Amgen is also a very steady grower in terms of revenue and dividends. The company has posted a solid 3.13% growth rate over the last five years, and in 2020 posted year-over-year revenue growth of 5%. Its dividend payouts have been increasing at a very handsome pace. Over the past five years, Amgen has increased its dividend at an average rate of 16.09%, rewarding its shareholders with ever-growing payouts.

Unlike AbbVie, Amgen has only been paying dividends since 2011, so it doesn't have a long track record. However, the company boasts a payout ratio of only 44%, which means its dividends are very well covered by earnings. Amgen is still a growing company, and it's likely to be a safe and reliable stock to buy and hold until you retire.