Please ensure Javascript is enabled for purposes of website accessibility
Log In Help Join The Motley Fool
Free Article Join Over 1 Million Premium Members And Get More In-Depth Stock Guidance and Research
By Parkev Tatevosian - May 24, 2021 at 4:27PM

The retailer's first-quarter results are giving management confidence in the long-term strength of the home improvement market.

Home improvement retailer Lowe's (LOW -2.36%) beat analysts' expectations when it reported first-quarter earnings last week. In fact, ever since the onset of the pandemic, the company's revenue has been growing at a much faster rate than its historical average. This has left some investors curious about just how sustainable that growth rate is.

Shareholders will hopefully like what CEO Marvin Ellison had to say on that subject: His comments following the report's release confirm that he's optimistic about the long-term prospects for his company and the home improvement industry as a whole. Here's what he had to say: 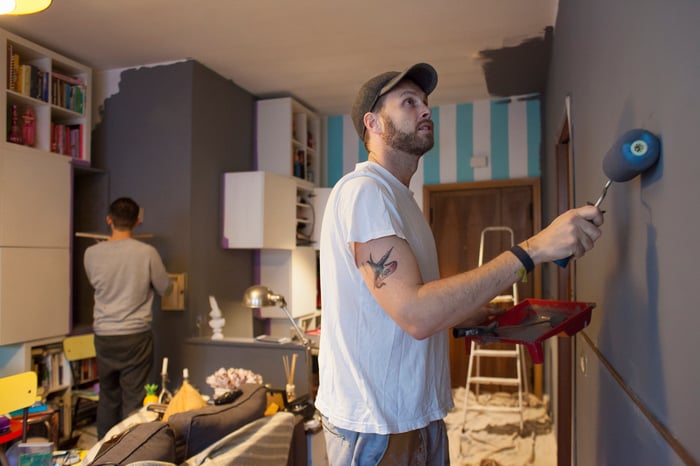 Macroeconomic factors are a tailwind

We are very excited and we're very bullish on the home improvement industry in general. If you look at the macro factors that really impact this business and have historically impacted this business ... things like [1] low mortgage rates, [2] rising home prices, [3] the age of housing stock, [4] improved household formation trends, and also [5] strong consumer balance sheets -- I mean, all of those specific macro factors are pointing in the right direction for us.

That was in response to an analyst's question regarding his outlook for the long-term growth rate of the home-improvement industry. Over the last decade, Lowe's revenue has grown at a compound annual rate of 6.3%. For its largest competitor, Home Depot (HD -1.20%) that rate was 6.9%. Since the onset of the pandemic, however, both competitors have been regularly growing revenues at rates above 20% year over year. Certainly, such accelerated growth can't be sustained for long, but based on Ellison's comments, it's possible that the two could grow revenues by something closer to 10% annually over the next several years.

Throughout the pandemic, many people's homes have taken on the added roles of office, classroom, gym, and more. Folks made upgrades to their homes to support those activities. As such, after the events of 2020, consumers have come to place an elevated importance on their homes, and based on research done by Lowe's, that shift in viewpoint is likely to be sustained for many years.

Beyond the outlook for overall home improvement market growth over the next several years, Lowe's is making moves to gain market share. In fact, it has forecast that in 2021, it will gain market share regardless of what scenario plays out in the broader market. And its first-quarter results gave management confidence that the investments it made to accelerate market share growth are working. 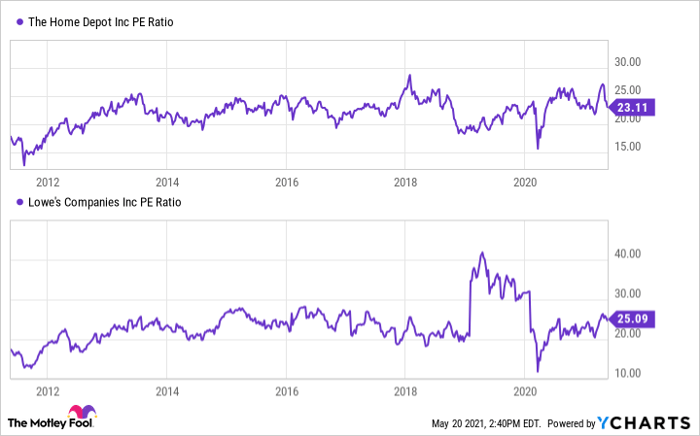 Lowes is trading at a price-to-earnings ratio of 25.1, which is right around its historical average over the last decade. Moreover, it's trading at a premium to Home Depot's P/E ratio of 23.11. That premium could be a result of the market anticipating that Lowe's will be sapping some business away from its chief rival. The two generally trade in tandem with each other.

Given its relatively fair valuation and its solid prospects for growth over the next several years, investors should keep an eye on Lowe's as a potential stock to buy.