Please ensure Javascript is enabled for purposes of website accessibility
Log In Help Join The Motley Fool
Free Article Join Over 1 Million Premium Members And Get More In-Depth Stock Guidance and Research
By Jason Hawthorne - May 26, 2021 at 2:00PM

Flawless execution of management's plan could lead to big gains for the stock in the years ahead.

According to the CDC, up to 600,000 Americans are diagnosed with deep vein thrombosis (DVT) or pulmonary embolisms (PE) each year. These blood clots kill between 60,000 and 100,000 people annually, often within months of a diagnosis. Inari Medical (NARI 3.21%), which came public last May, developed interventional products to treat these clots. Rather than risky, expensive, often ineffective drugs, the company's ClotTriever and FlowTriever devices are catching on with physicians.

Sales, and the stock, climbed rapidly last year. CEO William Hoffman believes the growth is just beginning. Through its short history as a public company, he has consistently pointed to five areas that will be critical to maintaining the trajectory. Investors can look to these each quarter and evaluate whether Inari's performance is on track. Let's look at how it's going so far. 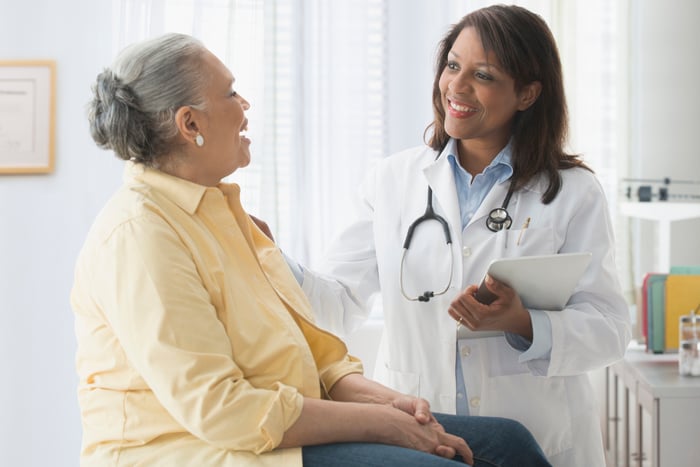 1. Building out the sales organization

Hoffman has said each quarter that Inari might one day have the largest interventionally focused sales force in the market. The statement is based on the combination of opportunity and unmet need. Currently, management estimates the addressable market at $3.8 billion annually, with less than 5% of patients who could benefit currently being treated.

Inari is making progress. Its sales force has expanded the number of territories in every quarter. After initially projecting 10 territories per quarter, the company is now planning more aggressive expansion. Hoffman is projecting 180 to 200 territories by the end of this year.

The second growth driver is increasing adoption among existing hospital customers. To do this, Inari has established the Clot Warrior Academy. It's a Zoom Video Communications-based online platform that includes training using live cases, leadership talks, and a weekly educational series. By the end of 2020, it had engaged more than 2,800 customers across 150 livestream events and housed more than 100 online courses.

Management has also expanded its medical affairs capability, establishing an executive position and hiring a world class interventional radiologist. The role can help customers develop a more consistent process for identifying patients who might benefit from Inari's devices. These processes are standard for heart attack and stroke patients but virtually nonexistent for blood clots.

Another driver of growth is to continue publishing studies showing the effectiveness of the company's devices. Inari's two most recent studies, FLASH for PEs and CLOUT for DVTs, are doing just that.

FLASH is a 500 patient study of blood flow within organs for PE removal. FlowTriever demonstrated best-in-class safety and yielded immediate normalization of vital signs. The study has been expanded to 1,000 patients and more sites across the U.S. and Europe. The trial also added a smartwatch-assisted monitoring component to track heart rate, oxygen levels, and physical activity.

The CLOUT study was similarly designed, but targeted at DVTs. These lower extremity clots are severe, but not as life-threatening as PEs, which are in the lung. In the study, Inari's ClotTriever system achieved 90% median clot removal in an average procedure time of 34 minutes. Compared to the alternative, thrombolytic drugs that force patients to stay in the intensive care unit for observation, it's a clear benefit for the patient, doctor, and hospital.

Inari has also been innovative in developing products for new applications. Its T20 Curve is included with the FlowTriever system, and is designed to improve navigation and torque to remove clots in challenging locations. It is also used for clots in transit. Management estimates the device increased the addressable market by $200 million.

Another new development is the company's FlowStasis, designed to improve suture techniques to close venous access sites. It stops bleeding faster, improving clinician workflow, keeping patients safer, and allowing procedure rooms to be turned around faster. Management is exploring applications of the device beyond its core DVT and PE patient population.

5. Expanding into adjacent and international markets

Late last year, the company completed its first ClotTriever cases in Germany and obtained the CE mark -- designating compliance with European health, safety, and environmental standards -- for FlowTriever. In the most recent earnings call, management shared the addition of three countries in Europe where it had completed cases. COVID-19 lockdowns have limited the travel and hospital access required for a more aggressive sales push, but the company remains positive on the region long-term.

Although management has alluded to adjacent markets to address unmet needs, no specifics have been shared. Investors should keep their eyes and ears open for reference to expansion targets in future presentations.

It all adds up to hypergrowth

Inari posted revenue of $140 million in 2020, 173% more than 2019. It kept up the pace with 113% year-over-year growth for the first quarter of 2021. On top of that incredible growth, the company is already profitable. It puts Inari in a great financial position to keep investing in growth.

Management has laid out five levers that will drive that growth and appears to be on track. For investors, there isn't much to quibble with. The stock may be expensive, trading at a price-to-sales ratio of 25, but it is 31% off of its recent high. That pullback could be an opportunity to buy a company that appears to have everything lined up for massive growth over the next decade.