Please ensure Javascript is enabled for purposes of website accessibility
Log In Help Join The Motley Fool
Free Article Join Over 1 Million Premium Members And Get More In-Depth Stock Guidance and Research
By Nicholas Rossolillo - Jun 4, 2021 at 10:45AM

This cross-border e-commerce technologist is worth putting on your radar.

Shares of e-commerce technologist Global-e Online (GLBE 0.89%) are off to a hot start since making their public debut in mid-May. As of this writing, the stock is up nearly 40% from where it started publicly trading after its IPO. The company specializes in cross-border commerce, and is best known as a software partner to digital selling powerhouse Shopify (SHOP 0.84%) -- which, not incidentally, is also an investor in Global-e.

As is often the case with hot IPO stocks, though, Global-e has a premium price tag. I for one am not buying yet, but this company is worth putting on your radar at the very least. 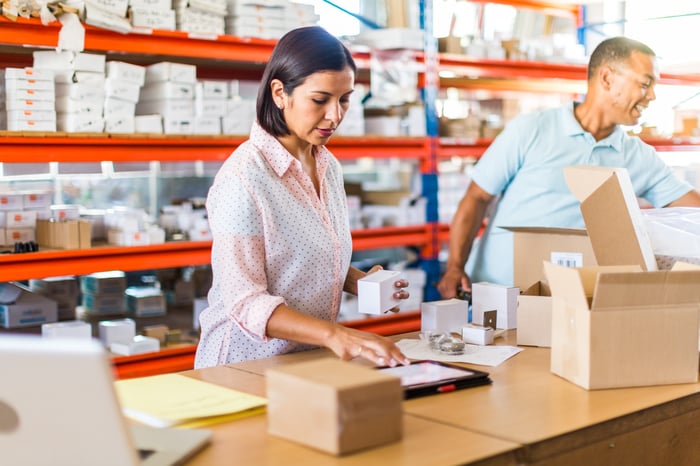 Global-e is a software company that enables an end-to-end shopping experience for merchants trying to reach consumers across borders. It provides website messaging services in over 25 languages, product pricing in over 100 currencies, over 150 different digital payment methods and localized tax calculations, and local shipping and return options. Besides integrating with Shopify's e-commerce platform, it's also partnered with Facebook, which utilizes Global-e for merchants that want to expand into other countries.

E-commerce is booming around the globe, and interest in obtaining goods from their source is on the rise. That's equated to big increases for Global-e, but it could be just getting started. According to a report the company cites from researcher Forrester, the global market for cross-border e-commerce sales could reach $736 billion a year by 2023. Gross merchandise value (GMV) sold through Global-e's platform went from $211 million in 2018 to $774 million in 2020. In spite of skyrocketing use, that tiny GMV implies the company is just a small fraction of the total cross-border selling opportunity out there.

Resulting revenue from GMV (which increases as the company adds new merchants and those merchants sell more products through Global-e) went from $38.6 million in 2018 to $136 million last year. Global-e is also profitable, with net income of $725,000 in 2020 (or $12.6 million on an adjusted EBITDA basis). Net dollar retention rate was an incredible 172% in 2020, implying existing merchants had an average 72% increase in selling through Global-e compared to 2019.

Global-e has been getting a big lift from online shopping during the pandemic, and is beginning to reach a profitable scale. Preliminary results for the first quarter of 2021 imply a 134% year-over-year increase in revenue to $46 million at the midpoint of guidance, and adjusted EBITDA of about $5 million. With that kind of growth, it's no wonder the company raised $431 million in cash from its IPO. Global-e should end up with at least $400 million in cash and equivalents and no debt on its balance sheet when it issues its first quarterly report as a public concern.

As of this writing, Global-e has a market cap of $4.3 billion. Assuming full-year revenue holds steady at the $46 million Q1 run rate (it won't, this is just for illustrative purposes), Global-e stock trades for a hefty 23 times sales. Paired with the minimal profitability it's generating thus far, shares are a little too rich for my taste right at this moment. Plus, I like to wait and see a quarter or two of public reports before I jump in and buy a fresh IPO stock. The first six months of public trading can be incredibly volatile, and I find it pays to be patient rather than chasing a surging share price.

Nevertheless, this e-commerce software provider is growing fast, is flush with cash to market and onboard new merchants, and has some deep-pocketed partnerships in Shopify and Facebook. It's attracting lots of new online businesses to its platform, with millions more it could onboard in the years ahead -- especially in the fast-developing Asia Pacific region, where e-commerce is still just a small single-digit percentage of total retail shopping in many countries. Global-e is worth putting on your watchlist, and could be worth buying later on if its torrid pace of expansion continues. Stay tuned.

Here's the Next Stock I'm Going to Buy

2 Growth Stocks to Buy Before the Market Rebounds