Please ensure Javascript is enabled for purposes of website accessibility
Log In Help Join The Motley Fool
Free Article Join Over 1 Million Premium Members And Get More In-Depth Stock Guidance and Research
By Rich Duprey - Updated Jun 7, 2021 at 11:27AM

Global supply chain disruptions because of the pandemic continue to wreak havoc on industries.

Transocean (RIG -4.45%) announced today that delivery of two next-generation drillships is being delayed again as disruptions in the global supply chain due to the pandemic are causing its contract with Chevron (CVX -0.65%) for one of the drillships to also be pushed back once more.

Although market conditions and interest in ultra-deepwater projects continue to improve as the global economy emerges from the pandemic, the recovery is not happening in a straight line, and rogue waves continue to wash over the driller. 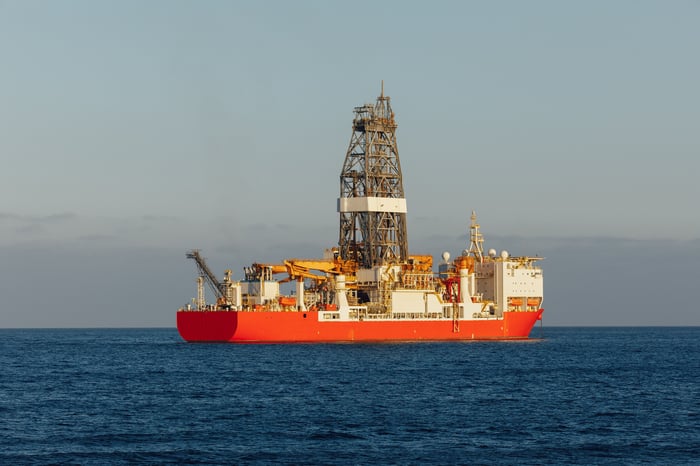 The Deepwater Atlas and Deepwater Titan, the world's first eighth-generation ultra-deepwater drillships, and the only drillships to have 3-million-pound hook loads, were originally ordered from Sembcorp Marine's (SMBM.F -2.21%) Jurong Shipyard in Singapore in 2014.

The ships originally cost $540 million each with delivery scheduled for late 2017 and early 2018, respectively. But delays and design upgrades -- such as the increased hook load capacity -- have seen their price explode. Transocean's annual report in March said both ships would cost it almost $2.27 billion.

Transocean entered into an agreement with Chevron for the Deepwater Titan for operations in the Gulf of Mexico in December 2018, but the drillship's delivery was again delayed when Chevron wanted the blowout preventer upgraded.

Last month, Transocean CEO Jeremy Thigpen told analysts the supply chain disruptions were not only impacting delivery, but also the company's capital expenditures program, as well as causing a delay in the commencement of each rig's first drilling campaign.

But Transocean announced today that Jurong has agreed to accept deferred payment for both rigs, with the Atlas being delivered this December and the Titan coming next May. It also said the Titan's operations for Chevron will begin in the first quarter of 2023 with the terms of the five-year, $830-million contract remaining intact.