Shares of Invitae (NVTA -8.05%) fell 17.5% in May, according to data provided by S&P Global Market Intelligence. Investors were not impressed with the company's first-quarter earnings early in the month, especially management's inability to control costs.

The reaction may have surprised some who saw an accelerating top line as a sign of momentum in the business. Revenue came in at $103.6 million, up 61% from last year. That was higher than the 58% reported in the first quarter of 2020. Billable volume also accelerated, climbing 72% compared with 64% in the year-ago period. Unfortunately, that growth isn't proving that the company will scale to profitability, and it is coming at a steep price. 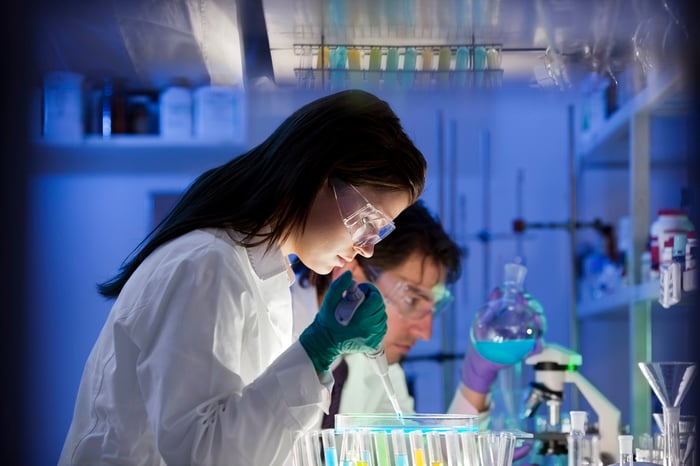 The gross margin -- the percentage of revenue left over after the costs of sales -- was 27% compared with 37% last year. Even adjusting for acquisitions and stock-based compensation, this year's margin was lower than in 2020. That means despite performing more tests, the cost per test didn't go down. It's a red flag for Wall Street. Exacerbating the issue was the increase in shares outstanding.

At the end of March, Invitae had 194 million shares outstanding. That's almost twice the 99.6 million at the end of last year. Doing the math, each share represented $0.65 of sales and $0.27 of adjusted gross profit last year. Fast-forward to this year, and those numbers stood at $0.53 and $21, respectively. The ballooning share count also doesn't include the $1.15 billion in convertible debt the company raised in April. That isn't a concern for now. Even if they are converted, it would happen sometime in mid-2025 or later, and only if the stock remains at a price nearly 120% higher than it trades today.

Some say every dark cloud has a silver lining. Invitae shareholders might have to squint to see it. The massive share dilution and debt offerings have given the company a much-needed cash cushion. It ended March with $682 million on its balance sheet compared with just $301 million at the time last year. That's good because the company burned $299 million in 2020.

Management blamed the increasing costs on the timing of billing customers, as well as inefficient processing of newer tests. Timing should sort itself out through the remainder of the year. As for efficiency, that remains to be seen. Proving it can get costs in line will be the key to becoming self-funding. If it can, it should put Wall Street's mind at ease and get the shares moving up again.