Please ensure Javascript is enabled for purposes of website accessibility
Log In Help Join The Motley Fool
Free Article Join Over 1 Million Premium Members And Get More In-Depth Stock Guidance and Research
By Parkev Tatevosian - Updated Jun 11, 2021 at 9:56AM

The international retail giant hit $386 billion in sales in 2020 and would need to expand revenue by 30% to hit $500 billion this year.

Ever since Amazon (AMZN 0.57%) came on the scene, it has been on a rapid growth trajectory, expanding from a tiny bookseller when it started to the global retail giant it is today.

Its hyper-efficient business model was capturing sales from brick-and-mortar retailers for nearly two decades. Then came the coronavirus pandemic. Fearing public places that could potentially expose them to COVID-19, consumers turned en masse to Amazon for their shopping needs. The result was a record year in 2020, as Amazon's sales eclipsed $386 billion.

That's causing analysts, including myself, to ask the question -- could Amazon's sales reach half a trillion dollars in 2021? 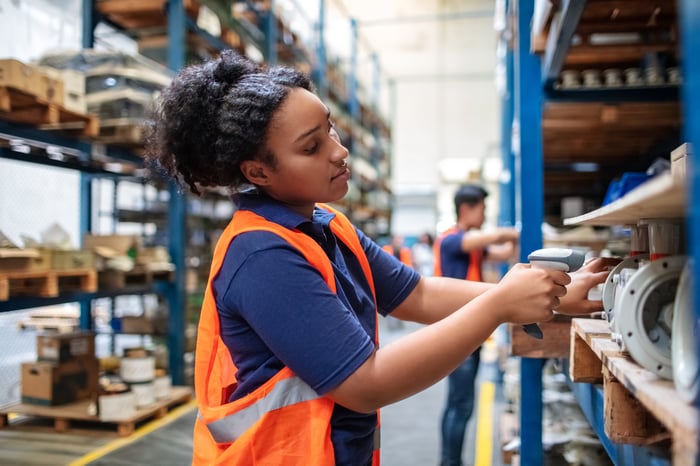 In the first quarter, Amazon reported total sales of $108.5 billion. At that pace, annual sales would come in at $434 billion. That would be a large figure, but it would fall short of the $500 billion in annual sales.

However, Amazon provided second-quarter guidance to investors, and in that guidance, it said to expect revenue in the range of $110 billion to $116 billion in the second quarter. That is, of course, assuming Amazon Prime day happens in the second quarter as planned. The shopping extravaganza that offers deals to the 200 million Prime members is known to boost spending.

If Amazon does hit the midpoint of that sales guidance of $113 billion, that would be an annualized pace of $452 billion -- an acceleration, to be sure, but still short of the $500 billion figure. Further, if it indeed reports sales at the midpoint, that would mean in the first two quarters of 2021, Amazon would have sales of $221.5 billion -- leaving the remainder of roughly $280 billion in sales over the next two quarters to reach $500 billion for the year.

Undoubtedly, the pandemic caused sales to surge at Amazon, and there is a risk that as world economies recover from the pandemic, that surge could be reversed. In the U.S., the vaccination campaign is going well, and states continue to ease business restrictions as more people get vaccinated. Unfortunately, other parts of the world will take longer to recover from COVID-19.

The longer recovery could allow Amazon to maintain surging revenue in its international segment, which accounted for $30 billion in net sales in the most recent quarter.

Moreover, many of the shoppers that came to Amazon during the pandemic are likely to stick around even as economies reopen. The underlying fact remains that shopping on Amazon is usually more convenient than shopping in your local brick-and-mortar store for things you don't need urgently. That is largely what has led e-commerce sales to consist of a growing part of overall sales.

Increasing sales are allowing Amazon to leverage its fixed costs and expand profit margins. Indeed, its operating profit margin had expanded from 1.8% in 2011 to 5.9% in 2020. During that same time, sales have increased from $48 billion to $386 billion. And most importantly, Amazon has compounded earnings at an annual growth rate of 32.4% in the last decade.

Fortunately for investors, Amazon is trading at a trailing 12-month price-to-earnings ratio around 64, which is its cheapest valuation in more than a decade. It could be a good time to consider adding shares of the e-commerce giant to your portfolio.