Please ensure Javascript is enabled for purposes of website accessibility
Log In Help Join The Motley Fool
Free Article Join Over 1 Million Premium Members And Get More In-Depth Stock Guidance and Research
By Eric Volkman - Jun 15, 2021 at 10:58AM

A version rolling out next year will apparently contain a blood sugar monitor.

That cool smart device on your wrist will soon become even more attractive and useful, at least if you intend to acquire one of the latest model Apple (AAPL -0.23%) Watches when they arrive. According to a report published Monday by Bloomberg, citing "people with knowledge of the plans," Apple is planning a host of updates and upgrades to its signature wearable tech product.

Later this year, those sources say, Apple will upgrade the device with a faster processor and an updated screen. The new model should also feature better connectivity, as it will utilize the same ultrawideband functionality that is a core feature of Apple's recently introduced AirTags. 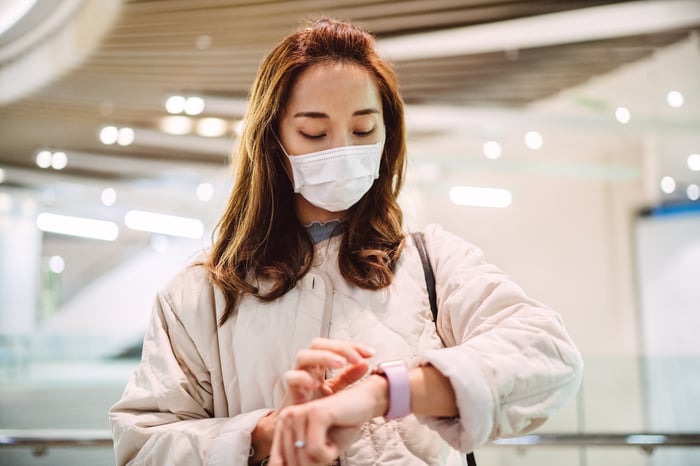 Based on the company's naming convention, this next iteration of the device will likely be dubbed the Apple Watch Series 7.

In 2022, the tech giant will again update the Apple Watch, in addition to the comparatively budget Apple Watch SE. More intriguingly, the company plans a new wearable aimed at extreme sports athletes.

Apparently, Apple would also like to integrate new services and features into future Apple Watches, among them blood sugar sensors and body temperature gauges.

Apple, typically a rather tight-lipped company, has not yet commented on the Bloomberg article.

While smartwatches and fitness trackers are dime-a-dozen technology these days, Apple aims to stand out from the crowd by packing added features into the Apple Watch. Bloomberg pointed out that blood sugar monitoring would make the device unique in its increasingly crowded field.

Apple's stock did well on Monday, climbing 2.5% against an essentially flat performance from the S&P 500 index.