Despite volatility in its stock, the data aggregation specialist looks poised for ongoing success.

The past several months have been a roller coaster for investors in data science software company Palantir Technologies (PLTR -3.18%). Palantir excited investors when it went public in September, but market sentiment toward the stock has cooled since then. Still, once you peel back the layers of Palantir's business, you'll find three reasons why this innovative and exciting company seems bound for brighter days ahead.

According to IBM, 90% of the entire world's data has been generated just in the past two years. As the various parts of the world currently without the internet continue to go digital, they'll create even more data with every email, text, website, or app.

However, these massive volumes of data are fragmented, coming from many and various sources. Imagine being given a puzzle with a trillion pieces and being asked to put it together. Companies may capture and store all this data, but they're just now realizing that they also need tools to manage it all.

Palantir offers those companies cutting-edge help. Its software formats an organization's data into a single, easily understood language that people can use to make decisions and instantly track their impact. 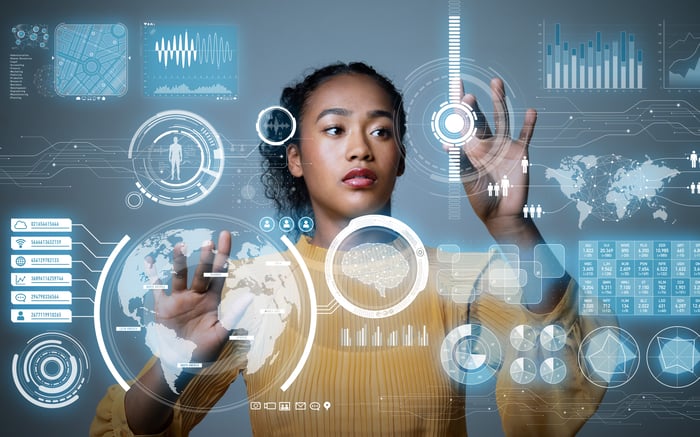 2. The US government has proven Palantir's value

The US government was the first organization to back Palantir in the early 2000s. While details about Palantir's government work are sparse, Palantir has helped the Department of Defense combat terrorism, and it was recently deployed to track the distribution of COVID-19 vaccinations in the US.

Investors should know the controversy that Palantir brings to the table. The company has placed itself into "sticky" public relations situations; its own employees have criticized the company for its work with U.S. Immigration and Customs Enforcement (ICE). Striking a balance between the desires of your employees and your largest customer can be a delicate balancing act.

A handful of government contract wins have illustrated this growth in recent months:

The government is a tight-knit community where relationships and word of mouth make a difference. Palantir's years of proximity to the government have helped it win multiple contracts, strengthening its potential for future gains. Palantir derives 56% of its revenue from government clients -- its single largest customer. Losing that business could expose the company to devastating consequences.

However, as Palantir penetrates various branches of government, its business becomes more "sticky" and difficult to displace. While some companies have similar capabilities in managing data, such as Snowflake, C3.ai, and Alteryx, none currently can do it in a manner that is as integrated and seamless as Palantir. Palantir's Gotham platform can connect various government departments, enabling data from one to aid another. The company's 2020 annual report stated that Palantir wants to be the "default operating system" for all mission-critical data across the US government.

The ability of Palantir's technology to simplify and provide insights into massive data pools is trickling into the private sector:

As companies save time and money through data management, competitors will seek similar tools to catch up (or maintain) a competitive edge.

Right now, Palantir's customer base is concentrated-just 149 customers, the top 20 of whom contributed roughly half of Palantir's total $1.2 billion of revenue in 2020. The private sector currently represents just 44% of Palantir's business. As industries continue to lean on technology (especially with 5G dramatically increasing connectivity), more companies will need to manage their data.

Palantir works with just a tiny fraction of the Fortune 500 (just 24 companies in the Global 300). But if Palantir can provide the same level of value in its software to businesses that it has to the government, we are looking at a massive runway for expansion over the years ahead.

Why Palantir has long-term upside

Palantir's share price has gone up and down lately for no specific reason. Volatility is typical for newly public stocks, and it often doesn't reflect on the business itself. Management is guiding revenue growth at a 30%+ average growth rate over the next four years -- and with a virtually untapped private sector and government revenue accelerating, that target looks achievable.

Earnings-based metrics such as the P/E ratio (price to earnings) won't tell you the whole story for tech growth stocks like Palantir, because right now, it's spending heavily to drive revenue growth. Instead, try weighing the company's enterprise value -- its market cap, plus all its cash, minus its debt -- against its annual sales. The company has pulled back from over 40x EV/sales in February to 29x EV/sales today.

However, as Palantir grows, its revenues begin to expand faster than its expenses -- fattening its profits. In Q1 2021, 49% year-over-year revenue growth helped to push adjusted operating income from last year's $16 million loss to a $117 million gain. In the year-ago period, Palantir burned $290 million in cash; thanks to growing sales, it posted $151 million in free cash flow in Q1. Palantir's expected to be profitable this year for the first time.

Far from a company in decline, Palantir is just getting started. Keep an eye on the company to make sure it continues to deliver new contracts and revenue growth in the quarters to come.