Please ensure Javascript is enabled for purposes of website accessibility
Log In Help Join The Motley Fool
Free Article Join Over 1 Million Premium Members And Get More In-Depth Stock Guidance and Research
By Jason Hawthorne - Updated Jun 18, 2021 at 10:19AM

A cheaper approach could leave more money in the pockets of patients and shareholders.

More than a million hip and knee replacement surgeries are performed in the U.S. each year. By 2030, that number could reach 3.5 million. The cost of those procedures can range from $30,000 to $50,000 each. The expense has led insurers to embrace cheaper alternatives that avoid the costs associated with having the surgery done in a hospital.

Insurers including UnitedHealth Group (UNH 0.04%), Anthem (ELV 0.19%), and Cigna (CI -0.24%), as well as the Centers for Medicare and Medicaid Services (CMS), have been leaning on health systems to move these procedures to ambulatory surgery centers (ASC) for years. As with many things in healthcare, CMS set the tone and insurers followed. In 2019, it added knee replacements to the procedures it covered when performed in an ASC. This past December, it added hip replacements. Those changes came after removing each from a list designating both procedures as inpatient only. 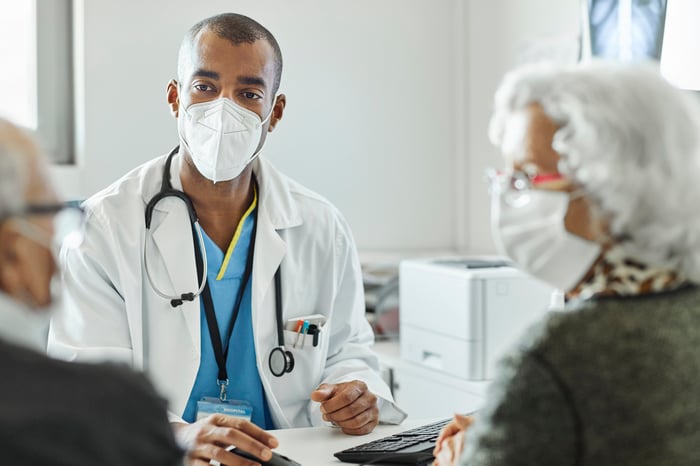 The moves give private insurers the green light to continue aggressively pushing back on hospital-based procedures. That could provide an underappreciated tailwind to some companies' profit margins in the years ahead.

Through UnitedHealthcare and Optum, this company managed more than $250 billion in healthcare spending last year for its customers. In late 2019, the company added an extra authorization requirement even for outpatient surgeries, further restricting which sites of care would justify reimbursement for certain procedures. Specifically, it added knee replacements to the list so more would be performed at lower-cost ASCs. It was part of a larger initiative designed to improve affordability.

At the time, management said it would save beneficiaries $500 million in 2020. Initiatives like that have curbed the rise in UnitedHealthcare's medical cost ratio -- the percent of premiums spent on providing care.

The industry at large still has plenty of room for improvement. The company analyzed more than 1.2 million hip and knee replacements performed in 2019 and found that 90% of patients with private insurance had their procedure done in the hospital. The analysis estimated that moving half of the procedures to the outpatient setting could save employers and insurers $2 billion, and CMS another $1 billion. That's profit waiting to be claimed as the industry clamps down on what it deems unnecessary expenditures.

Anthem offers health insurance as a licensed affiliate of Blue Cross Blue Shield (BCBS), the nonprofit federation of 35 different health insurers. It provides coverage to nearly 14 million Americans. The company implemented its own pre-authorization policy in August of last year to dictate a cheaper site of care. The policy went into effect in 15 states and requires justification if joint replacements were not being done in an ASC. Despite the move, its benefits expense ratio -- what it calls medical expenses as a percent of premiums -- has remained high.

As recently as 2017, a BCBS study found that procedures performed in an ASC offered between 30% and 40% savings compared to a hospital. Despite the difference in cost, the cheaper sites of care accounted for only about 10% of the procedures performed. In the most recent earnings call, CEO Gail Boudreaux pointed out how the pandemic allowed the company to push more affordable options. With patients nervous about being in a hospital, there was more acceptance of ASCs as a legitimate site for surgeries, even joint replacements.

When Cigna acquired Express Scripts in 2018, the deal was focused on coordinating the management of medical and drug costs to reduce the overall healthcare spend for customers. In Cigna's case, those customers are primarily employers and government agencies. One of its strategies was to leverage less expensive sites of care. Its consistently low medical expense ratio shows it's succeeding.

The company has been more adept at keeping costs down than its counterparts, and it is projecting a medical care  ratio of between 81% and 82% this year. The trend is consistent enough that management initiated a quarterly dividend of $1 per share earlier this year.

The trend is set to continue

Consolidation in the healthcare industry in recent years has given some insurers the reach to control costs across the patient journey. UnitedHealthcare, Anthem, and Cigna are good examples. While a proposed merger between Anthem and Cigna was blocked in 2017, the latter proceeded to acquire a large pharmacy benefits manager a year later. The move gave the insurer more negotiating power with respect to drug costs. Similarly, UnitedHealthcare has an $87.5 billion pharmacy benefits manager -- OptumRx -- under its corporate umbrella. It's no wonder the two are able to keep more of each dollar of premium collected than Anthem.

As CMS continues to make cost-curbing moves, the insurers will take their cue and add more of their own controls and audits. Although that will likely make it increasingly difficult to get reimbursed, it means the companies keep more of the premiums as profits. Given recent decisions by CMS, expect the trend to continue as the country's aging population costs more to care for every year.