Please ensure Javascript is enabled for purposes of website accessibility
Log In Help Join The Motley Fool
Free Article Join Over 1 Million Premium Members And Get More In-Depth Stock Guidance and Research
By Jim Halley - Jun 28, 2021 at 10:31AM

The pharmaceutical company had a solid first quarter and boasts a nice pipeline.

Shares in Chinese pharmaceutical company BeiGene (BGNE -1.36%) are up more than 34% this year, and more than 79% over the past 12 months. The company is coming off a strong first-quarter report, has two potential blockbuster cancer drugs in Brukinsa and Tislelizumab, and has lucrative collaboration projects with Novartis, Amgen, and Bristol Myers Squibb.

In short, there's plenty of fire to back up the optimistic smoke regarding the stock. The Chinese pharmaceutical industry is the second-largest in the world behind the United States, and like the U.S., an aging population in the country is driving increased sales. 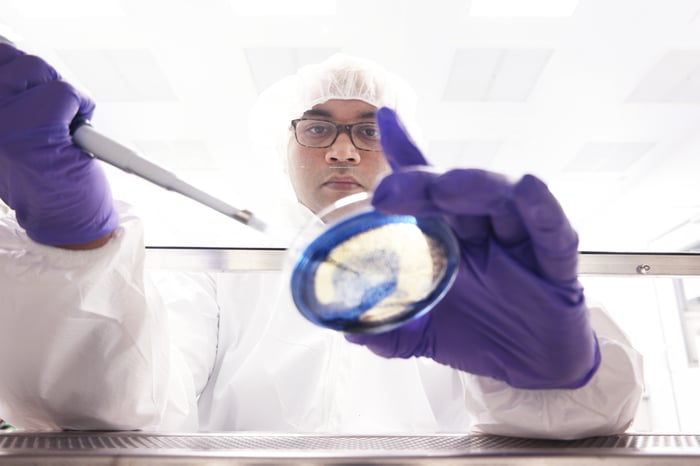 The company reported first-quarter revenue of $605.9 million, compared with only $52 million in the same period in 2020. The largest part of that growth came from collaboration revenue, which came in at $499.8 million (compared with $0 the year before). Product revenue was also up 104% year over year to $106 million in the quarter. The company cited increased patient demand for its products after three oncology drugs -- Tiselizumab, Brukinsa, and Xgeva -- were included in China's National Reimbursement Drug List (NRDL) for the first time as of March 1.

BeiGene also closed its license and collaboration agreement with Novartis regarding Tislelizumab in the quarter. BeiGene, which developed the drug, is selling it in China, but Novartis will market it in North America, Europe, and Japan; in return, Novartis is paying BeiGene up to $2.2 billion, including a $650 million upfront payment, pending sales targets and regulatory approvals.

Novartis just said that Tiselizumab met a phase 3 trial endpoint, showing an improved overall survival rate compared to chemotherapy as a therapy for esophageal squamous cell carcinoma. Novartis also has the drug in a phase 2 trial to treat a certain subset of solid tumors.

BeiGene is becoming a way for other international pharmaceutical companies to gain access to China's huge market -- in return for a nice payout. BeiGene signed an agreement with Amgen to sell three of that company's oncology drugs in China: Xgeva, Kprolis, and Blincyto, with a 50-50 profit split on the sales.

The company also posted positive net income in the quarter for the first time since 2017, with $66.5 million, compared to a loss of $364.9 million in the same period last year.

There are some concerns

BeiGene works with some advantages in its sales within China, due to the way the business of healthcare is structured in the country. It's a lot easier, for example, for Chinese companies to have their drugs placed on the National Approved Drug List than it is for foreign pharmaceutical companies.

There are a couple of disadvantages that BeiGene does have to deal with, however. The Chinese healthcare bureaucracy is byzantine and the country's drug approval process moves glacially. It approved just 46 new drugs last year (including 17 domestically developed drugs), down from 53 the year before.

Moreover, with the Chinese government in charge of healthcare, there are more price controls on drugs than in other developed nations.

The big two and what they do

Brukinsa (zanubrutinib) is a bruton tyrosine kinase (BTK) inhibitor that blocks an enzyme that is part of the B-cell receptor pathway. A BTK inhibitor can slow the spread of certain B-cell leukemias and lymphomas. The best known BTK inhibitor is Imbruvica, which had $4.3 billion in sales last year for AbbVie and $1.1 billion in sales for Johnson & Johnson.

Like Imbruvica, Brukinsa has the ability to treat several types of cancer, and it may end up being more effective and safe than most competitors. In a study of patients who had previously been treated for chronic lymphocytic leukemia (CLL), Brukinsa had fewer heart side effects while shrinking tumors more effectively than Imbruvica, according to BeiGene's phase 3 Alpine trial. The company said it also expects results from its phase 3 Sequoia trial on newly diagnosed CLL patients this year as well.

Earlier this week, the company got conditional approval in China to use Brukinsa as a therapy for relapsed or refractory Waldenström's macroglobulinemia (WM), a rare form of lymphoma, in adults. The drug had fared well in a Phase 2 trial. It is the third approval in China for the drug.

Tislelizumab, another utilitarian oncology drug, is the first product BeiGene brought to market. This antibody, which is being developed to fight a broad spectrum of solid tumor and blood cancers, helps prevent tumors from evading cancer-killing white blood cells. Novartis's deal with BeiGene will allow it to market the drug in the United States, Canada, Mexico, the European Union, Britain, Norway, Switzerland, Iceland, Liechentstein, Russia, and Japan, subject to regulatory approvals. Meanwhile, BeiGene will sell Tislelizumab in China, where it is approved for non-small cell lung cancer, classical Hodgkin's lymphoma, and metastatic urothelial carcinoma.

Last year, BeiGene made $163.3 million on Tiselelizumab in China, and it also has trials ongoing for the drug to be used for various types of lung, gastric, and liver cancers. Earlier this month, the company also got a supplemental biologics license in China for the drug to be used for another subset of solid tumors. And in May, the company reported a positive phase 3 trial for the drug, in combination with chemotherapy, as a first-line therapy for recurrent or metastatic nasopharyngeal cancer. 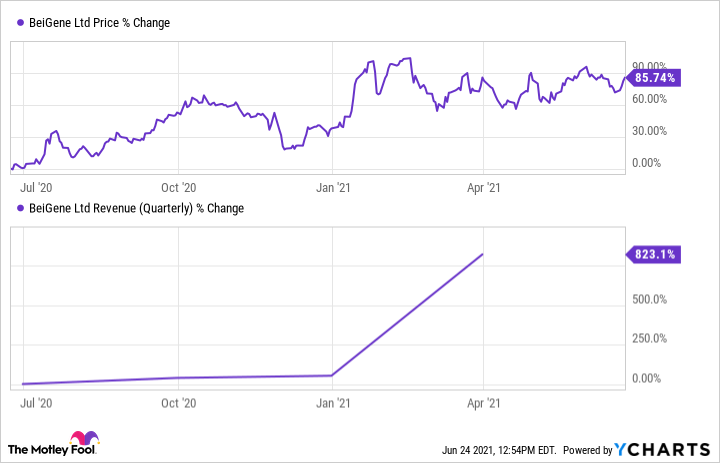 In May, Pamiparib became the third BeiGene-discovered medicine to get regulatory approval. It was developed for patients with mutation-associated advanced ovarian, fallopian tube, or primary peritoneal cancer who have been treated already with two or more lines of chemotherapy. The approval from the Chinese National Medical Products Association (NMPA) is conditional, dependent on the drug's trials. In early June, the company released data from a phase 2 trial that showed Pamiparib showed efficacy in HER-2 negative breast cancer patients.

The biotech company's growing profits and strong pipeline bode well for investors. To me, it appears to be on the cusp of breaking out, so I definitely see the stock as a buy. On top of that, its edge as a gateway for other companies to gain access to the Chinese market seems to be growing. The success of Brukinsa and Tislelizumab should help fund the rest of the company's research and development.