Please ensure Javascript is enabled for purposes of website accessibility
Log In Help Join The Motley Fool
Free Article Join Over 1 Million Premium Members And Get More In-Depth Stock Guidance and Research
By Brett Schafer - Jun 30, 2021 at 6:20AM

The Oracle of Omaha may be going after the candy giant.

Last week, a report came out that Hershey's (HSY 0.17%) corporate jet recently flew to Omaha, Nebraska, where Warren Buffett's conglomerate Berkshire Hathaway (BRK.B 1.26%) (BRK.A 1.35%) is headquartered. It's unknown what the jet was doing in Omaha, but analyst Don Bilson of Gordon Hackett's research team speculated that the Oracle of Omaha may be looking to acquire the chocolate company.

Bilson has been right with these reports in the past, predicting Berkshire's financing of Occidental Petroleum's takeover of Anadarko Petroleum after tracking the company's jet back in 2019. What would a Hershey deal mean for Berkshire Hathaway? Let's take a look. 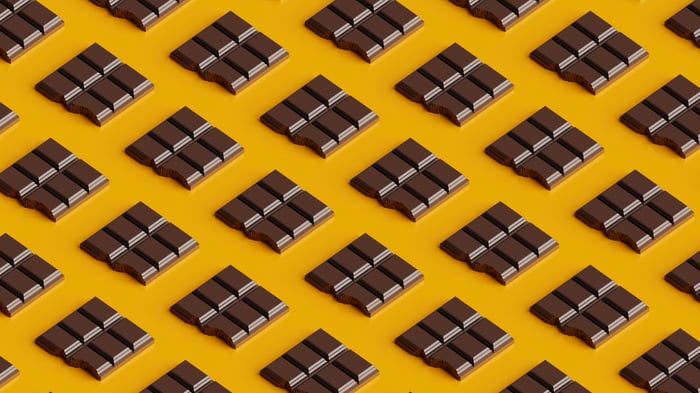 Milton Hershey founded the Hershey Chocolate company more than 125 years ago. In 1900, the first Hershey bar was sold, and the company hasn't looked back since.

Hershey's still sells its famous chocolate bars around the globe but has bought and incubated many other candy and snack brands over the years. Its current portfolio includes popular brands like Hershey bars and kisses, Reese's, Twizzlers, and Ice Breakers. It also has new, health-focused brands like Skinny Pop, which have helped the company grow, as well.

The business is as steady as it comes

Chocolate and candy bars may be considered simple or even "boring" by many investors, but Hershey's stock has put up fantastic returns over the long haul. Since 1972, shares have gone up 14,000%, while the S&P 500 has "only" grown 4,000% over that time span. And those returns don't include the consistent dividend Hershey pays out to shareholders, which currently yields 1.84%.

Why has Hershey's stock done so well over the long term? There are many factors, but the main reason is that it has consistently grown its free cash flow. Before 2000, Hershey generated well below $500 million in free cash flow a year. Over the last 12 months, it generated over $1.6 billion in free cash flow. Couple that with the fact Hershey's share count has gone from 360 million in 1992 down to 206 million today, and you can see why the stock has done so well over the decades. 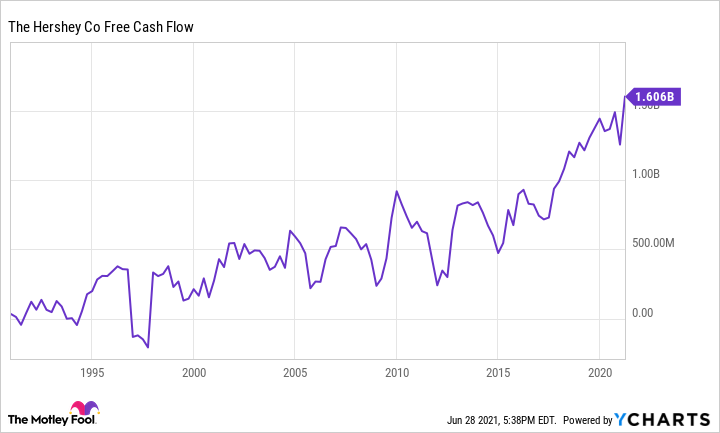 What it could mean for Berkshire Hathaway

Hershey has all the makings of a Berkshire Hathaway subsidiary. Buffett already owns junk-food companies like Sees Candies and Dairy Queen, while also owning large chunks of Coca-Cola and McDonald's stock. He loves businesses that are incredibly predictable like candy, which is why investors speculate he would love owning Hershey under the Berkshire umbrella. And while many governments are cracking down and regulating sugar consumption around the world, people will likely be consuming chocolate 50 years from now, just as they did 50 years ago.

On top of being a Buffett-style business, Hershey's may only have one suitor -- Berkshire. The Hershey Trust Company has over 80% of the voting rights of Hershey stock and likely doesn't want a buyer that would interfere with the business operations. Berkshire Hathaway famously has a hands-off approach with its subsidiaries, which could help in negotiations with Hershey shareholders.

One thing Buffett may not like is the price he would have to pay to acquire the Hershey company. The stock currently trades at a market cap of $36 billion, giving it a price-to-free-cash-flow (P/FCF) of 22.5. This doesn't look expensive on a trailing basis, but Buffett hates to overpay for a business and would likely need to offer a decent premium to Hershey's current market cap to convince the Hershey Trust to sell.

With over $145 billion in cash on its balance sheet, Berkshire has plenty of ammo to do a Hershey deal. Unless he can get it at a reasonable price, however, Buffett's unlikely to pull the trigger and buy the Hershey company.