Stocks had a great first half of 2021. However, for those following the Nasdaq Composite (NASDAQINDEX:^IXIC), the month of July didn't get off to the best of starts. Even as other major market benchmarks posted modest gains, the Nasdaq  was down about a tenth of a percent as of 12:15 p.m. EDT on Thursday.

Holding the Nasdaq back were two key earnings reports from major companies listed on the exchange. Walgreens Boots Alliance (NASDAQ:WBA) and Micron Technology (NASDAQ:MU) both had things to say about the current state of the market, but shareholders didn't seem to like everything they heard. Below, we'll look more closely at the reports and what implications they have for the broader stock market.

A little less financially healthy at the drugstore chain

Shares of Walgreens were down almost 6% near midday on Thursday. The drugstore chain showed signs of continuing growth, but investors weren't satisfied with the numbers.

Walgreens reported a big turnaround from last year. Fiscal third-quarter sales were up more than 12% year over year, and Walgreens reversed a year-ago loss with adjusted earnings of $1.51 per share, which exceeded some expectations. Moreover, Walgreens boosted its earnings growth estimates for the full year to about 10%. 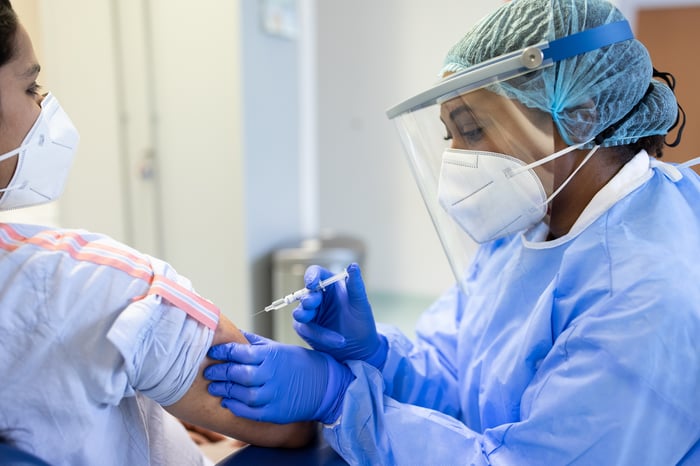 COVID-19 vaccination activity provided a significant boost to Walgreens' numbers. The drugstore chain reported administering more than 25 million vaccinations to date. However, the company did say that it expects that number has peaked and that it will administer fewer vaccination doses in the fiscal fourth quarter.

At this point, that assessment might well be overly pessimistic from a business standpoint -- and overly optimistic in terms of public health. Many see the need for vaccinations continuing further into the future, especially if anticipated booster shots become necessary later this year or in 2022. For now, though, Walgreens shareholders are disappointed with the downbeat outlook and can only hope that things turn out better.

Similarly, shares of Micron Technology were down more than 5% after the company reported its fiscal third-quarter financial results. The drop came despite numbers that looked quite strong.

Micron saw a lot of positive things happen during the quarter. Revenue jumped 36% from the year-ago period, and Micron posted adjusted earnings of $1.88 per share, more than doubling from the same quarter last year. Operating cash flow soared more than 75% year over year.

Moreover, Micron sees the good times lasting into the current quarter as well. Guidance for the fiscal fourth quarter included revenue of $8 billion to $8.4 billion and adjusted earnings of $2.20 to $2.40 per share.

However, stock analysts weren't entirely pleased with what they heard out of Micron. In particular, one analyst downgraded the memory chip maker's stock because of the belief that current shortages aren't likely to persist too much longer into the future. That's a popular opinion, but it's not universally shared among investors, with some arguing that the extent of the pandemic-caused shortage could make the current upward cyclical move longer than it would otherwise be.

Nasdaq investors need to remember that even when companies release favorable fundamental news, it doesn't necessarily translate into immediate share-price gains. In the long run, it'll be up to Walgreens and Micron to show that they can continue to deliver solid results in the future.