Please ensure Javascript is enabled for purposes of website accessibility
Log In Help Join The Motley Fool
Free Article Join Over 1 Million Premium Members And Get More In-Depth Stock Guidance and Research
By Beth McKenna - Jul 3, 2021 at 9:45AM

The pandemic has been a tailwind for pet ownership, which could benefit this dog and cat medical insurance provider over the long term.

Trupanion (TRUP -0.57%) stock soared 27.7% last month, according to data from S&P Global Market Intelligence. This pop was probably driven by some investors viewing the stock as an attractive buy after the sell-off that began earlier in the year.

Despite pulling back since February, shares of the provider of medical insurance plans for cats and dogs (which held its initial public offering in 2014) gained 169% over the one-year period through July 2. The broader market returned 41.2% over this period. 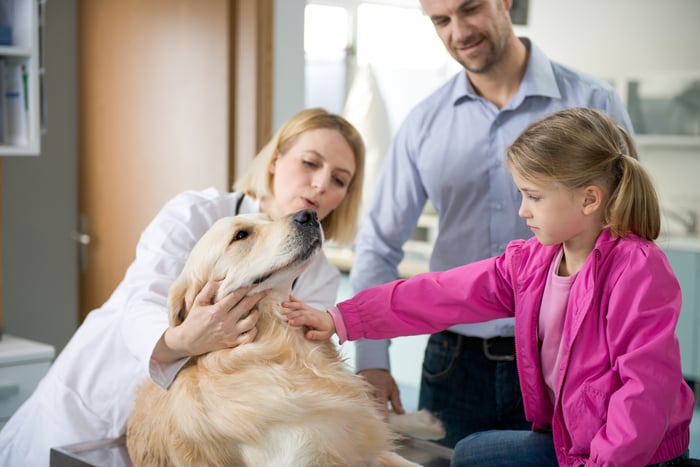 Trupanion issued several press releases last month, but individually none of them seemed to be a notable catalyst for the stock's 28% rise in June, as this gain was gradual. There also weren't any Wall Street upgrades of the stock last month.

We can probably attribute the stock's June pop to some investors scooping up shares on the belief that the stock's recent sell-off has been overdone. From their all-time high, set in early February, shares plunged about 42% until stabilizing in early April.

Trupanion has been growing revenue briskly. In the first quarter, its top line jumped 39% year over year to $154.7 million, driven by a 27% increase in its subscription business to $113.3 million.

While Trupanion hasn't yet announced a date for the release of its second-quarter results, it should do so sometime in early August.

For the second quarter, Wall Street is expecting the company's revenue to surge 40% year over year to $164.9 million. On the bottom line, analysts project a loss of $0.12 per share, compared with earnings per share of $0.04 in the year-ago period.

Trupanion stock is worth putting on your watch list. The company is the leader in a market with significant growth potential. There are about 180 million pet dogs and cats in North America, according to the company's June 2021 investor presentation. Only about 1% of U.S. pets and 2% of Canadian pets are covered by pet insurance, compared with a much higher percentage in other similar overseas markets, such as the U.K., where this percentage is about 25%, per Trupanion.

Moreover, the total number of pets in North America has been rising at a faster-than-usual clip recently, driven by the COVID-19 pandemic.

For more on Trupanion, you can read why my colleague Sean Williams think it's one of five growth stocks that have the potential to return at least 500% this decade.