Please ensure Javascript is enabled for purposes of website accessibility
Log In Help Join The Motley Fool
Free Article Join Over 1 Million Premium Members And Get More In-Depth Stock Guidance and Research
By Keith Speights - Jul 13, 2021 at 5:52AM

There's a bit of a brouhaha over booster doses.

Pfizer (PFE 0.42%) and Moderna (MRNA -6.45%) have enjoyed good working relationships with both the Centers for Disease Control & Prevention (CDC) and the U.S. Food and Drug Administration (FDA). The FDA granted quick approvals to both drugmakers' COVID-19 vaccines last December. The CDC has encouraged Americans to receive both vaccines.

However, some might now think that the honeymoon is over. Pfizer and Moderna have recently expressed support for booster doses. The CDC and FDA issued a joint public statement last week that appeared to contradict this view. Here's why the two federal agencies just slapped down Pfizer and Moderna. 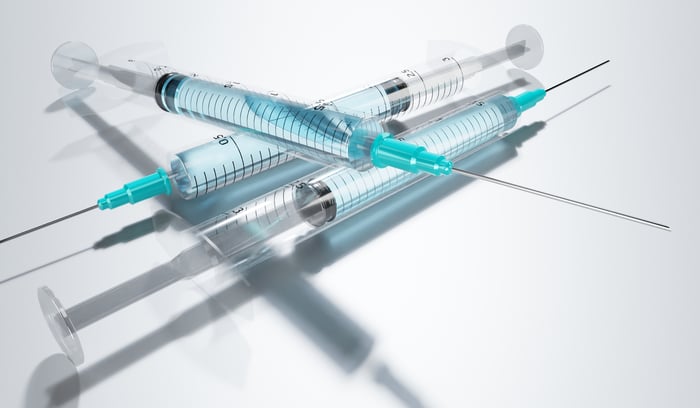 A quick and forceful response

On July 8, Pfizer chief scientific officer Mikael Dolsten told Reuters in an interview that his company and its partner, BioNTech (BNTX -7.14%), plan to soon file for U.S. and European emergency use authorizations (EUA) for a third booster dose. In a separate interview on the same day with CTV News Channel, Moderna co-founder Derrick Rossi said that "a booster is almost certainly the way."

Rossi doesn't serve on Moderna's management team or board of directors, so his comments didn't represent the biotech's official stance. However, Moderna CEO Stephane Bancel stated in the company's first-quarter conference call: "We have said for right now that we believe booster shots will be needed as we believe that the virus is not going away."

Later in the day on July 8, the CDC and FDA issued a joint statement on vaccine boosters. The agencies stated:

Americans who have been fully vaccinated do not need a booster shot at this time. FDA, CDC, and NIH are engaged in a science-based, rigorous process to consider whether or when a booster might be necessary. This process takes into account laboratory data, clinical trial data, and cohort data -- which can include data from specific pharmaceutical companies, but does not rely on those data exclusively. We continue to review any new data as it becomes available and will keep the public informed. We are prepared for booster doses if and when the science demonstrates that they are needed.

The CDC-FDA statement appeared to be a direct slap-down -- especially to Pfizer. But why would the agencies respond so quickly and forcefully? The main reason is probably that they don't want to worry Americans who have already been vaccinated, nor give any reason for unvaccinated individuals to delay receiving a vaccine.

However, I suspect that the FDA, in particular, also had another motivation. The agency doesn't want to be viewed as having too cozy of a relationship with any drugmaker. It has been heavily criticized for the process followed in approving Biogen's Alzheimer's disease drug Aduhelm. FDA Commissioner Dr. Janet Woodcock even requested an independent investigation into interactions between the agency's staff and Biogen during the review process for the drug.

Despite the seeming squabble, I don't think that the CDC and the FDA are really in direct opposition to what Pfizer and Moderna have said. There are several similarities between their public statements.

Both sides agree that the currently available messenger RNA (mRNA) vaccines remain effective at preventing COVID-19. Both also look to data to form their views.

Pfizer and BioNTech stated last week that their initial data indicates that a third booster dose generates significantly higher antibody levels than only two doses -- five to 10 times more. The CDC and FDA haven't seen this data yet, though. Pfizer and BioNTech expect to submit the data to the FDA as well as to the European Medicines Agency and other regulatory authorities within the next few weeks.

The differences between the CDC-FDA view and Pfizer-BioNTech-Moderna perspective appear to be mainly related to timing. The drugmakers believe they've seen enough data to know now that booster doses will be needed, while the federal agencies think they need to see more data but aren't ruling out the potential need for booster doses.

Clearly, Pfizer, BioNTech, and Moderna benefit financially if booster doses are needed. The more COVID-19 vaccine doses are required, the higher the companies' sales will be and the better the vaccine stocks will likely perform.

Government agencies aren't (or at least shouldn't be) concerned with how much money any of these companies make. However, they are responsible for promoting public health. If booster doses are what it takes to effectively fight the spread of COVID-19, they'll be authorized.

My hunch is that the recent real-world data from Israel gives a good clue as to what will happen going forward. That data found only 64% efficacy of the Pfizer-BioNTech vaccine against COVID-19 overall, down from 94% a month earlier, primarily because of the spread of the delta variant. If a third booster dose can get efficacy closer to the initial level, it would be shocking if authorizations aren't granted.

Pfizer, Moderna, the CDC, and the FDA might not always be in harmony. However, I predict they'll soon be singing from the same page when it comes to the need for booster doses.