After breaking through $3,500 in September, Amazon's (NASDAQ:AMZN) stock price stayed stagnant for many months. Interestingly enough, it was news of Jeff Bezos' departure as CEO and Andy Jassy's promotion to that position that helped lift the shares last fall. Now that Jassy has officially taken over the reins, Amazon stock has jumped 7% in July breaching the $3,700-mark for the first time. That's a lot of investor confidence in Jassy's leadership.

Airbnb (NASDAQ:ABNB) stock, on the other hand, hasn't fared quite as well this year. The biggest IPO of 2020 got off to a roaring start when it debuted on the stock market in December, but it has since dropped and is about flat year to date. Is there less reason to be confident in Airbnb's future? Let's take a look. 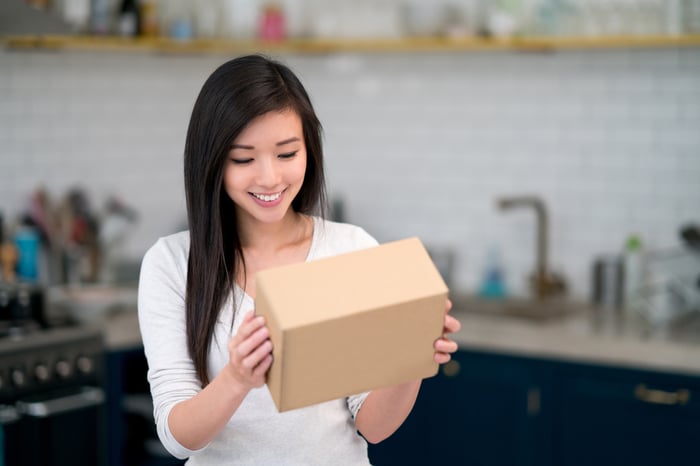 The king of e-commerce

Amazon is no secret. It dominates online retail and is arguably on track to become the largest company in the world by sales within the next few years. While prior results are no guarantee of future outcomes, there's every reason to believe that Amazon has what it takes to keep up its phenomenal expansion in the retail world. Digital exploded during the first year of the pandemic, and it's still gaining steam. Amazon has entered new markets such as the pharmacy segment over the past year, and it's licensing its just-walk-out technology for brick-and-mortar retail. It's also made headway with its physical presence and Amazon Web Services (AWS).

Veteran Amazon executive Jassy spearheaded the creation of AWS, and was long considered a potential successor to Bezos. At the time of his retirement announcement, Bezos said: "Right now I see Amazon at its most inventive ever, making it an optimal time for this transition."

Amazon is still on a pandemic high. Its sales increased by 44% year over year in both 2020's fourth quarter and 2021's first quarter. Management has forecast that sales for the second quarter, which includes Prime Day, will increase between 24% and 30%. But the tech giant has a habit of beating guidance, and it will be a strong indication of how well it's doing in the wake of the pandemic-generated surge if it does so again.

Airbnb was battered by the pandemic last year, but now, it's showing signs of recovery. It even posted a 5% revenue increase in 2021's first quarter. That's significant, since travel is still slow and the hospitality industry as a whole is still reeling. A family having a picnic in front of an Airbnb rental. Image source: Airbnb.

Most of Airbnb's rebound was fueled by a different style of vacationing and rental usage. There was an uptick in longer stays and more domestic bookings, which reflected the company's ability to adapt as circumstances changed. To that end, it recently upgraded its system with more than 100 modifications to make hosting easier and booking simpler.

Airbnb's model as a platform, instead of an asset-heavy institution, gives it room to expand quickly. New hosts can add properties to its offerings simply, and the company can offer accommodations in previously unexplored areas. That's one of the focuses of its recent platform revisions, and the company could double or triple in size as it recruits more hosts.

However, Airbnb has yet to post a profit, and its Q1 net loss was over $1 billion. That was due to several large, one-time charges, and it will be important to watch how much that shrinks in Q2. Management didn't provide Q2 guidance due to the unpredictability of the changing situation.

I would personally recommend both Amazon and Airbnb as stock picks. Each has strong potential to grow. However, Airbnb comes with a lot more risk. Risk often comes with a lot of reward, which is why I still see it as a buy -- there's enough opportunity to justify the risk here.

But Amazon also has tremendous opportunities, just with less risk. It's a no-brainer pick to shore up your portfolio, so if I had to choose one, I would choose Amazon.