Please ensure Javascript is enabled for purposes of website accessibility
Free Article Join Over 1 Million Premium Members And Get More In-Depth Stock Guidance and Research
By Charlene Rhinehart, CPA - Jul 17, 2021 at 6:06AM

Here's your opportunity to use the Roth IRA to its full potential.

Contributing to a Roth IRA (individual retirement account) might not seem like a surefire way to wealth until you take a peek at Peter Thiel's portfolio.

Last month, ProPublica released Roth IRA data for the tech entrepreneur and uncovered a $5 billion balance. The report revealed that Thiel only started with a $2,000 contribution in 1999, which was the annual limit at the time. He used his contributions to buy 1.7 million shares of PayPal Holdings (a company he co-founded) for $0.001 per share, bringing his total purchase to $1,700. Because of the Roth IRA's incredible tax-free growth and withdrawal feature, he'll be able to tap into his $5 billion Roth IRA balance 100% tax-free if he doesn't touch his investment until after age 59 1/2.

Building a billion-dollar Roth IRA is no easy feat for the average person, but learning about Thiel's Roth IRA strategy can help you tap into some benefits that you might have neglected. Here's a glimpse of what you can do to maximize your Roth IRA success. 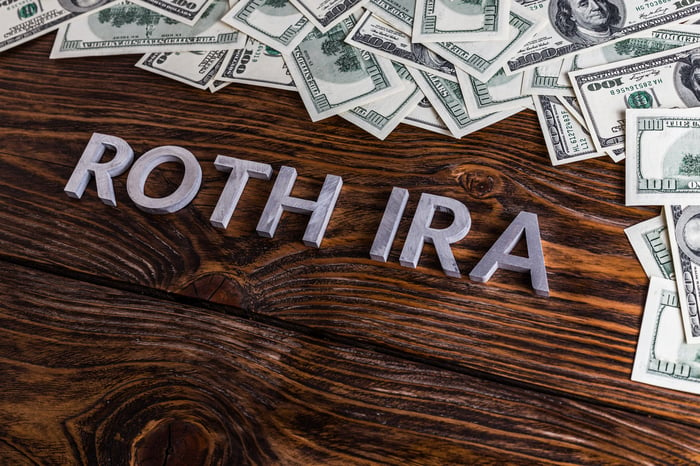 How a Roth IRA works

Let's start with the basics. The Roth IRA was started in 1997 and named after one of the co-sponsors of the law that created them, Sen. William Roth (R-Del.). The purpose of the Roth IRA was to encourage average working Americans to stash cash away for retirement. The incentives are attractive, boasting tax-free growth and withdrawals during retirement for those who contributed after-tax dollars to fund the account.

As alluring as the Roth IRA features appear, there are a few items to watch out for. First, you have to make sure your income doesn't exceed the annual thresholds. For example, single filers are not eligible to make direct contributions to a Roth IRA once their modified adjusted gross income (MAGI) exceeds $140,000.

Also, be aware of the contribution limits. Since the Roth IRA was designed to give more individuals a helping hand during retirement, you can tuck away a large chunk of money into this account every year. For 2021, contributions are capped at $6,000 for those under 50 and $7,000 for those 50 or older.

One overlooked feature of the Roth IRA is the ability to choose your favorite assets (within the constraints of the IRS rules) to put your contributions to work.

Thiel was among a select group with exclusive access to shares of PayPal before the company went public. This deal gave him a leg up. Unfortunately, most traditional brokerages will limit your purchasing power to assets that are held at their company, such as publicly traded stocks, bonds, and mutual funds. If this is what you are comfortable with, then keep collecting these assets in your portfolio. In 2019, the S&P 500 delivered an impressive 31% return. Although those strong returns don't come around every year, the stock market is a great way to build wealth over time.

However, if alternative assets are more your style, you can work with a trust company to diversify your portfolio mix. Thiel worked with a trust company to invest in private company shares. He invested in assets within his circle of competence and allowed the power of time and growth to deliver explosive returns over the long term. Again, you just have to know the rules and ensure that the assets you select meet the parameters of a Roth IRA.

Let's be clear: There's a high probability that you won't wake up with a billion-dollar Roth IRA by investing in traditional assets alone. But that shouldn't stop you from using the Roth IRA to build wealth. It's possible to reach the million-dollar mark if you start early, contribute consistently, and invest in high-quality assets.

For example, if you commit to contributing $6,000 to a Roth IRA every year for 40 years, you could turn $240,000 into more than $1 million. You just need to shoot for a 7% annualized rate of return, which isn't unreasonable over the long term. Even a 10% return is feasible and could get you to your million-dollar tax-free treasure in approximately 30 years. This all assumes that the Roth IRA contribution limit remains at least $6,000. If that increases and you qualify to contribute the maximum amount, you can accelerate your financial goals.

The way to wealth

Building wealth in a Roth IRA is not as challenging as it might sound. To sum it up, start contributing as much as possible so you can invest in assets that can help your portfolio explode in value. Enjoy tax-free gains forever (as long as you follow the rules) and use proceeds to invest in other assets that can supercharge your portfolio.

Here's the catch: You have to start strategizing now so you can tap into Thiel's ultimate Roth IRA secret. The secret sauce is being able to use the power of time, growth, and information to earn enough compound returns to fund your retirement lifestyle 100% tax-free.