Please ensure Javascript is enabled for purposes of website accessibility
Log In Help Join The Motley Fool
Free Article Join Over 1 Million Premium Members And Get More In-Depth Stock Guidance and Research
By Jim Halley - Jul 19, 2021 at 11:15AM

These three companies present strong opportunities for growth -- with a nice dividend to boot.

All three of these stocks, to me, are still underpriced, with price-to-earnings ratios that range from 9.929 for Delek Logistics to 17.10 for Tilly's to 21.56 for Medical Properties Trust -- all of which are significantly below other stocks in their sectors. 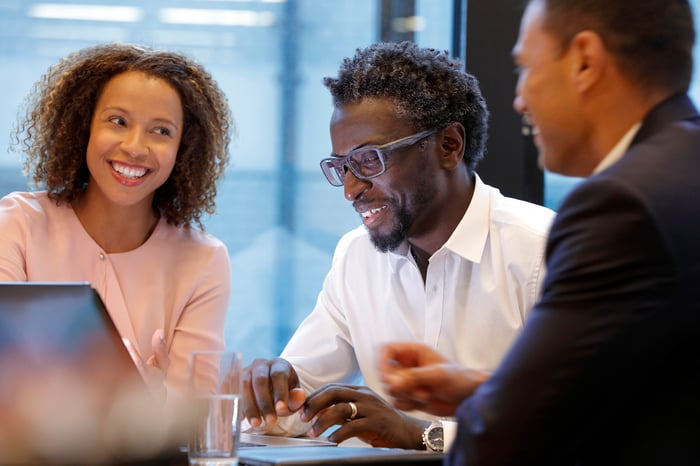 Delek Logistics' stock is up more than 30% this year, but despite that rise, the company's dividend still offers a solid yield of 8.63%. The energy company is a master limited partnership created by Delek US Holdings; it owns and operates crude oil and refined products as well as transportation assets.

Energy stocks have made a comeback this year, and Delek Logistics has ridden that rise. In the first quarter, the company reported net income of $36.3 million, up 30% year over year. The company's dividend works out to an annual yield of 8.7%, and it appears to be well covered by consistent cash flow stemming from long-term contracts.

The company's best feature is its commitment to dividend growth. Management raised its quarterly dividend by 1.1% to $0.92 a share in April, the 32nd consecutive quarter in which it posted an increase.

Tilly's is a nice dividend secret

Tilly's, a California-based clothing and accessories retailer with 244 stores nationally, has seen its shares rise more than 88% this year. The company doesn't pay out a quarterly dividend. However, since 2017, it has paid out a generous special annual dividend. In June, the company announced that, for the fourth consecutive year, the special annual dividend would be $1 per share. At its current price, that works out to an annual yield of 6.26%.

Like many retailers, Tilly's struggled during 2020 because of the coronavirus pandemic. Many of its stores were closed for long periods. Last year, the company saw total sales decrease 14.2% to $531.3 million, with a 31.3% drop in in-store sales. The company appears to have emerged stronger, however, with a better e-commerce presence following the pandemic.

The company's internet sales in the quarter were a reported $35.5 million, up 17% year over year. That e-sales continue to do well even with Tilly's stores opening up shows that the business has made long-term gains in e-commerce.

Medical Properties Trust's shares have dropped by more than 8% this year, but its business remains stable. In April, the most recent month reported, the company said it collected 96% of its rent. The real estate investment trust (REIT) owns 431 hospital facilities and collects rent on them through triple-net, inflation-protected, long-term leases. It raised its quarterly dividend by 3.7% in June to $0.28 per share, giving it a yield of about 5.43% at its current share price.

I like Medical Properties Trust for its consistent cash flow and its record of raising its quarterly dividend for eight consecutive years. The long-term prognosis for hospitals is strong because of aging populations in the U.S. and Europe. The company's portfolio is diversified, with no single operator accounting for more than 2.6% of the company's real estate holdings.

Since the company's initial public offering in 2005, it has given shareholders a total return of 555%, far outstripping the S&P 500's 387% total return over that period. 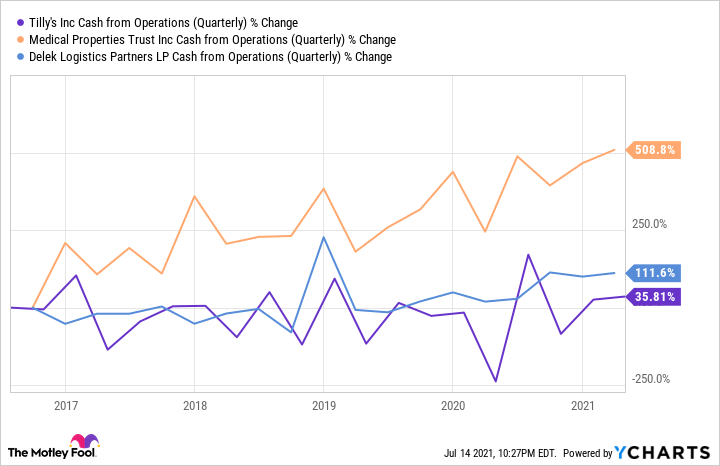 Making the most of the possibilities

Of the three companies listed, I like Medical Properties Trust the most, even though its dividend has the lowest yield. Two things bode particularly well for the business in the long term -– management is committed to growing a dividend, and the need for hospitals is only expected to grow. I think the current share-price dip presents an opportunity to get in on a solid value stock with a strong dividend at a good price. Of the three dividend stocks, Medical Properties Trust has had the most growth in cash from operations over the past five years.

Delek Logistics has the best dividend of the three, has an even better record of dividend increases, and has also done a good job of increasing cash from operations. The only reasons why it's No. 2 are the current administration's push for alternative fuels and the volatility of energy stocks, which was made particularly evident last year.

Tilly's dividend and comeback story so far this year make the stock a hidden gem. My only concern with the special dividend is that despite its recent history, it isn't guaranteed. However, the company's push for more e-commerce sales appears to be paying off, and combined with the special dividend, has provided a nice total return of 259% over the past five years. Momentum is on this company's side.