Well-read investors often find that they can draw parallels between other branches of knowledge that help inform their financial decisions. One such lesson I've always found useful comes from the realm of physics -- Newton's first law of motion: An object in motion tends to stay in motion unless acted upon by an outside force.

That principle can be applied fairly well to the strategy of investing in successful companies. Put another way, winners have a tendency to keep winning.

When a stock is red hot, there are usually good reasons why, so focusing on companies that are firing on all cylinders and have already delivered significant gains to shareholders is one way to increase the likelihood that the stocks you buy will reward you. With that in mind, here are three stocks whose prices have doubled over the past couple of years and still appear well-positioned to double again in the near future. 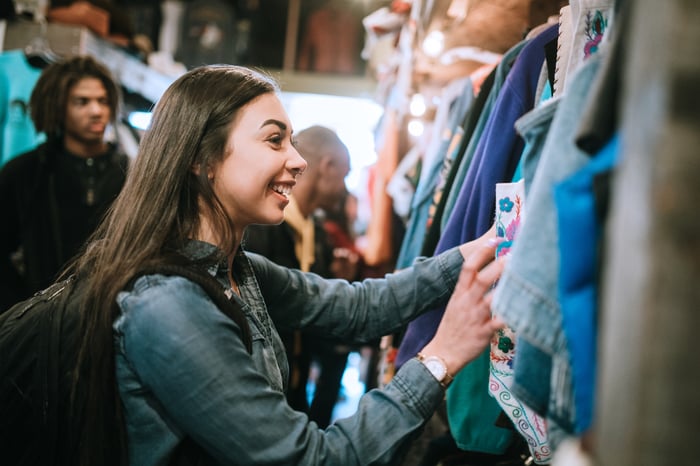 Etsy: Not just a COVID-19 play

Prior to the pandemic, Etsy (NASDAQ:ETSY) had already established itself as the premier online purveyor of custom and handmade products, as well as craft supplies and vintage goods. On its platform, buyers can find a seemingly endless supply of one-of-a-kind items. Demand for those offerings accelerated last year and shows no signs of slowing.

Etsy enjoys a scale no other handmade goods seller can match. It offers 92 million unique products for sale with 4.7 million active sellers and more than 90 million active buyers. Gross merchandise sales -- i.e., the total value of products sold on Etsy's platform -- grew 132% year over year in the first quarter. This helped drive revenue up 142%, while its profits surged more than 11-fold.

The company is focused on maintaining and even extending its gains from 2020. Management noted during the first-quarter earnings call that it was "laser focused on driving frequency" and identifying "buyer triggers." As one example, management highlighted its update tab, "It's very encouraging to see that now 13% of app visits include a visit to the updates tab, and 27% of those visits have buyers clicking on one or more of the listings that we include in updates." This helps illustrate the lengths Etsy is going to continue to engage shoppers and grow sales.

The company has carved out a unique and lucrative niche for itself in the world of e-commerce, and the results for investors are telling: The stock quadrupled in 2020 and could double again from here. Pinterest (NYSE:PINS) rose to prominence by bucking the negative stereotypes associated with social media and instead providing a dose of positivity. The platform acts as a visual discovery engine, encouraging users to find and pursue their passions. It's a digital repository where users find and "pin" things they are interested in from across the internet, motivating and inspiring them to take up hobbies, travel, new recipes, and more.

Spreading positivity has been lucrative. Revenue grew 78% year over year in the first quarter, and Pinterest cut its net loss by 85%. Its count of global monthly active users grew 30%, while its average revenue per user (ARPU) was up 50%.

It's the company's international results that should have investors most excited: Foreign revenue and ARPU surged 170% and 91%, respectively. Pinterest is building its international business following the strategic plan that worked so well in the U.S. -- focus first on the fundamental infrastructure and build the user experience, then scale and monetize later. CFO Todd Morgenfeld said during the first quarter earnings call that the company is "running the same playbook" and expects this already successful template to pay worldwide dividends in time.

Management also expects the good times to continue, guiding for revenue growth of 105% in the second quarter. This helps explain the stock's 170% gain over the past year and illustrates its potential for future growth. 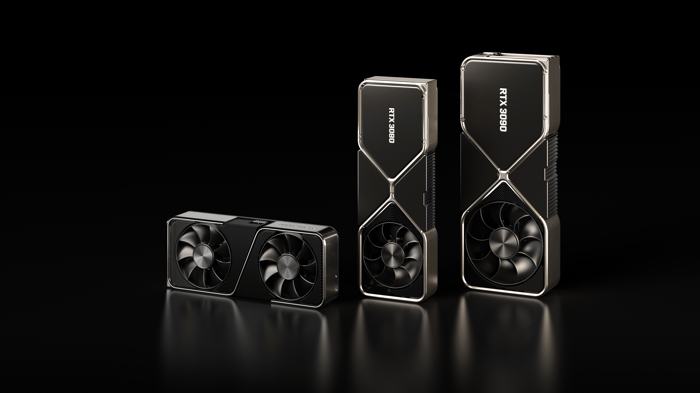 NVIDIA: So. Many. Tailwinds.

When it comes to graphics processing units (GPUs), no company holds a candle to NVIDIA (NASDAQ:NVDA). It pioneered these processing chips that allow PCs and consoles to render lifelike images in video games, and it's the undisputed leader in the discrete desktop GPU space with an 81% share of the market as of the first quarter of 2021. As a result, NVIDIA's gaming segment sales grew 106% year over year in its fiscal 2022 first quarter. That alone could be reason enough to invest in the stock.

The gaming market, however, might not be NVIDIA's biggest profit engine in the years to come. Its cutting-edge chips and accompanying software have become the industry standards in a number of accelerating technologies, including cloud computing, data centers, and artificial intelligence. NVIDIA's data center sales, which are being driven by all of those important secular trends, rose 79% in the latest period, and there's still a long runway for growth ahead.

Finally, the company has partnerships with a growing number of automakers that are working to develop autonomous driving systems. Once they achieve a level of reliability sufficient to allow such cars to be sold, NVIDIA will no doubt have a seat at the table as its processors will likely underpin the new technology. While its sales for autonomous driving systems currently amount to just a minuscule part of the top line, that could change if production of self-driving cars shifts into high gear.

The company's stellar execution and the growth of its end markets have helped propel NVIDIA stock upward by more than 80% over the past year alone -- leading to the company's decision to perform its highly-anticipated stock split. 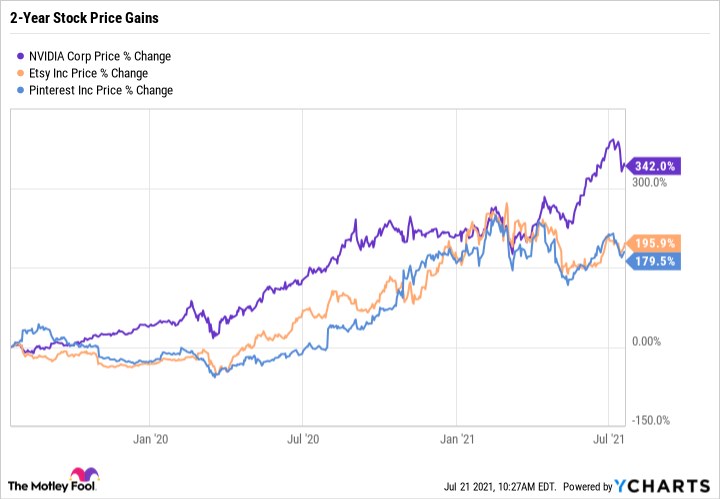 It's important to remember that there's no such thing as a free lunch in investing. While each of these companies has executed to a high degree over the past several years, there's no guarantee that they will continue to do so. Additionally, even a near-perfect performance can sometimes result in a falling stock price -- at least in the short term -- particularly if external factors like a market correction come into play.

There's a trade-off that comes from investing in potential multibaggers. Each of these companies is a high-risk, high-reward option, which comes with an equally high price tag, like so many other high-growth stocks. NVIDIA, Pinterest, and Etsy are selling at 19 times, 17 times, and 11 times forward sales, respectively, when a reasonable price-to-sales ratio is generally between one and two.

That said, based on these businesses' current trajectories, their stocks remain solid bets to beat the market over the next three to five years -- with the potential to double along the way.