Last week, connected fitness company Peloton Interactive (NASDAQ:PTON) announced the forthcoming release of Lanebreak, an in-app video game users can play on its well-known exercise bike. When the game launches to all subscribers this winter, users will be able to work out while using their pedaling speed and resistance knobs to play a music-centered, on-screen game and compare scores with other users.

Gamifying the Peloton experience could help the company keep users on its platform longer and attract new users who prefer a gamified experience over a traditional instructor-led class format. In fact, some would argue this move is necessary to keep Peloton ahead of the competition, and here's why. The pandemic boost was never guaranteed to last

Peloton closed its fiscal year 2020 (ended June 30, 2020) with a memorable bang. The company's revenue doubled year over year, mainly thanks to a blowout fourth quarter at the start of the pandemic. However, looking back a little further in time reveals that Peloton's year-over-year revenue growth had been decreasing for several quarters up until the pandemic skyrocketed the company's sales. 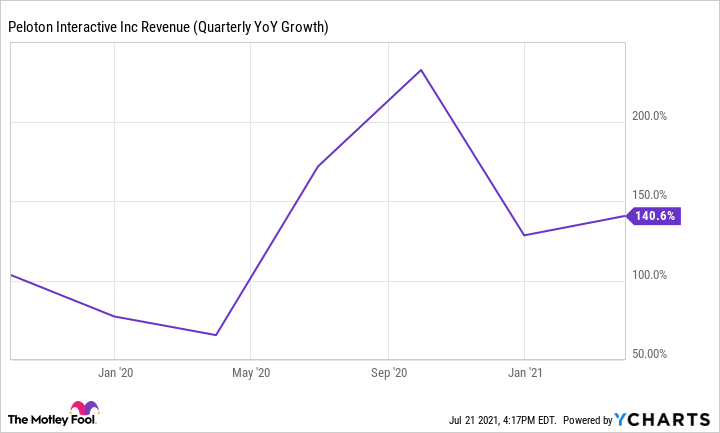 In other words, the company has exhibited impressive sales growth overall, but the inconsistent growth trend could imply that the company's pandemic-driven growth isn't sustainable. Its earnings have also slipped, decreasing in each of the last four quarters. While the company's subscriber count has grown from 3.1 million to 5.4 million so far in fiscal year 2021 (including digital-only subscribers), it still needs to prove it can translate subscribers into profits, scale its supply chain, and make its growth trend last.

For a growth stock trading around 150 times future earnings, sustainable growth -- and continued cutting-edge content development -- is to be expected at the minimum.

Peloton was beaten to the punch

What even the most devoted Peloton fans may not know is that a rival company called Playpulse has already developed and released a competing high-tech bike with a focus on gamifying exercise. The company will fulfill its current tier of pre-orders in December when new Playpulse owners will be able to compete in exercise-challenge games and binge on popular third-party streaming apps.

Beyond game-focused competitors like Playpulse, tech giants like Apple (NASDAQ:AAPL) and Lululemon Athletica (NASDAQ:LULU) are also entering the connected home fitness space. Apple's Fitness+ is an Apple Watch-based exercise-streaming service, and Lululemon's Mirror is a unique "smart gym" on a mirror-screen hybrid. Both cater to Peloton's higher-income target market, and both are contributing to the crowding up of the shrinking at-home fitness market overall as gyms and other in-person exercise classes reopen. 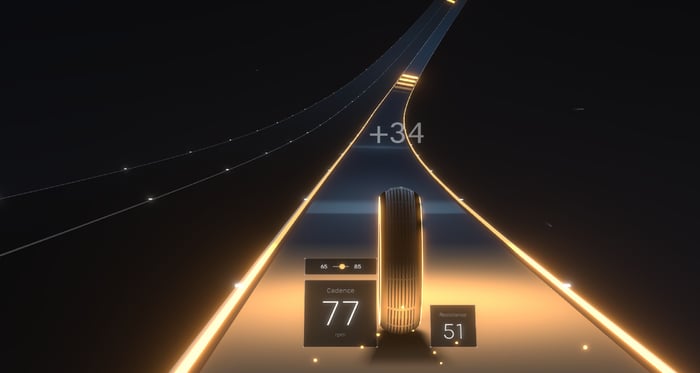 Following its massive pandemic-fueled growth period, Peloton now needs to compete effectively not only against other home exercise equipment and fitness streaming companies, but also against in-person activities like gyms, spin classes, and countless other exercise experiences.

Peloton's defense strategy should include giving users more entertainment options for their workouts in order to attract new customers who may not enjoy a traditional, coach-led class setting. A video game is a great first step to help the company defend and expand its market share in spite of more affordable competitors that offer more options for users and more varied in-person exercise experiences.

Above all, Peloton has a powerful premium brand because its exclusive training content is engaging, versatile, and effective. In order to keep its first-mover advantage and live up to its valuation, it makes perfect sense for Peloton to innovate new exercise experiences and entertainment options that can compete in a post-pandemic world.

While making video games and adding other first-party entertainment options for subscribers contribute to the company's premium brand, opening the floodgates to popular third-party streaming services could detract from its brand. Peloton's value proposition is rooted in its exclusive content, making third-party streaming services a somewhat counterintuitive offering.

For this reason, don't expect to watch your favorite TV show on a Peloton anytime soon like you can on a Playpulse. But do expect to see more high-quality, first-party content that doesn't fit into the mold of a traditional exercise class setting.

Without successful releases of unique content like Lanebreak, Peloton's first-mover advantage may fade away in the wake of competition and reopened gyms. So, until Peloton's numbers can justify its valuation, there are safer growth stocks to consider.