Please ensure Javascript is enabled for purposes of website accessibility
Log In Help Join The Motley Fool
Free Article Join Over 1 Million Premium Members And Get More In-Depth Stock Guidance and Research
By Will Healy – Aug 21, 2021 at 6:45AM

Investors can find reliable dividend growth without turning to Aristocrats.

Income investors looking for steady dividend growth often turn to Dividend Aristocrats. Their long track record of annual payout growth attracts stockholders looking for an inflation hedge, and some pay well over the 1.3% average cash return of the S&P 500.

However, some dividend stocks in the tech world offer growing, generous payouts but lack the minimum 25-year threshold needed for Aristocrat status. Given their cash returns and 10 or more years of payout hikes, stocks such as Broadcom (AVGO -0.70%), Cisco (CSCO -0.35%), and Verizon (VZ 0.26%) also deserve consideration. 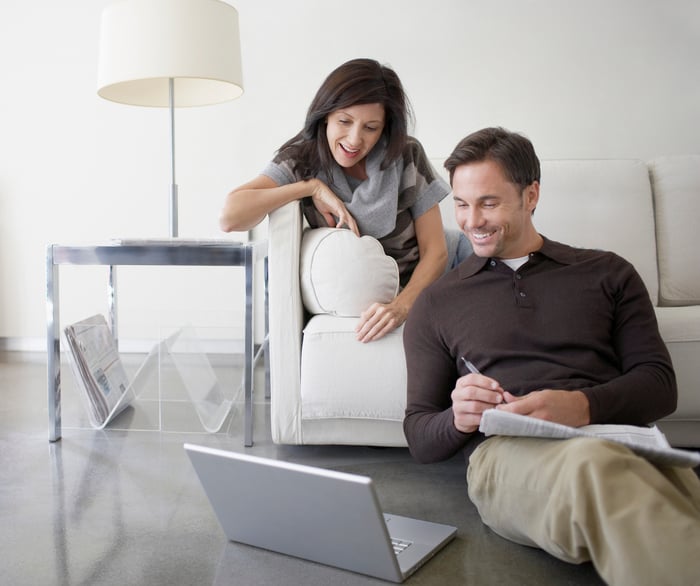 Amid its stock price growth and focus on semiconductors and software, Broadcom has evolved into a lucrative dividend stock. Its annual payout of $14.40 per share offers a cash return of about 3%.

Broadcom is financially equipped to continue meeting this payout. For the first six months of 2021, it generated over $6.4 billion in free cash flow, well above the $3.1 billion cost of dividends during that time.

Moreover, solid semiconductor and software divisions bolster this influx of cash. The semiconductor business has prospered, especially with its faster Wi-Fi 6E routers that reduce latency. Furthermore, its enterprise software offers security and management functions while increasing efficiency. Additionally, a research budget that amounted to more than $2.4 billion in the first six months of the year also fortifies such innovations and keeps Broadcom's products up to date.

Broadcom distributed its first dividend in December 2010, paying just $0.07 per share. The payout has risen every year since, and it has become one of the fastest-growing dividend stocks on the planet, surging over 50-fold to the current quarterly level of $3.60 per share. The 11% increase in the payout last year was its smallest increase, well below the hike in late 2016 which more than doubled the dividend.

Finally, this generous dividend has not slowed Broadcom's rising stock price, which increased by nearly 45% over the last 12 months. Even with a price-to-earnings (P/E) ratio of approximately 45, Broadcom should remain attractive given its product pipeline and overall returns.

Like Broadcom, Cisco has quietly evolved into a lucrative dividend stock. Its $1.48 per share annual payout yields around 2.6% at current prices.

This payout cost Cisco $4.6 billion in the first nine months of fiscal 2021. Nonetheless, since Cisco produced about $10.4 billion in free cash flow during that time, the company can afford its payouts to shareholders.

This is a huge about-face for a darling of the 1990s tech boom that used to avoid dividends. However, after briefly claiming the world's largest market cap in 2000, a massive drop led to a gradual change in focus.

As its networking equipment has become more commoditized, it has expanded its capabilities in other areas. Like Broadcom, it offers a Wi-Fi 6 solution. Additionally, it provides Internet of Things (IoT)-related offerings, a 400G product to bolster cloud infrastructure in data centers, and a video meeting solution called Webex that competes directly with Zoom Communications.

Cisco introduced its first dividend in March 2011, paying $0.24 per share that year. While not a fast-growing payout, the 10-year streak of dividend hikes has increased the payout by over sixfold since that time.

Also, given its rising dividend and technical improvements, Cisco may have begun to gain traction. Its stock price has increased by over 30% in the last year, and the P/E ratio now stands at 23, up from 16 one year ago. While it may not attract the excitement it generated in the 1990s, its rising growth and income could make it one of the more lucrative tech dividend choices.

Verizon currently pays its shareholders $2.51 per share annually, a dividend yield of 4.5%. To cover this cost, the company managed to generate $11.7 billion in free cash flow during the first two quarters of 2021. Free cash flow fell from $13.7 billion during the same period in 2020 amid increased network spending, but it easily covered the $5.2 billion in dividend expenses during that time.

The company has long funded its dividend by providing wireless and broadband services amid intense competition. However, the rise of 5G may have changed the game for Verizon. Thanks to 5G, it can now offer network-as-a-service (NaaS), a subscription-based data service that powers AI, IoT, and other applications.

Verizon has paid dividends since 1984, the year after the breakup of the original AT&T (T 0.16%) spawned its predecessor, Bell Atlantic. However, it did not begin to hike its payout annually until 2007. Also, it has only offered gradual dividend increases, typically amounting to between four and eight cents per share annually.

Still, since AT&T appears poised to slash its payout, Verizon presumably now offers a higher yield. Moreover, it trades at a P/E ratio of 12, lower than AT&T's earnings multiple of 19.

Admittedly, the 6% decline in Verizon stock over the last year doesn't represent the stock's appeal. Nonetheless, shares of Verizon have risen by 60% over the last decade. Considering the potential of 5G and its NaaS business, Verizon should not only maintain its annual dividend hikes, but should also see serious stock price growth in the years ahead.