Roblox (RBLX 1.80%) is one of the largest companies to debut on the public markets in the past 12 months. The social gaming and "3D metaverse" company saw a huge engagement boost on the back of the COVID-19 lockdowns last year, and it has ridden this momentum to further invest into its user-generated content (UGC) gaming platform.

On Aug. 17, the company reported another strong quarter of earnings but showed signs of a slowdown in recent months with the economy reopening. This caused investors to sell off the stock on the news (although it recovered a lot of the losses the next day).

Are investors being short-sighted with Roblox? Does the stock price being down more than 19% from 52-week highs set in early June provide a buying opportunity for this fast-growing company? Let's take a look. 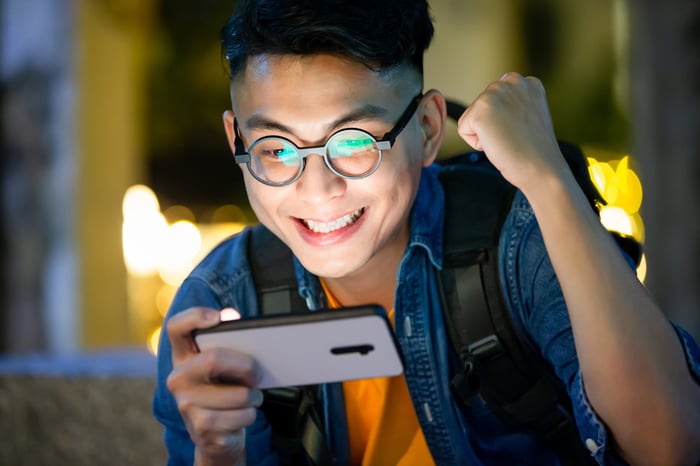 In Q2, Roblox grew revenue 127% year over year to $454 million. This is great growth, but since accounting rules require Roblox to defer revenue over a two-year period, the most important top-line number for investors to track is bookings, which tells you the total amount of dollars users spent to buy Robux, its virtual currency, in the period. In the quarter, bookings grew 35% year over year to $665.5 million.

This is a lot slower than revenue, but investors should remember that in Q2 of last year bookings grew an astounding 229%. Yes, growth slowed down a ton in the period, but you can't expect a company of this size to grow at 200% forever. Comparing Roblox's Q2 2021 bookings of $665.5 million to its Q2 2019 bookings of $150 million shows how fast its gaming ecosystem has grown in the past two years.

Roblox's user numbers looked solid as well. Daily active users (DAUs) grew 29% in Q2 to 43.2 million, with strong support from the Asia Pacific and Rest of World regions, which grew users 57% and 63%, respectively, in the period. Users over the age of 13 grew 46% in Q2 to 21.5 million, showing the progress the company is making to expand outside of its core younger kids demographic.

Even though Roblox is growing quickly and investing heavily, it is actually highly profitable. In the second quarter, free cash flow hit $168 million, marking four consecutive quarters of $100 million or more in free cash flow. Management constantly talks about how much it will be investing into the business, so free cash flow may end up being lumpy in the short term, but these numbers show how profitable the ecosystem can be in the long run.

One of the reasons Roblox is growing so quickly in Asia is its entrance into China through its subsidiary Luobo, which is partnering with Tencent. The concept is the same, with a platform for developers to make games that other users can play, but the company made it a separate entity so it could properly follow China's strict gaming/business policies. It is hard to tell how much progress Roblox has made in the country, but with hundreds of millions of gamers in the region, there is a huge opportunity to go after.

Outside of gaming, Roblox made strong progress with its music and fashion initiatives in the quarter. The company announced a partnership with Bertelsmann Music Group (BMG) to enable more opportunities for artists on Roblox. In May, 4 million people attended pop star Zara Larsson's 3D Launch Party on Roblox, which again shows the versatility of the platform.

Within fashion, Roblox unveiled a virtual "Gucci Garden" with digital fashion items and collectibles. The area got 20 million visits in two weeks. A big part of these virtual worlds is the clothing/skins your virtual characters have, so partnering with a long-standing luxury brand like Gucci could prove incredibly profitable for Roblox.

At a market cap of $48 billion, Roblox trades at a trailing price-to-free-cash-flow (P/FCF) of 81 based on its trailing-12-month financials. This is expensive, but if you think the company can continue growing its top-line bookings at a high rate while also expanding its free cash flow margins over time, this P/FCF could come down fast.

On the latest conference call, Roblox management stated that it has a goal of getting to 1 billion users and 1 billion hours of daily activity on Roblox at some point in the future. That is a long way from its current user and engagement numbers, and it may see a temporary slowdown coming out of pandemic lockdowns, but if it can get there, making it one of the dominant social platforms in the world, Roblox will be much larger than it is today.

Brett Schafer has no position in any of the stocks mentioned. The Motley Fool owns shares of and recommends Roblox Corporation and Tencent Holdings. The Motley Fool has a disclosure policy.