Please ensure Javascript is enabled for purposes of website accessibility
Log In Help Join The Motley Fool
Free Article Join Over 1 Million Premium Members And Get More In-Depth Stock Guidance and Research
By Leo Sun – Aug 21, 2021 at 6:17AM

The "Amazon of South Korea" remains a speculative long-term bet.

Coupang's stock recently dipped below its IPO price after it posted a messy second-quarter report. Concerns about Coupang's lack of profits, its ability to expand beyond South Korea, and tougher post-pandemic comparisons for e-commerce companies exacerbated that sell-off.

But is that near-term noise causing investors to overlook Coupang's core strengths? Let's dig deeper and see if this $55 billion e-commerce company can become a trillion-dollar one within the next ten years. 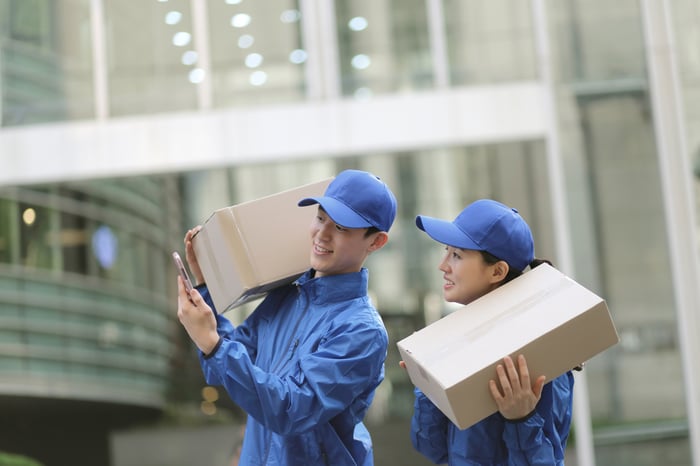 How Coupang can join the twelve-zero club

Coupang's revenue surged 93% to $12.1 billion in 2020, and analysts expect that figure to rise another 60% to $19.3 billion this year. Based on that forecast, Coupang's stock trades at just three times this year's sales -- making it much cheaper than other high-growth e-commerce stocks.

Amazon (AMZN -0.77%), which is growing much slower than all three companies, trades at just three times this year's sales. In other words, Coupang's low price-to-sales (P/S) ratio indicates that investors aren't too optimistic about its ability to maintain its current growth rates.

However, let's assume investors warm up to Coupang again and bump its P/S ratio up to ten. If that happens, Coupang's annual revenue would need to rise at a CAGR of 23.5% between 2020 and 2030 to $100 billion to make it a $1 trillion stock.

Is that a reasonable target?

That CAGR is fairly reasonable relative to other high-growth e-commerce companies. For example, MercadoLibre grew its revenue at a CAGR of 33.8% between 2010 and 2020. Amazon's total revenue (including its cloud business) rose at a CAGR of 27.4% during the same period.

However, we can't assume Coupang will become the next MercadoLibre, Amazon, or Sea, for four reasons. First, Coupang only controlled 24.6% of the South Korean e-commerce market last year, according to Goodwater Capital. The rest of the market was still fragmented among smaller players like G Market (19.7%), 11 Street (15.9%), Auction (10.8%), and Naver Shopping (8.3%).

To truly dominate the South Korean market, as MercadoLibre and Sea's Shopee did in their respective regions, Coupang needs to wipe out its competitors with loss-leading strategies or buy them out to consolidate the market -- both of which will squeeze its margins and result in wider losses.

Second, South Korea only has a population of about 52 million. Its internet penetration rate has surpassed 90%, and its average annual wages are comparable to wages in the U.S. and Japan.

Third, Coupang is trying to squeeze more revenue out of its active customers to offset that potential slowdown. To do so, it's expanding unprofitable services like its grocery delivery platform Rocket Fresh and its restaurant delivery platform Coupang Eats. It's also trying to lock them in with its Prime-like WOW subscription service. However, all of these costly strategies will exacerbate Coupang's losses.

Lastly, Coupang plans to expand overseas, starting with Japan, Taiwan, and Southeast Asia. However, Amazon and Rakuten (RKUNY 2.59%) are already firmly in control in Japan, while Shopee is the market leader in Southeast Asia and Taiwan. Challenging those entrenched leaders could result in ugly price wars and wider losses.

Coupang's founder and CEO Bom Kim has already transformed his company multiple times over the past decade, and it still has a lot of growth potential in its current form. I think Coupang's stock could generate multibagger gains as it stabilizes its business over the next few years, but hitting a trillion-dollar market cap by 2030 might be asking too much -- especially if it saturates its home market and struggles to find fresh ways to expand its ecosystem and geographic reach.

3 Reasons Why Coupang Is a Top Growth Stock
356%