Please ensure Javascript is enabled for purposes of website accessibility
Log In Help Join The Motley Fool
Free Article Join Over 1 Million Premium Members And Get More In-Depth Stock Guidance and Research
By Greg Thomson – Aug 24, 2021 at 9:15AM

People often assume that Bitcoin (BTC 2.62%) is digital cash -- but this is only true on the surface. Bitcoin was invented to serve that purpose, but network congestion and exorbitant transaction fees have stood in its way. Today, Bitcoin has entirely different aims from when it first launched -- and investors who fail to understand that difference might regret it.

Why is Bitcoin useless as a daily currency?

Cryptocurrency fans like to argue that the technology will one day "bank the unbanked." Given that the majority of the world subsists on minuscule wages, any version of global digital cash would have to be cheap to use. But Bitcoin has continually seen its transaction fees climb since its invention because of one key factor built into its design.

The blockchain is literally just that -- a chain of blocks. Each one contains all the transactions that people make on a daily basis. The number of transactions that can be fit into a block at any one time depends upon the block size. 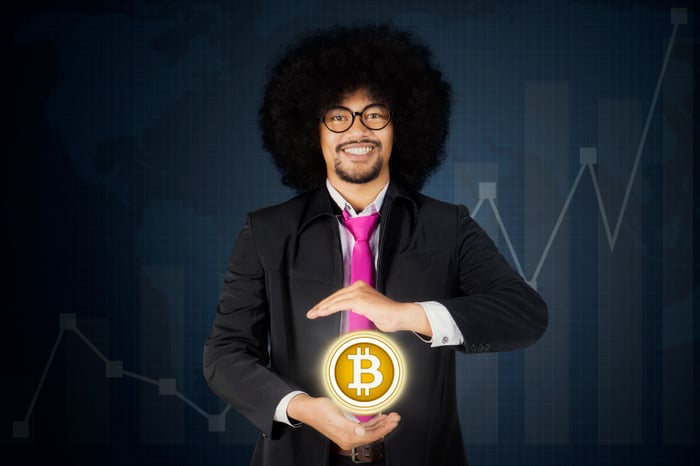 Miners confirm a new block on the chain every 10 minutes, and users have to pay to have their transaction included in the next block. The more they're willing to pay, the farther toward the front of the line miners put their transaction, and the less users wait to see it go through.

For most of its existence, Bitcoin's block size has been limited to 1MB, allowing the blockchain to process roughly five transactions per second at most. This wasn't an issue in 2012, when only a few thousand people were using the technology, and fees were perched at less than a fraction of a cent. But as Bitcoin's popularity grew, so did its problems.

As more people began competing for the same limited transaction space in those 1MB blocks, users had to pay ever-higher fees to see their transactions go through.

Indeed, during the bull run of 2017, Bitcoin's average transaction fee rose to $50, making purchases with the currency prohibitively costly. Online stores that had previously been eager to adopt Bitcoin summarily abandoned it, including the popular gaming platform Steam, which dropped Bitcoin that December.

By April 2021, average transaction costs had increased again -- this time to a new all-time high of $62, as seen below courtesy of data from Bitinfocharts.com.

Today, Bitcoin's average fees have receded back to the $2 range -- a massive 96% reduction. Yet this is still nowhere near affordable enough to make the technology viable as a daily transactional currency.

In short, Bitcoin's popularity and limited block size are pushing it farther away from convenient everyday uses. But other currencies have since moved in to try to pick up its slack.

Bitcoin always had a potential solution to rising transaction costs: Raise the block size and allow more transactions in each 10-minute window. A significant chunk of the Bitcoin community wanted to take this route when fees began to spike in 2013.

But those opposed argued that increasing the size of the blockchain would require people to use up too much hard drive space to store the newly enlarged data -- an argument that looks flimsier in hindsight, since storage prices per gigabyte for consumer hard drives have fallen by roughly 50% since 2013, and the trend looks like it will continue.

In 2017, the disgruntled "big-blockers" decided to split away from Bitcoin. Their new currency shared Bitcoin's blockchain up until that point, when it veered off on its own.The newly named Bitcoin Cash (BCH 0.90%) offered bigger block sizes -- first 8MB, and now 32MB.

Today, Bitcoin Cash fees are less than a fraction of a cent -- but the blockchain suffers from less public exposure than Bitcoin, which means it has attracted fewer users. In fact, despite the current 32MB block size, the most recent data shows that blocks are only being filled with around 500KB worth of transactions -- or 1.5% of their total capacity.

Bitcoin Cash's hashrate -- the total computing power securing and running the blockchain worldwide -- is also only a fraction of Bitcoin's. This means it would require less computing power for any malicious actor to hack Bitcoin Cash.

The future for Bitcoin and Bitcoin Cash

To become a store of value -- essentially, digital gold -- Bitcoin needs to stabilize its price. Bitcoin supporters believe this will happen as the coin is exposed to a broader trading arena, expecting widespread institutional investment to eventually calm Bitcoin's volatility.

Bitcoin Cash, meanwhile, has taken up the mantle of Bitcoin's original aims, but struggles to be seen in the shadow of its better-known forebear.

Bitcoin Cash's recent flurry of activity was spurred, in part, by the launch of various social media sites on its blockchain, where users can post without fear of censorship, and tip each other using BCH. Sites like Read.Cash and Memo.Cash brought more eyes to the Bitcoin Cash blockchain in late 2020 and early 2021. Between February and April alone, the number of unique visitors to the Read.Cash website more than doubled, from 227,000 to 513,000, according to publicly available data.

As Bitcoin moves further toward its aim of becoming digital gold, it naturally leaves space open for a cryptocurrency that can handle high-throughput daily transactions at low cost. In this sense, investors don't have to choose either Bitcoin or Bitcoin Cash -- as long as they understand each blockchain's completely different reason for existing.