Please ensure Javascript is enabled for purposes of website accessibility
Log In Help Join The Motley Fool
Free Article Join Over 1 Million Premium Members And Get More In-Depth Stock Guidance and Research
By Jamie Louko – Aug 31, 2021 at 7:14AM

FIGS is gaining tremendous popularity in the healthcare apparel market -- a large and growing industry.

Medical scrubs manufacturer FIGS's (FIGS 3.36%) high-quality products have allowed the company to amass a large, loyal customer base in medical offices and hospitals. With lots of opportunities ahead to expand its business, its impressive financial status and profitability could allow the company to make massive reinvestments to help fuel future growth.

Before FIGS, scrubs were just products to get healthcare workers through the day. They might have fun, customizable patterns, but they were made out of low-quality materials. FIGS is trying to change this. The company wants its "awesome people" -- which is what the company calls its customers -- to love their scrubs. With a proprietary fabric technology that stretches for comfort while fighting odor, wrinkles, and moisture, and designs with strategically placed pockets and other features tailored to healthcare professionals' daily needs, FIGS is trying to  combine comfort, durability, function, and style. 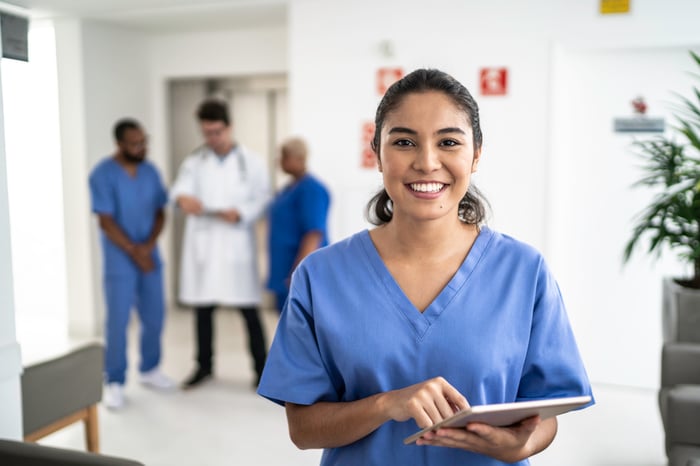 The company's quality products do come at a high price, however: nearly $90 for a full set of scrubs, compared to just $20 for a full set of an off-brand pair.  This could result in price-sensitive consumers avoiding buying FIGS products. But thus far, customers seem willing to pay up, resulting in strong growth in revenue, active customers, and profits. As the company's brand power increases, it could fuel sustained growth from a growing base of loyal customers.

What brand power can do

FIGS has grown into the largest direct-to-consumer healthcare apparel company with over 1.6 million active customers -- a number that grew 79% in the most recent quarter . Yet this growth could be just the beginning. The healthcare sector is one of the largest in the U.S., with over 20 million professionals -- a number expected to grow 15% (versus just 4% for all other occupations) between 2019 and 2029.

With active customers surging, it shouldn't surprise investors that FIGS grew its net revenue by 57% to $101 million in the second quarter. FIGS has also been able to better monetize these active customers, increasing its average order value by 17% year over year to $103 in the same period.

The company had a quarterly gross margin of 73% -- which increased from roughly 70% year over year -- and an adjusted EBITDA margin of 26.5%. The strong margins partly explain why FIGS had an adjusted net income -- which does not account for $50 million of stock-based compensation paid out in relation to the IPO -- of $14 million in the second quarter.  In fact, FIGS' 2020 fiscal year was profitable, with $263 million in revenue and $57 million in net income.

A 73% gross margin is relatively unheard of for clothing manufacturers. Even top apparel manufacturers like Nike (NKE -0.94%) have a gross margin around 45%. FIGS has been so successful in branding its scrubs as a symbol of trendiness and identity that consumers are willing to pay a pretty penny in order to wear them.

Where FIGS can go from here

FIGS sold over $100 million in scrubs just this quarter -- yet the company has barely penetrated its market. Management estimates that it only has 3% of the total U.S. market share, which leaves lots of room to grow domestically.

The company also has its eyes set on international growth. The global market opportunity for FIGS is expected to grow from $67 billion in 2020 to $86 billion in 2025.

FIGS wants to make more than scrubs. It's moving into "lifestyle product" manufacturing, which focuses on products for customers' off-hours, including shoes, leggings, and socks. It is also looking at building into other types of healthcare apparel like underscrubs.

Currently, it is expecting $395 million in 2021 revenue. This represents just 0.5% of the company's estimated $79 billion market opportunity.

What is leaving investors uncomfortable?

FIGS has low barriers to entry: A competitor would not have to spend lots of capital to manufacture high-quality scrubs and effectively compete. The company already faces a lot of competition from smaller manufacturers such as Scrubs & Beyond and Jaanuu. FIGS has set itself apart with extremely skillful branding -- but that can be a weakness as well. The company recently endured backlash after an insensitive ad mocking women in medicine, which hurt its brand reputation. Further blunders could damage its brand beyond repair.

FIGS has a popular, high-quality product with strong pricing power and tremendous secular tailwinds to push it forward -- a gold-standard combination for any apparel business. It's also built a loyal customer base that seems poised for continued growth. Investors should watch its revenue, profit, and market share growth; if it can keep these figures rising, FIGS could enjoy considerable success over the next five years.

Will This Growth Stock's Risky Move Pay Off for Investors?