Investors looking for yield can find it in real estate investment trusts that specialize in senior medical care.

In the short term, all three companies have taken a hit because of the coronavirus. The number of nursing home deaths due to COVID-19, particularly at the beginning of the pandemic, has hurt occupancy levels and eroded investor confidence. Shares of all three businesses are down since the beginning of the year.

However, there are reasons I see this space as a good opportunity, particularly in the long term; the need for assisted living and senior housing is only expected to increase as baby boomers age. In the meantime, these companies' reduced share prices mean that their already generous dividends are yielding above 6%. 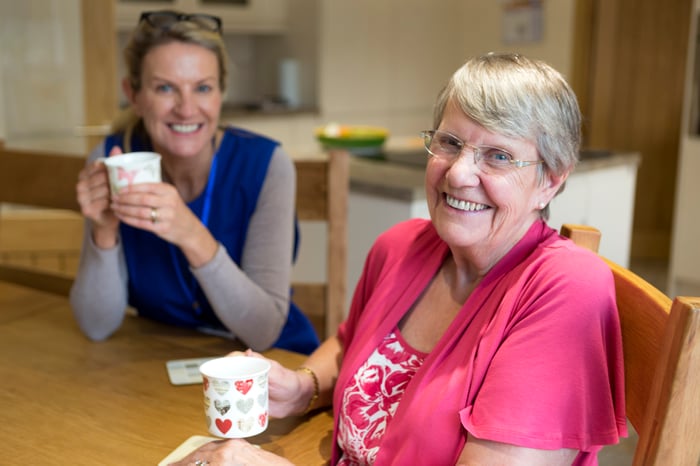 Omega Healthcare Investors leases its 948 properties to 70 skilled nursing facilities and assisted living facilities in 42 states and the U.K. The stock is down more than 7% this year while the S&P 500 index is up more than 20%.

The company offers a quarterly dividend of $0.67 per share, and its most recent dividend raise marked 17 consecutive years of upping the payout. Its current yield of 7.92% is much higher than the S&P 500's average of about 1.3%.

Omega's clients are still hurting a bit from the pandemic, which has meant lower numbers of people willing to enter their facilities as well as labor shortages. As of March 31, occupancy levels were 75.3%, down from 83.6% in the same period in 2020. The company said in its second-quarter report that occupancy has ticked up a bit, to 75.7% in July, but that's still less than ideal.

Only one client, however, representing 3% of the company's business, asked for rent relief in the second quarter. In July, the most recent period it reported, Omega collected 98.7% of rents, and that percentage has stayed pretty steady over recent quarters.

The company's financial health appears solid. It reported adjusted funds from operations (AFFO), a better metric for REITs than revenue, through six months of $410.5 million, up from $376 million. In its second-quarter earnings call, it said its dividend AFFO payout ratio is 79%, well within the company's means considering its cash flow. Net income through six months was reported as $251.2 million, up from $194.2 million in the same period in 2020.

LTC Properties invests in senior housing and nursing homes, with a breakdown of 50% in each. It owns 177 properties across 27 states, leasing them to 30 clients. The company's shares are down more than 11% this year.

LTC pays out a monthly dividend of $0.19 per share, which puts its yield at 6.59% as of Friday's market close. The company hasn't raised its dividend since 2016. However, in that same period, it has never lowered or skipped on a dividend payment. It began disbursing dividends in 1992 and switched to a monthly dividend in 2005.

Like Omega, business has been down for LTC because occupancy rates for its properties are still below ideal; averages are 74% for private-pay facilities and 69% for skilled nursing locations, though both numbers represent a rise over the previous quarter. Through six months, net funds from operations, excluding non-recurring items, were reported as $47.2 million, down from $59 million year over year. Net income through six months was reported as $31.7 million, compared with $65.2 million year over year.

Two of LTC's tenants, Senior Lifestyles and Abri Health Services, have had financial difficulties, but LTC has been able to sell or find new tenants for properties leased by those companies. Excluding those two, rent collection was at 93.6%, the company said in its second-quarter earnings call. LTC also paid off $41 million of debt in the quarter.

Operating senior housing and nursing homes has become more expensive because of rising labor costs and more expensive COVID-prevention protocols, including the costs of personal protective equipment. However, it is still a lucrative operation, particularly with the rising senior population; if one company that's leasing from LTC struggles, it doesn't seem to have trouble finding another.

The company said in its second-quarter earnings call that it intends to make sure the dividend payout is no more than 80% of funds available for disbursement. While LTC said it had a 98% dividend payout ratio in the second quarter, it expects that to fall once issues are settled with Senior Lifestyles and Abri Health Services.

Sabra operates 423 properties in the U.S. and Canada, two-thirds of which are skilled nursing and transitional care; the bulk of the rest are senior housing facilities. Its shares are down more than 5% for the year. The company pays a quarterly dividend of $0.30, leaving it with a yield of 7.32% and a safe ratio of 75% of normalized AFFO.

The company trimmed its dividend in March 2020 from $0.45 to $0.30, citing the uncertain economic climate because of the pandemic.

Occupancy numbers for Sabra's clients are stronger than for the other two REITs discussed here. As of the second quarter, the company said occupancy rates averaged 78.4%, up from 75.1% in the prior quarter. Its collection rate from the beginning of the pandemic through July 31 was 99.8% of forecasted rents, the company said. 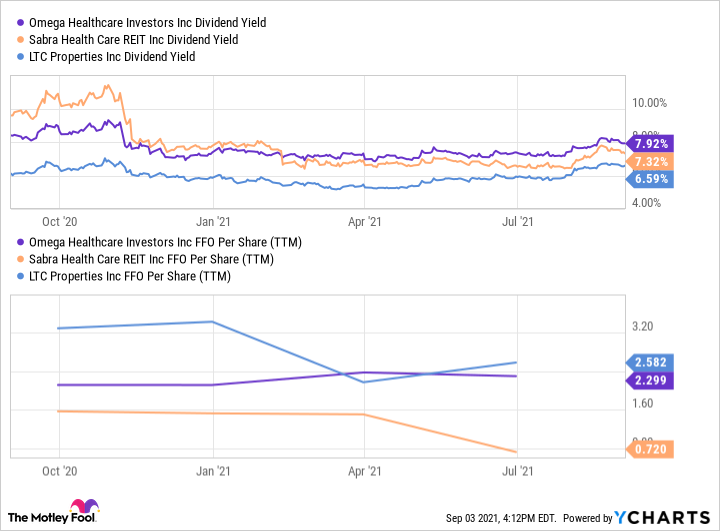 Investing in REITs that specialize in skilled nursing and senior housing facilities is an obvious risk while the coronavirus pandemic continues to drag on. However, investors' concerns about the sector have also driven down the prices of these stocks, presenting an opportunity to get yield on the cheap. Meanwhile, long-term trends still point toward likely growth in the sector.

Of the three, Omega Healthcare offers the highest dividend, along with a safe dividend-to-AFFO payout ratio. Its size gives it strength to survive the stresses that have come with the pandemic, and it is the only one of the three whose AFFO is up compared with 2020.

I also see Sabra Health Care as a solid choice. The company pays a good yield, and given its relatively low dividend-to-AFFO payout ratio, there is the possibility for it to easily jump if the company raises its dividend to its pre-pandemic levels. Management likely won't do that, however, until it returns to positive net income. In the meantime, it has solid occupancy levels and rent collection, so its cash flow remains solid.