Executives talked about the company's five-year strategy at its recent investor day. Here's what you may have missed.

Earlier this month, Autodesk (ADSK 2.17%) had a three-hour investor day event at which its executives gave an overview of the company's long-term strategy. Apparently, some investors didn't like what they heard -- Autodesk stock sold off during the trading days that followed. Combined with its post-earnings drop in August, the stock price is now down by about 20% from the all-time high it hit less than a month ago.

Should investors be worried about Autodesk's future? 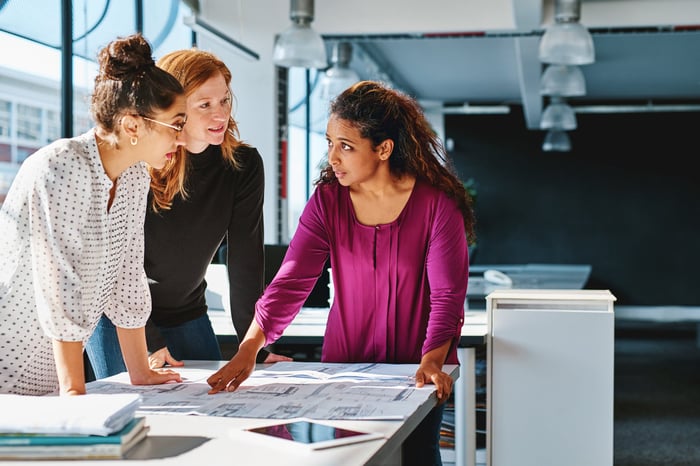 There were tons of operational updates at the investor day (which you can rewatch on the company's website), but what investors seemed to care about the most was Chief Financial Officer Debbie Clifford's update regarding long-term revenue and free cash flow targets. She reiterated that for its fiscal 2023 (which begins Feb. 1, 2022) Autodesk is targeting $2.4 billion in free cash flow. However, in fiscal 2024, Autodesk expects its free cash flow to dip slightly before returning to growth and compounding at a double-digit percentage rate through fiscal 2026.

This FCF wobble is happening because Autodesk decided to revise its billing strategy for its large enterprise clients. Previously, companies would pay the software company upfront for three-year subscriptions and get 10% discounts on products. Now, it is changing that: It will keep the long-term bulk deals, but bill clients annually and give them smaller discounts. This is good for customers as it helps them manage cash flow, but it means that Autodesk will be delaying some revenue that it would have collected in fiscal 2024 to the years thereafter.

Clifford stated that Autodesk's goal is to grow revenue at a double-digit percentage rate through fiscal 2026 while maintaining operating margins in the 38% to 40% range. It is unclear what some investors were expecting instead, but these updates are likely what caused the stock's post-investor day decline.

There's a lot going on under the hood

Moving to operational updates, Autodesk revealed some interesting information on the progress it is making with its manufacturing and construction solutions. Fusion 360, a cloud-based platform for mechanical, electrical, and manufacturing engineers, now has 165,000 paying subscribers after having grown at a 53% compound annual rate over the last three years. Even more impressive, billings on Fusion 360 have grown at a compound annual rate of 107% over that period, showing how Autodesk is landing and expanding subscribers with its extensions strategy.

Executives also gave insights into Autodesk Build, the company's new flagship product for construction management. The product was launched in February, and as of July was already being used on 11,000 projects around the world. Investors shouldn't expect the recently debuted product to contribute much to revenue for the next few years. But it sets up Autodesk to succeed in one of the largest industries in the world over the next decade and beyond.

Lastly, Autodesk gave some interesting updates on its application programming interface (API) service, Autodesk Forge. This product allows customers to use Autodesk software in customizable ways, building on top of its existing platforms. Paid API usage was up 396% year over year at the time of the presentation, and there have been over 209 billion API calls on Forge within the last 12 months, up 71% year over year. Right now, Autodesk is under-monetizing its API service as it tries to onboard as many developers as possible. As Forge scales, it too will become more meaningful to Autodesk's growth.

Why there's no need to worry

Seeing a stock price drop 20% within a month is alarming for any shareholder. But Autodesk investors have no need to worry about the business if they keep a long-term view. Double-digit percentage rate growth with 40% operating margins is something not many businesses can achieve and shows the tremendous profitability of the company's software products.

Yes, the stock trades at a price-to-sales ratio of 15.5. However, Autodesk's business is almost entirely subscriptions, making its revenue highly reliable, and it had $4.14 billion in remaining performance obligations as of the end of Q2. Plus, the potential impact of the massive federal infrastructure bill currently being hammered out in Congress is not reflected in the company's long-term guidance. If (or when) over $1 trillion in infrastructure spending gets doled out over the next decade, that could help boost Autodesk's revenue growth substantially.

Autodesk's business looks to be humming along at the moment. If you're a shareholder, the best thing to do is probably just hold onto the stock for the long term. If you are considering the stock, it's currently available at a discount.

My Best Wildly Undervalued Stock for 2023

Autodesk Just Showed Why It Belongs in Every Investor's Portfolio
349%