Something tells me Jerome Powell is not going to like this one.

Most Americans have little faith in the Fed. Heck, even the 28th president, Woodrow Wilson, who signed the Federal Reserve Act into law in 1913, later regretted the decision. Wilson claimed he had ruined the country by letting a "great industrial nation [be] controlled by a system of credit" when referring to the act.

So curious investors probably have two pressing questions in mind: 1. Does this blockchain allow me to elect my very own decentralized Fed chairman? And 2. Does this blockchain prevent arbitrary issuance of currency, such as when the Fed printed 40% of all U.S. dollars in circulation over the last year? The answer to both questions is, sort of. Let's look at why Reserve Rights is a solid investment that can make coin holders happy, albeit at the expense of sounding the alarm on Jerome Powell's computer screen. It's already up a stunning 1,290% since its inception two years ago. 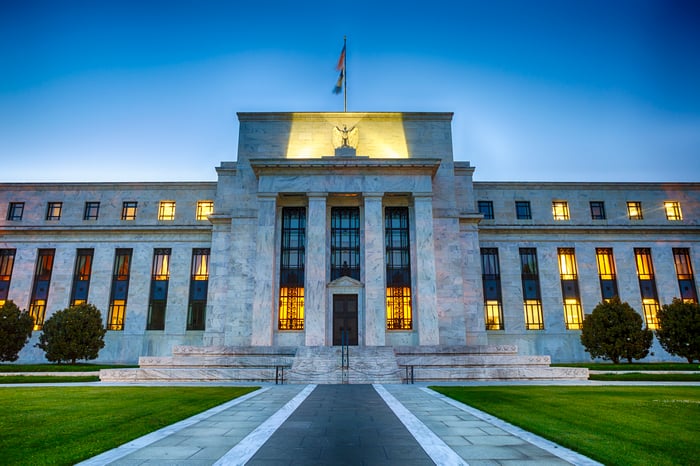 What is this outrageous token?

Created in 2019, Reserve Rights is a protocol for buying, holding, and spending digital U.S. dollars. Its main goal is to provide a stable platform for transactions in countries at risk of hyperinflation. There are two tokens on the network, the Reserve Stablecoin (RSV), which has a target exchange rate of 1:1 with the USD and is used for everyday transactions. Then there's the Reserve Rights Token (RSR), which is used to maintain that target and is more of an investment.

This setup works as follows: During times of excessive demand for RSV, the exchange rate will likely fluctuate above that of fiat USD. Coin holders can then buy-swap their RSR for RSV at $1 each via smart contract and then sell their RSV at market value -- earning a profit while driving the price down to par. Similarly, when there is a lack of demand for RSV, the exchange rate will likely fall below fiat USD. Coin holders can then buy RSV at a discounted value and then sell-swap them for RSR via smart contract at a 1:1 RSV-to-USD exchange rate, driving the price up to par. The whole ordeal is governed by smart contracts, and like other cryptos, can be performed on a digital wallet, but the functionality of linking RSR with RSV is still a work in progress.

The network's RSV stablecoins are fully backed by a basket of other stablecoins and cryptocurrencies, such as the USD Coin via smart contracts. One percent of all consumer transactions via RSV goes toward funding the digital vault that provides such backing, along with any applicable capital gains inside the vault. Moreover, users themselves can directly have a say in its governance by vetoing protocol proposals with their RSR tokens. So developers cannot just mint new coins en mass and cash out at the expense of hyperinflating everyone else.

Is anyone actually using it?

Developers behind the Reserve protocol claim that at least 4,000 businesses are using the application, which has received over 100,000 downloads on Alphabet's Google Play. That's pretty amazing, considering that only about 3,000 businesses worldwide use or accept Litecoin, the world's 16th largest cryptocurrency, as payment. And one can take RSR's developers for their word -- the Reserve protocol is currently backed by billionaire investor Peter Thiel, Coinbase Ventures, and president of Y Combinator Sam Altman. But keep in mind that the app only uses the stablecoin RSV, and that RSR features are still in development.

There needs to be a word in the English language to describe something that's beyond your wildest imagination but not surprising at all when you discover what it is. That's right -- the U.S. isn't the country that's adopting Reserve Rights the fastest, but instead, it's Venezuela. Back in May, famous American adventurer and YouTuber Drew Binsky tried to exchange $100 to Venezuelan bolívares on the streets of Caracas; he could not do so despite getting boxes after boxes of worthless bills. On Oct. 1, the Venezuelan government will slash six zeroes off its currency to combat astronomical rates of inflation.

So most Venezuelans settle their transactions in USD. With the Reserve app, users can deposit their bolívares and receive USD in an instant. This allows individuals to purchase goods and services instantly with electronic payments, instead of carrying bundles of bolivares to the market to, say, buy a fish. In addition, this allows users to convert their hard-earned cash into a stable currency like the USD immediately after getting their paychecks to mitigate the risk of further inflation. It was the fourth most download finance app in the country on July 8.

Overall, given its unique (but developing) dual-token setup, institutional backing, democratized governance, and real-world applications, Reserve Rights is a solid cryptocurrency for investors to check out. What's more, Secretary of the Treasury Janet Yellen is herself a fan of stablecoins, and has called for more interagency work for greater adoption of the technology. So lastly, even though Powell may be furious at this "knock-off" of the empire he controls, one can get the assurance that the real Fed won't be cracking down on Reserve Rights anytime soon.