As you can see from the chart below, the stock traded even for much of the month before surging higher on its earnings report. 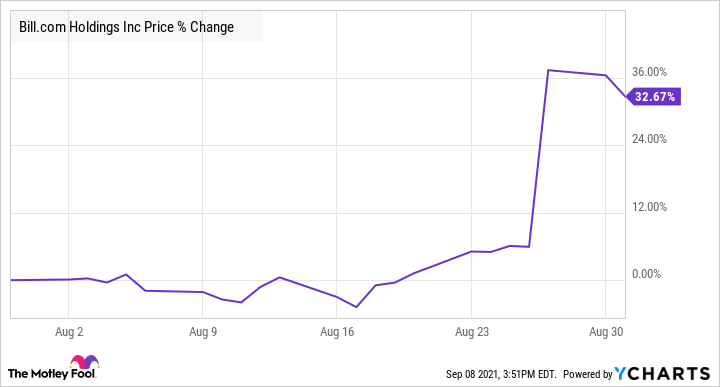 Bill.com shares jumped 30% on Aug. 27 after the fintech company delivered a stellar earnings report as its Q4 revenue and top-line guidance for fiscal 2022 were well ahead of expectations.

The business-to-business payments specialist said core revenue growth, which excludes interest collected on funds held for customers, doubled to $77.5 million, and overall revenue jumped 86% to $78.3 million, which easily beat estimates at $62.1 million. That result also included $10.3 million in revenue from DivvyPay, the business expense management company it acquired at the beginning of June. Revenue from transaction fees tripled in the quarter, showing that customers are using Bill.com to automate more of their financial transactions. Total customers, meanwhile, increased 24% year over year to 121,000.

On the bottom line, the company posted an adjusted loss per share of $0.07, worse than break-even in the quarter a year ago, and also missing estimates at a loss of $0.04. Management said that without the Divvy acquisition, it would have finished the quarter with a loss of $0.03.

CEO René Lacerte said, "We are building the one-stop shop platform for SMBs to manage all their financial operations and B2B spend."

Management's guidance for the new fiscal year also had investors cheering as the company expects revenue growth of 100% to 102%, or $476 million to $480 million, which includes the impact of the Divvy acquisition. That dwarfed the analyst consensus at $308.3 million.

The stock has continued to climb higher in September, up 7% through Sept. 16, bucking the broader trend in tech stocks as it bounced in tandem with strong earnings reports from some its cloud peers in the first week of September and as BTIG raised its price target on the stock from $290 to $310. The research firm noted that the closing of Bill.com's $625 million acquisition of Invoice2Go will multiply its opportunities for cross-selling and growth. Bill.com stock pulled back briefly the following week after certain existing shareholders filed to sell 1.8 million shares, equivalent to about $550 million or roughly 2% of the company's market cap. However, the stock quickly rebounded after falling 4% on Sept. 10.

After last month's pop and the gains in September, Bill.com shares are now trading at a sky-high price-to-sales multiple of more than 50 based on this year's guidance. Given that valuation, the stock's growth is likely to slow down, but a fast-growing company in a huge market deserves a high price tag.

Why Bill.com Holdings Sank as Much as 26.6% This Week