This contractor giant packs a triple-threat punch that makes it worth considering for your portfolio.

The United States spent $725 billion on national defense in 2020; the U.S. government is big business. While investors can't buy "shares" of the U.S. government, there are ways to gain exposure to the massive dollars the U.S. spends year in and year out.

Aerospace and defense company Lockheed Martin (LMT -1.34%) sells billions of dollars of products and services to the U.S. government each year, which accounts for 75% of the company's revenue. Here is why long-term investors should consider adding Lockheed Martin to their stock arsenal.

Deep ties with the U.S. government 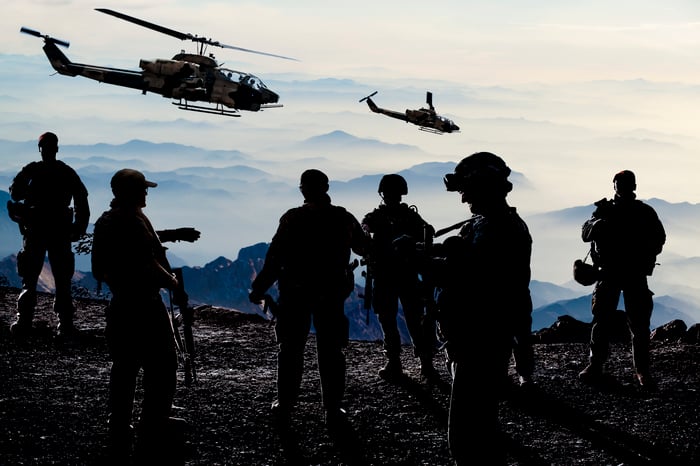 The United States government is a great customer to have. It spends hundreds of billions of dollars each year and there is virtually zero chance of not paying its bill. The U.S. spends more on its military than the following 11 countries put together: China, India, Russia, the United Kingdom, Saudi Arabia, Germany, France, Japan, South Korea, Italy, and Australia. America is always protecting its interests across the globe, and the reality of constant geopolitical tension requires that the U.S. constantly upgrades, updates, and expands its military infrastructure.

High-tech weapons systems and jets are products built with extremely sensitive information, so Lockheed Martin enjoys an oligopoly supplying its products, meaning that it's one of the very few companies that sells these types of goods to the government. Outside of other established defense companies like General Dynamics, Northrop Grumman, and Raytheon, the threat of outside competition is low.

Lockheed Martin generates sales from contracts, often multi-year projects, so the company has good visibility of its business trends. Its backlog is currently worth $141 billion as of 2021's second quarter, though that is down from Dec. 31 when it was $147 billion. The important thing is that the backlog grows over the long term, and it's still higher than in 2018, when it was at $130 billion. Investors should continuously monitor the backlog to make sure it trends higher over the long term.

A steadily increasing backlog leads to steady revenue growth; Lockheed Martin has grown its revenue about 7% per year over the past five years, and it's guiding for $68 billion in sales for the entire 2021 year. Management spends aggressively to buy back shares of its stock, which helps grow earnings per share (EPS) faster. Over the past five years, the company's EPS has grown 16% per year. At the same time, its number of outstanding shares has fallen from 303 million to 279 million.

In addition to buybacks, management has developed a strong track record of paying dividends to its shareholders. Lockheed Martin pays a quarterly dividend that totals $10.40 per year with a dividend yield of 3.05%.

Lockheed Martin has raised its dividend 19 years running and has grown that payout 13.4% per year for the past decade. In other words, investors get a stock with both share price growth and a generous dividend -- the best of both worlds.

On the front edge of space

The world is constantly changing, and so is the way that countries defend themselves. We are bound to see growth in space industries over the years to come. Lockheed Martin's space segment, which includes satellites and spacecraft, already contributes 18% of the company's revenue.

In late 2019, former President Trump created the Space Force, and current President Biden has indicated he has no intention to disband it. While it may sound silly to some, space is rapidly becoming more realistic.

Space tourism companies such as Virgin Galactic are completing test flights, so we could very well see space become the next geopolitical battleground over the years and decades to come. Regardless, Lockheed Martin is poised to be deeply involved in these developments.

The stock is attractively priced

Lockheed Martin is a large company with a market cap of $94 billion, and larger stocks tend to be a bit more stable. Shares have hovered between $320 and $400 over the past year. With management guiding for full-year EPS of $27 per share, the stock currently trades at a price-to-earnings (P/E) ratio of 12.6.

Considering Lockheed Martin's strong ties to the government and its steady EPS growth, the stock trading far below the S&P 500, which trades at a forward P/E of 22, appears to be an excellent value for investors.

Strong defense for your portfolio

It pays well to do business with the U.S. government, and Lockheed Martin is among the government's most significant business partners. Investors are getting a steadily growing company that pays you to hold stock in it.

The stock is attractively valued, which can be a rarity in a market that remains near all-time highs. Lockheed Martin's all-around fundamentals seal the deal, making it my top defense stock to look into.