Buy these stocks to jump-start your retirement goals.

If you could double your money every five years for 30 years, you would compound your original investment by a multiple of 64. That's the magic of compound interest. One of the safest ways to achieve those returns is to stick with strong brands that have plenty of growth opportunities. 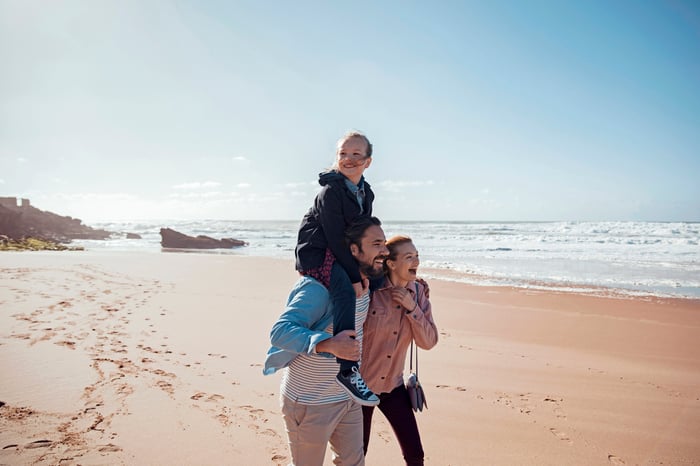 This gym operator can double its store base

John Ballard (Planet Fitness): Staying healthy, both mentally and physically, is something many people have taken more seriously during the pandemic. That's why Planet Fitness, one of the leading fitness centers in the U.S., retained more than 13 million members during the depths of the pandemic when most of the company's gyms were temporarily closed. It ended July with more than 15 million members, marking six straight months of net member growth, and there's more to come.

Over the last five years, the stock has nearly quadrupled in value, as Planet Fitness nearly doubled its store count to 2,170. The chain has distinguished itself with its "Judgement Free Zone" environment, which encourages all people, no matter where they are in their fitness journey, to not be shy about visiting a gym.

Its past performance shows the concept working. Before the pandemic, Planet Fitness achieved 53 consecutive quarters of positive same-store sales growth going into the first quarter of 2020, and it's set to pick up where it left off now that 98% of its locations are open.

One of the main characteristics to like about the business is the high recurring revenue stream, where approximately 90% of store revenue is derived from royalties, vendor commissions, and membership fees. Plus, franchisees are required to purchase new fitness equipment from Planet Fitness every five to seven years.

Management is targeting 4,000 stores in the U.S. alone, which is nearly double the current store count. More store openings, membership growth, and increasing revenue per customer -- as more members upgrade to a Black Card membership that offers additional perks -- should keep the value of the business growing for investors to potentially earn a double from this growth stock over the next five years.

The king of online retail is only getting stronger

Jennifer Saibil (Amazon): If you bought shares of Amazon when it was just starting out, you're already sitting on a nice pile of cash. But if you didn't, don't fret; Amazon's story is far from over, and there's no better time to buy shares than now.

2020 was a milestone year for the internet giant, as it dealt with unprecedented demand as people stayed home. That demonstrated just how important Amazon has become to the American economy, and it's becoming even more entrenched.

But we're past that, and things are starting to slow down. In the 2021 second quarter, growth decelerated to 27%, and the company is guiding for a 10% to 16% increase in the third quarter. While that at first glance looks disappointing, it's important to remember that that's on top of last year's tremendous growth -- 37% in the third quarter. After it laps the 2020 results, we could be in for some more serious growth in 2022. And there are many reasons to be confident about Amazon's continued success.

While there's been some slowdown in digital growth as people return to stores, the shift is permanent, and Amazon will keep benefiting. It's also made a strong effort to enter physical retail as omnichannel becomes the new way to build customer loyalty and people want more options. It's investing in streaming through its purchase of MGM studios, and it has started to sell its just-walk-out technology to client companies. And of course there's cloud computing business Amazon Web Services, which keeps adding new clients and contributes about half of total profits.

Lastly, let's not forget that Amazon is the ultimate disruptor, and it has the cash to get into any business it wants. It doesn't always end up the leader, such as with its efforts to compete against creative marketplace Etsy and its streaming devices that are up against competitor Roku. But it has gained a foothold in both of those areas and is a leading contender in many other areas where it concentrates it investments, such as grocery and streaming content.

The streaming content pioneer that has plenty of room to expand

Parkev Tatevosian (Netflix): Streaming content pioneer Netflix is one stock that can double your money in five years. After all, over the previous five years, Netflix stock has returned 499% for shareholders. Of course, past performance is not guaranteed to replicate itself in the future, but it indicates what might be possible.

The company had thrived since the onset of the pandemic when people were staying home more often and the demand for in-home entertainment surged. Netflix boasts 209 million paying subscribers. The large base of members who value the company's content helped it earn $7.3 billion in revenue in its most recent quarter ended June 30.

Annualized, Netflix is on pace to earn over $29 billion in revenue. That's a large base from which it can increase content budgets, add to the total movies and shows, and improve the quality of productions. All told, Netflix's business will be challenging to compete with at this large scale.

As it builds out its treasure trove of content assets, Netflix is an even more attractive option versus traditional cable TV. According to Nielsen, streaming still represents just 27% of viewing time compared to 63% for linear TV. However, the trend is moving in the direction of streaming. Compared to linear TV, streaming is more convenient, often costs less, and is more portable. For instance, you can use your Netflix subscription on your TV, smartphone, tablet, and laptop, whereas in most cases, you can only watch linear TV on your, well, TV.

If you're looking for a company that can double your money in five years, be sure to place Netflix on your list. The company is making excellent progress in its bid to be one of the most dominant media companies in the world.