The drop was predictable. Factory shutdowns in Vietnam and Indonesia due to COVID protocols forced the company to slash guidance for the year, and it also warned that shipping times to North America had doubled from 40 days to 80 days due to container shortages, port delays, and labor shortages.

The company pulled back its full-year revenue guidance form low-double-digit growth to just mid-single-digit growth, and said that revenue for the current quarter would be flat to down low-single digits as it faces the impact from the factory shutdowns.

However, for long-term investors, the sell-off looks like a buying opportunity. There are two major reasons why. 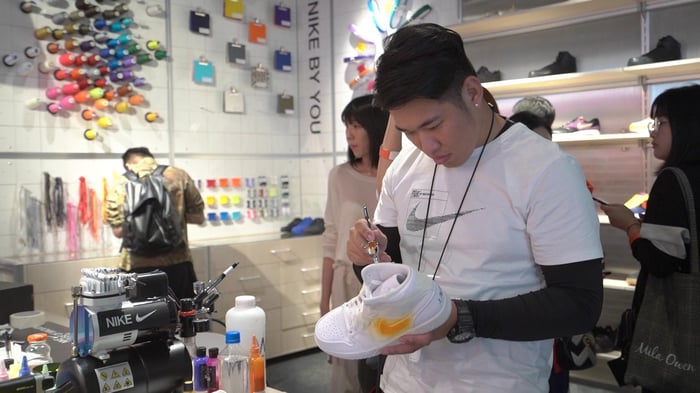 The supply chain issues are temporary

Analysts largely responded to the earnings report by lowering their price targets on the stock. That makes sense. After all, their models are based on Nike's future financial results, and the company itself said that revenue, and therefore profits, would be lower than expected.

However, over the long term the supply chain headwinds will almost certainly be irrelevant. They currently loom large in the financial media, but they are likely to be forgotten within the next year. The COVID-19 pandemic will slow down significantly. Shipping delays will ease, and shortages around labor and container ships should get corrected as well. Nike said that it expects supply challenges to improve around the end of the fiscal year.

It's also worth remembering that Nike is not alone in experiencing this setback. It's affecting much of the global apparel and footwear industry, including peers like Lululemon Athletica and Adidas, which have made similar comments. In other words, the supply chain disruptions aren't putting Nike at a disadvantage -- they're impacting its peers just as much. In fact, Nike believes it's at an advantage against its competitors, and that its leadership position has strengthened during the pandemic as its digital and direct businesses gain momentum. Management also hasn't adjusted any of its spending plans for the year, and is still planning a significant uptick in marketing spending, while its other multi-year investment plans remain on track.

Demand is as strong as ever

Inventory shortfalls may be hitting Nike at the worst time -- just as the holiday season is approaching -- but the company is executing as well as it ever has on the demand side. Revenue rose 16% in the quarter or 12% in constant currency terms, and demand was especially strong in its direct and digital channels, where sales were up 28% and 29%, respectively. Digital sales jumped even as sales in physical stores recovered from the pandemic.

Management said that more than 65% of sales came at full price, exceeding the company's own target. As supply constraints remain, the company expects markdowns to be lower than normal for the rest of the year, and the company is even planning on raising prices in the low-single digits in the second half of the year to account for some of the increased costs in the supply chain. If there was a weak spot in the report, it was that wholesale revenue was up only 5% -- but that is partially by design. The company is shifting resources away from wholesale and to its direct-to-customer channel, and has dropped accounts with a number of "undifferentiated" retailers. The direct-to-consumer channel tends to offer higher gross margins and gives the company more control over the sales process.

Several times during the earnings call, management said that demand was "incredibly high," and that some demand went unfulfilled because of inventory woes.

Aside from the temporary supply chain issues, Nike's business is thriving. The sportswear giant is executing on its long-term strategy of building out its direct and digital channels, and is on track to hit its goal of generating 40% of its revenue from owned digital sales by 2025. Its growing membership base is also supporting that growth.

Friday's sell-off wiped $15 billion from Nike's market cap, a lot for a temporary headwind. Long-term investors may want to take advantage of the discount and scoop up shares of a top-notch company operating at peak performance.