Peloton could be hoping to get Lululemon to rethink its investments in the home-exercise category.

In early September, Peloton Interactive (PTON 1.98%) announced the launch of its private-label apparel brand, Peloton Apparel. The exercise equipment maker's expansion into the clothing sphere raised some eyebrows. The company first began selling apparel in 2014 due to demand from its customers. What's new is that the majority of the collection will now feature items from Peloton's private label.

Why now? The move could partly be in response to sports apparel company Lululemon's (LULU 0.43%) encroachment into Peloton's arena with its acquisition of in-home exercise company Mirror. Peloton could be sending a signal to Lululemon, intending to get the apparel maker to perhaps slow its growth plans for Mirror. Let's take a closer look at this potential, new rivalry. 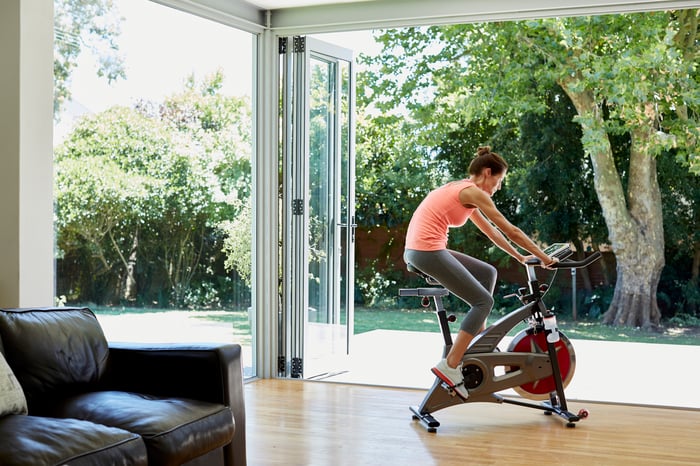 Peloton is playing the long game

Admittedly, Peloton's apparel brand has little chance of overtaking Lululemon's. The latter boasted revenue of $1.5 billion in its most recent quarter with over 90% from apparel sales. More importantly, Lululemon earned $299 million of operating income from the segment in that period. By contrast, Peloton's total revenue in its most recent quarter was $937 million, and the company is not yet profitable in terms of operating income.

On the other hand, if Lululemon accelerates its efforts in the home-exercise category by increasing marketing and adding capacity, then Peloton can strike back by doing the same with its apparel brand. In other words, Peloton is signaling its ability to move into Lululemon's territory as well.

Peloton's management voiced optimism about its apparel launch at an investor conference on Sept. 22:

We're going to be able to sell them apparel, which is now much higher margin than it was yesterday because of our direct to contract manufacturers in Asia and...Los Angeles, where we're getting a lot of this stuff made. But the margins, not only is it better, higher quality, better fabrics, better fashion, better fit and all the stuff that our apparel line represents, but now it's much higher margin .... So we really feel that we are playing the long game. We believe that this could be a winner take all.

Lululemon's apparel business has grown revenue at a compounded annual rate of 20% over the past decade and averaged pre-tax income of 21.5%. It's not like its core business is stagnating and the company needs another avenue for growth. So it's possible that if it faces increasing competitive pressure, it may back off rather than enter into a heated battle.

On the other hand, Lululemon's business is in a stronger competitive position vis-a-vis Peloton. Its consistent profits from the apparel segment give it the capacity to endure pressure. So it remains to be seen how Peloton's move into Lululemon's territory will play out amidst this growing rivalry. This uncertainty makes for an exciting dynamic for investors to follow.