The online dating conglomerate has a lot going on in its favor.

If you asked a decade ago, few people would have expected online dating to have grown to where it is today. And yet, here we are in 2021 with Match Group (MTCH -2.58%) trading at a market cap of $43 billion, one of the largest companies in the United States. Online dating, especially through mobile applications, has grown like wildfire over the past five to 10 years and has made long-term shareholders of Match Group very wealthy in the process. 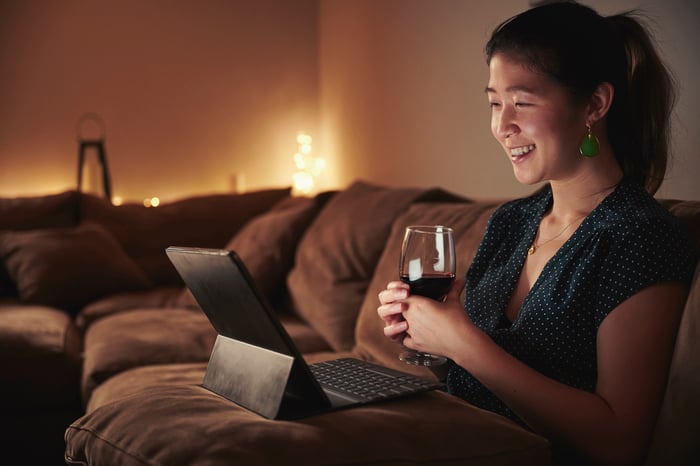 Online dating has seen tremendous growth within the last decade, but the party looks to be just getting started. In the U.S., online dating's most mature market, it is estimated that online dating only has 15% of the market, or 49 million people in the country using one or more services. Worldwide, it is estimated to be even lower, with Mexico at under 5% penetration and India at less than 3% penetration. This low penetration around the globe is what leads market researchers to expect the industry as a whole to grow at a compound annual growth rate (CAGR) of 8.4% between 2021 and 2025.

Online will likely never be 100% of the dating market, but it is a reasonable bet it will have much higher penetration around the globe in 2030 than it does today. From a different perspective, Match Group CFO Gary Swidler said at a recent investment conference that as much as 50% of its target demographic still resists the use of dating apps, which they will look to chip away at over the next decade.

Since its launch less than a decade ago, Tinder has dominated online dating with its well-known app. Tinder is consistently among the top 10 grossing apps on the App Store and has been able to fend off competition because of its strong network effect. A network effect is a competitive advantage that occurs for a business as each additional user increases the value of the service for everyone else. In Tinder's case, the more people that join the app in an area, the better the service works for users. This has prevented apps of similar nature from taking its throne.

In the second quarter, Tinder's direct revenue grew 26% year over year to $399 million, while Payers (Match Group's definition for people paying for a Tinder service) grew 17% to 9.6 million. With only 15 million total Payers among all of Match Group's services, Tinder is the majority of this business right now.

Since dating apps have no physical costs outside of servers and computing, Match Group's business has a very high profit margin, even as it has invested for growth. In the second quarter, Match Group's operating margin was 30%, even with revenue growing 26% and the company absorbing a $1.8 billion acquisition of Hyperconnect. On top of that, Match Group pays around 20% to 30% of its overall revenue out to the mobile app stores. If the app store fees were to ever go away or be regulated lower, Match Group's profit margin may end up being higher than it is today.

Tinder is growing quickly, but the rest of Match Group's portfolio actually grew revenue 28% year over year last quarter, faster than the flagship app. This is driven by emerging brands, which grew revenue 71% year over year to $103 million in Q2. This group is led by Hinge, the relationship-focused dating app aimed at an older audience than Tinder. Hinge grew revenue 150% year over year in Q2, and according to management is on track to double revenue in 2021. In fact, the app is now ahead of Bumble, Tinder's top competitor, in the grossing charts on Google Play. The growth of Hinge, plus other demographic-focused apps like BLK and Chispa, could help Match Group accelerate revenue growth in the coming years.

With a market cap of $43 billion, Match Group trades at a trailing price-to-sales (P/S) ratio of 17.6. This might seem expensive, but with high margins, the stock is at a stomachable trailing price-to-operating-income (P/OI) of 52.5. Margin expansion is probably on the way thanks to business maturity, the Hyperconnect acquisition, and growth from Tinder and emerging brands. I wouldn't be surprised to see this cause Match Group's P/OI to compress rapidly in the next few years. Combine this strong execution with the steady growth of online dating around the globe, and now looks like an opportune time to swipe right on Match Group stock.