Stocks that trade under $20 are often risky because they are typically smaller, less established companies or businesses that have either lost value or failed to deliver consistent growth. But if you look in the right places, you can find a stock in this price range that is ready to break out and become a long-term grower.

SoFi Technologies (SOFI -4.20%) is one of those stocks. Here's why this fintech stock trading at about $16 per share is a steal right now. 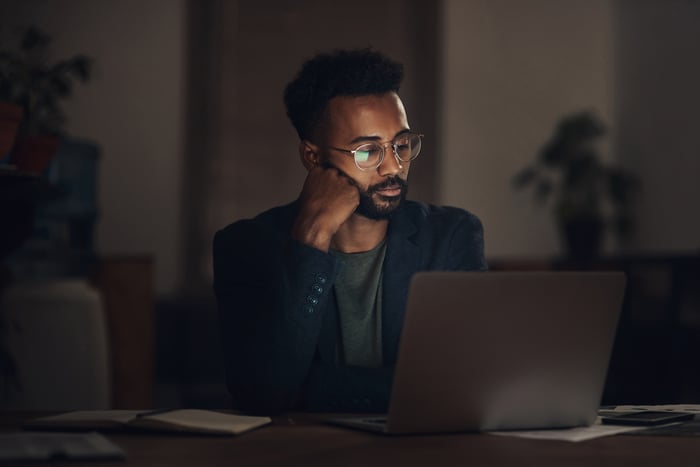 SoFi: A little bit Square with a dash of Robinhood

SoFi is an online personal finance company that has been around since 2011 but went public earlier this year through a special purpose acquisition company (SPAC). It first established itself as a student loan specialist, but it has since branched out into banking, personal loans, credit cards, mortgages, personal finance tools and services, and investing through its online platform. The banking and mobile payments, as well as the investing, are all done through a single app, not unlike Squareʻs Cash App or Robinhoodʻs investing app.

SoFi is also in the process of getting a bank charter, which would giving it something else in common with Square. Once it gets banking capabilities, SoFi could take deposits, expand its loan offerings, and engage in other related activities. It acquired a small bank in California, Golden Pacific Bancorp, earlier this year to ease the process. The charter could be granted by the end of the year.

In addition to lending and financial services, SoFi has a third business line helping other companies provide their own digital banking products. It provides front-end and back-end functions, including direct deposit, account setup, funding, automated clearing house transfer, interactive voice response, bill pay, transaction notifications, point-of-sale authorization, among other capabilities. It bought into this business through its acquisition of Galileo last year.

Currently, Sofi's lending business is its biggest revenue generator, but the financial services and technology arms are the fastest-growing. In the second quarter, lending revenue was up 73% year over year to $166.3 million, while technology revenue soared 138% to $45.3 million and financial services revenue exploded by 602% to $17 million. Overall, revenue was up 101% to $231.3 million year over year.

SoFi offers users a lot of functionality, and its business model should help make it all add up to more than the sum of its parts.

SoFi has some stiff competition from Square and PayPalʻs Venmo as a mobile banking/payment provider, but if and when the banking charter comes through, that should allow SoFi to gain market share, not only by scaling up, but also by cross-selling with its growing membership base. The technology platform is another excellent revenue stream that its competitors don't have -- and SoFi can tap into that vast network to cross-sell its banking and investing products.

Its number of members, 2.6 million, is more than double where it was a year ago. Total products -- which is use of any of SoFi's products by members -- was 3.7 million, up 123% year over year. The technology platform, thanks in large part to the acquisition of Galileo, saw the number of accounts it powers grow 119% to 79 million.

Cross-bought products are up 1.7 times from a year ago, CEO Anthony Noto said on the second-quarter earnings call. Noto added that the company continues to see operating efficiencies. "By leveraging cross-buying and better data utilization and targeting, we've reduced sales and marketing as a percentage of revenue, and customer acquisition costs meaningfully year over year," Noto said.

Gonna have a good day

SoFi has a lot going for it, not the least of which is the earworm and Nappy Roots classic "Good Day" as its advertising theme song.

At Monday's closing price, SoFi's stock was trading at $16.09 per share, down considerably from its highs around $25. I think it's a steal given its rapid growth, expansion initiatives, and status in some booming areas of the fintech space.

SoFi has a price-to-sales ratio of about 13, based on its $13 billion market cap and anticipated annual revenue of around $980 million. That's not unusually high for a young growth company. The company expects to see adjusted net revenue growth to $245 million to $255 million in the third quarter, up from the adjusted net revenue of $237 million this quarter, with $3 million in adjusted EBITDA. For the full year, it expects $27 million in adjusted EBITDA -- despite the student loan refinancing business operating at less than 50% of pre-COVID levels due to stimulus money from the pandemic. That should bounce back, and meanwhile, SoFi has developed its two other high-growth businesses.

The company had a net loss of $165 million in the second quarter, down from net income of $7.8 million the year before. The net loss may have caused the stock price to drop, but it is not too concerning in the long term -- it was due mainly due to one-time costs associated with going public and the acquisition of Galileo, in addition to continued investments in technology and marketing as SoFi's business ramps up. SoFi's adjusted EBITDA (earnings before interest, taxes, depreciation and amortization) was $11.2 million, the fourth consecutive quarter of positive adjusted EBITDA, which shows its growing profitability.

With a young, growing company like SoFi, there are going to be growing pains and short-term volatility. But long-term, SoFi has the potential to be a multibagger that youʻll look back on in 10 years and say you were glad you got it at $16 per share.

SoFi Is Becoming a Bit of a Regulatory Headache
366%