The glitz and allure of "Sin City" (Las Vegas) are back in full force, according to the latest Nevada gambling reports, and physical casino companies like MGM Resorts International (MGM 1.74%), Caesars Entertainment (CZR 2.24%), Las Vegas Sands (LVS 2.50%), and Wynn Resorts (WYNN 1.73%) could be the beneficiaries. Craving excitement, Americans are swarming back to baccarat tables, roulette, $25 slot machines, and blackjack games. Investors may want to take a closer look at the current situation and why traditional casino enterprises may stand to gain more than online gambling companies like DraftKings (DKNG 5.11%).

The resurrection of Las Vegas gambling is in full swing, according to several reports issued on Sept. 30 by the Nevada Gaming Control Board and analysis provided in an email by high-profile Board research analyst Michael Lawton. Importantly, while gambling activity was brutally crushed by 2020's pandemic lockdowns, current gains are surpassing pre-pandemic levels also. Lawton remarked the "$1.2 billion in win" during August was "up 22.3 percent over 2019 and represented the sixth consecutive month that the state has recorded $1 billion in monthly gaming win." 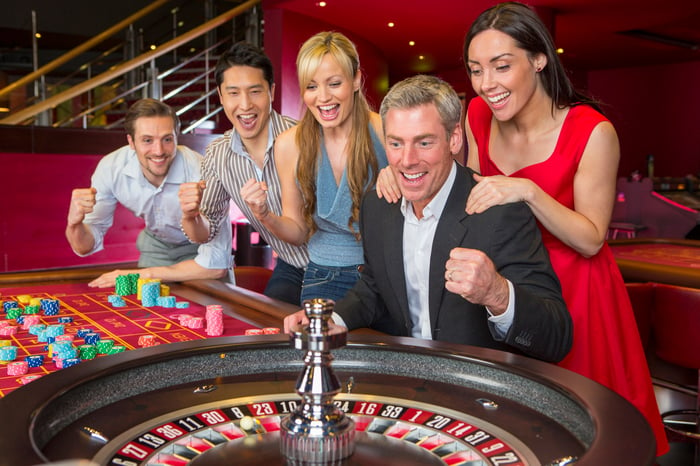 The analyst said some games declined month over month, but July, a "monster baccarat month," was exceptional. An official gaming revenue press release puts year-over-year gambling-win growth in August at 56.9% statewide and 92.2% on the Las Vegas Strip, where many major casinos are concentrated. With August's figures ahead of August 2019, the first eight months of the year are only narrowly trailing 2019's first eight months, with 2019's $2.4 billion revenue just a hair's breadth ahead of 2021's $2.3 billion. Lawton thinks the full-year haul could outperform 2019.

What it means for MGM and others

A surge of cash is coming into Nevada as the worst of the lockdowns end and pent-up demand is unleashed. Much of this bounty will find its way into the coffers of casino companies after the long "money drought" of COVID-19 lockdowns. The additional cash, in turn, will give Caesars, MGM Resorts, and others the capital needed to further develop other sides of their business.

One possible use of the windfall, besides deleveraging from debt accrued during the pandemic, is expanding the companies' presence in online sports betting and casino betting. DraftKings is trying to acquire Entain (ENT 1.38%), which would cut off MGM Resorts' BetMGM online gambling platform at the knees. However, MGM potentially has contractual power to veto the deal or even buy Entain's 50% stake in BetMGM, which is tentatively valued at $3 billion to $6.6 billion by Bank of America analysts. Even in the digital-betting world, the large casino operators have the wherewithal to challenge the specialized companies like DraftKings on their own turf.

Additionally, while Macao experienced a weak September, and intrusive new Chinese regulations could slow a rebound there, MGM Resorts isn't sitting idle. It is working to launch a major resort in the Japanese tourist destination of Osaka after receiving government approval. The $10 billion resort won't feature a casino but will instead offer dining, entertainment, spas, shopping, fitness, conferences and exhibitions, and tourism "as a world-class destination and gateway for the world to the wonders and rich history of Japan," according to MGM CEO Bill Hornbuckle.

Hornbuckle also remarked in an Oct. 4 interview with Yahoo Finance the plan has "considerable" profit potential. Rather than competing against 100 other licensees in the USA, he said, the company will have "the sole license to be able to do this activity in this case for 19 million people," an opportunity he described as "pretty compelling." This once again shows the big casino companies' multiple lines of business as a strength, bypassing difficulties by refocusing on an opportunity in another market.

Why casino stocks still look like a strong wager

Flexibility is the name of the game for MGM Resorts and other casino and resort companies, and this factor gives them an advantage over single-focus sportsbook companies like DraftKings. While DraftKings and Penn National Gaming (PENN -1.02%) may carve out a niche for themselves, they don't have the leverage or scope to create a digital revolution in the same way streaming services like Netflix did at the expense of now-failing physical cinema company AMC Entertainment in a different entertainment sector.

Having both physical and digital assets gives these enterprises adaptability to survive and thrive through various fads and disruptions. Whatever the temporary, short-term upsets, the outlook for Las Vegas Sands, MGM Resorts, Caesars Entertainment, and other leisure stocks appears to remain bullish long term. The strong return of gamblers and their money to Las Vegas reported by the Nevada Gaming Control Board is part of that positive case.

Bank of America is an advertising partner of The Ascent, a Motley Fool company. Rhian Hunt has no position in any of the stocks mentioned. The Motley Fool owns shares of and recommends Netflix. The Motley Fool has a disclosure policy.