During the third-quarter earnings call for Scotts Miracle-Gro (SMG -1.24%), CEO Jim Hagedorn not-so-subtly gave his opinion on the stock's price, saying, "I'm a big fan of buying our shares at these prices." While it is not uncommon to hear CEOs say this about their companies, Hagedorn may not simply be talking up his company's stock in this case.

With most of a $750 million share-repurchase authorization available, the company is eyeing its shares at a discounted price. But should investors consider buying, too? 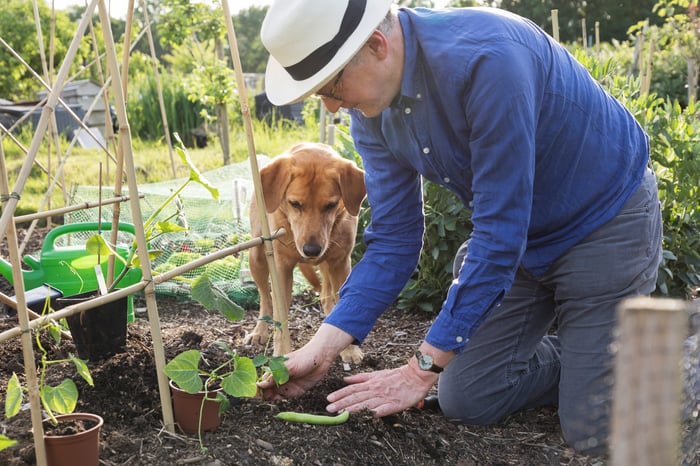 Scotts Miracle-Gro and its buy(back) thesis

Operating in the lawn and garden and hydroponic gardening markets, Scotts is a highly seasonal company, receiving 75% of its revenue in the second and third quarters. Aided by the pandemic and increased at-home spending, the company posted monstrous results for these quarters in 2020, leaving very tough comparables to meet this year. As the company lapped these comparables in 2021, the market was unimpressed, sending shares down by over 40% from their 52-week high.

However, despite the market's reaction, Scotts was able to grow revenue by 8% year over year for the third quarter and even grew earnings per share by 12% over the same time frame. Thanks to this seeming divergence between the company's growth and its stock performance, Hagedorn expanded upon his opinion of the company's share price, saying, "I'm comfortable allocating upwards of $250 million to share repurchase in the months ahead under our existing authorization, so look for us to do that."

At its current price, $250 million in buybacks equates to 3% of the company's shares outstanding and offers intriguing potential to investors as Scotts has seen its P/E ratio plummet to 15, compared to the S&P 500's average P/E of 31. In lieu of paying a special dividend, share buybacks can lower a company's total share count if done correctly and can be a great way to return cash to shareholders, especially if its share price begins to recover over time.

Operating as a pick-and-shovel play to the marijuana industry, Hawthorne, Scotts' indoor and hydroponic gardening segment, might represent the most compelling argument for an investment in the company. After growing sales 48% year over year during the third quarter, despite tough comparables, Hawthorne now represents 26% of the company's overall sales.

Scotts' rapidly growing segment has positioned itself beautifully to continue benefitting from the ongoing legalization of marijuana; it offers the lighting, nutrients, and growing media necessary to produce it effectively. As the company continues to bring new bolt-on acquisitions into the fold, it aims to improve the segment's overall profitability through its Project Catalyst initiative, a "company-wide restructuring effort to reduce operating costs". In addition, this initiative is expected to create "synergies from acquisitions within the Hawthorne segment".

With Hawthorne generating a profit margin of just 12% compared to the U.S. consumer (outdoor and lawn) segment's margin of 26%, this initiative could drive profitability for the indoor gardening and hydroponic segment. Ultimately, management is guiding for Hawthorne to finish the year with 40%-plus growth, which is in addition to its 60% growth rate from last year.

Scotts Miracle-Gro is the best of both worlds

Thanks to the low growth and high margins from Scotts' core U.S. consumer segment, and the high growth and low margins in its Hawthorne segment, the company's overall valuation appears quite muddied. But the two distinct business lines fit together nicely, as the cash generation from its core segment helps fuel the growth for Hawthorne. In a way, this is reminiscent of a steadily growing eBay (EBAY -2.79%) before the spinoff of its high-growth PayPal (PYPL -1.39%) unit and perhaps foreshadows the potential success of an investment in Scotts Miracle-Gro at today's discounted price.

While a spinoff of Scotts' Hawthorne segment is probably not imminent, the company's current P/E of 14 paired with the fledgling segment's potential has me in agreement with CEO Hagedorn and his bullish view on the stock.