Are there enough reasons to buy the stock apart from an attractive dividend yield?

Shares of Kinder Morgan (KMI -1.80%) trade right now at a dividend yield of 6.1%. The stock surely offers an attractive spread over U.S. 10-year Treasuries, which are yielding around 1.6%. But before getting lured by the high yield, it is important to understand the company's prospects. Let's look at its recent performance, and its expected growth in the coming years.

In the last five years, Kinder Morgan has generated steady EBITDA as well as stable cash from operations. The company's bottom line was also largely in the black over this period. This steady performance can be attributed to its fee-based, long-term contracts.

Around 68% of the company's earnings are backed by take-or-pay contracts. Such contracts entitle Kinder Morgan to get payments from shipper customers, regardless of actual throughput on its assets. Kinder Morgan's interstate gas pipelines are largely reserved under such contracts. 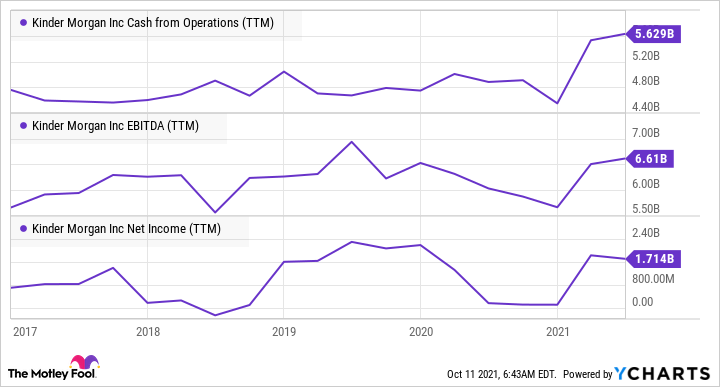 Roughly 25% of Kinder Morgan's earnings are fee-based. Such contracts generate revenue based on volumes transported, regardless of the price of the commodities. The company's gathering and processing assets and its refined products pipelines largely generate fee-based earnings.

In the first half of 2021, Kinder Morgan derived 68% of its earnings from its natural gas pipelines segment. As a gas-focused operator, the company is in a good position to benefit from the expected continued growth in natural gas demand. According to the International Energy Agency, global natural gas demand may rise 14% above 2019 levels by 2030. The growth is expected to be driven by higher demand from Asia. 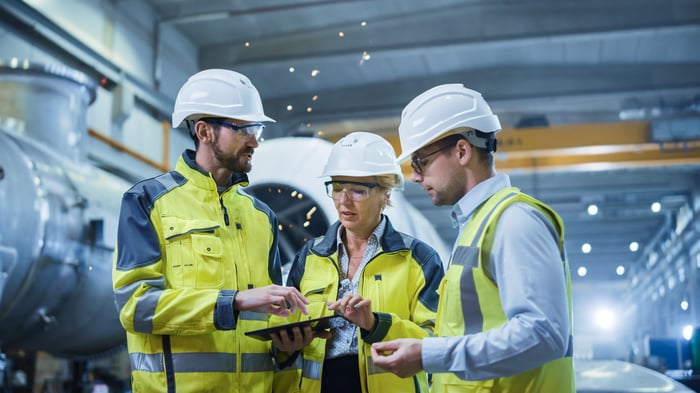 In addition to gas transportation, Kinder Morgan operates export terminals and is well positioned to benefit from the expected growth in U.S. gas production and exports.

Kinder Morgan has a project backlog of $1.3 billion. For perspective, the company's expenditure on growth projects has been on a downward trend in the last few years. 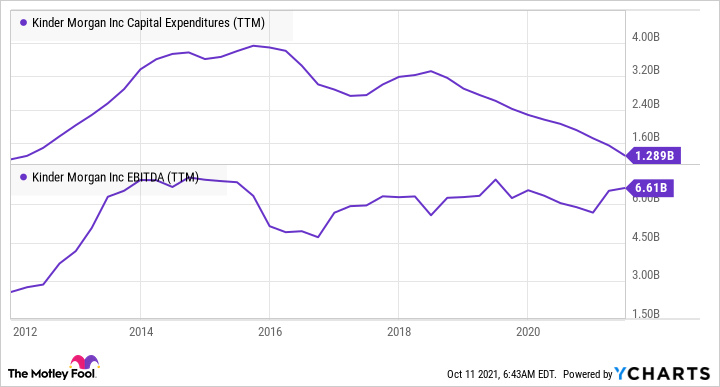 As the above chart shows, despite reduced capital spending, Kinder Morgan has been able to keep its EBITDA relatively stable. The company might not grow as fast as it did during the shale boom, but it still looks like it is in a good spot for steady growth for the next several years.

Roughly 64% of the company's $1.3 billion backlog belongs to its natural gas segment. In addition to growth projects, Kinder Morgan is also looking at acquisitions to drive growth. In 2021, the company has acquired assets from Stagecoach Gas Services and Kinetrex Energy.

An attractive stock for dividend investors

Kinder Morgan has significantly improved its balance sheet since 2014, when it was forced to slash its dividend due to high debt and a challenging commodities market. The company generates steady cash flows that are supported by fee-based contracts.

Despite the strong growth in renewables, the demand for natural gas is expected to remain robust over the coming decades. With a huge asset footprint, Kinder Morgan is well prepared to benefit from this demand through both organic growth and acquisitions. All in all, Kinder Morgan looks like an attractive stock, especially for dividend investors.