Trying to figure out how to invest in China amid the turmoil? Here's a simple guide.

If you're interested in global investing, you know that China Evergrande Group, China's second-largest property developer, is facing imminent default. Many are asking whether Evergrande's bankruptcy poses systemic risk to global markets, comparable to Lehman Brothers' demise before the Great Recession.

But savvy investors should also be asking: Is now the smart time to buy China?

China's ETFs may not yet be screaming buys. But, as the Evergrande crisis unfolds, they could well become so. How will you know when the time is right for you? Read on to learn more about this -- and understand the key differences between two of the biggest China ETFs. 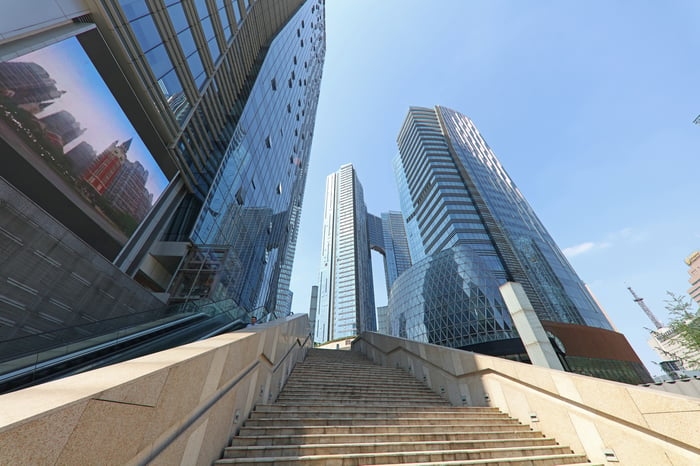 An exchange-traded fund, or ETF, is a single security that allows investors to buy many stocks and bonds -- or almost any asset class -- at once. For example, the SPDR S&P 500 ETF allows buyers to own every stock in the S&P 500 -- with a single purchase and at minimal cost.

ETFs achieve these low management costs in part through set formulas that determine what they will hold at all times. For example, SPY (I'll stick to tickers in this article to keep it simple) simply replicates the S&P 500.

As Warren Buffett points out, when you consider how rare it is for anyone to beat the market picking individual stocks, most long-term investors would do best -- and beat 99% of Wall Street -- if they simply bought and held a portfolio of well-chosen ETFs.

But there are two critical metrics you should inspect before buying any ETF: the expense ratio and the ratio of price to net asset value (NAV).

While not as cheap as SPY, ASHR and FXI charge expense ratios of only 0.65% and 0.74%. These fees seem acceptable given the complexities of offering Chinese business ownership to U.S. investors.

The second metric, price to NAV ratio, is comparable to the ratio of price to book value when buying a stock. NAV is the value of an ETF's assets after subtracting all liabilities and dividing by the number of shares outstanding. It's the amount of cash you would be paid per share if the ETF were liquidated tomorrow.

As with stocks, if you can buy ETF shares trading well below NAV, you are essentially getting them for "free." This is especially true if you are confident in the long-term value of what the ETF owns. Indeed, an ETF's NAV is usually a more reliable indicator of its current value than a public company's book value. This is because an ETF's assets are almost always entirely liquid and can be sold quickly for known prices.

At Tuesday's prices, both ASHR and FXI were trading right around NAV. Neither offers a significant discount, which I would define as 10% to 20% or more.

But both are worth watching as Evergrande's saga unfolds.

But why even follow more than one China ETF? Do they all allow you to own a piece of China in the same way? If not, what are the differences? As with individual stocks, it is worth carefully reading the prospectus of any ETF you are considering buying.

One key difference is that FXI owns a more concentrated basket (52) of the largest companies in China, while ASHR includes more companies (292), covering a broader spectrum of small- and mid-cap Chinese stocks.

Another difference is that ASHR owns "A shares" of an index called the CSI 300. These are shares traded directly in mainland China and represent direct ownership of Chinese companies, something once not available to most foreign investors.

Allowing Americans to own A-shares in China directly represents a major policy change for the Chinese government. It is potentially a great opportunity for all foreign investors. Historically, U.S. investors wanting Chinese exposure could only buy "H-shares," Hong Kong-traded shares of the type that FXI owns, or American depositary receipts (ADRs).

The Hong Kong market is the one that has so far declined most during the Evergrande saga, and thus FXI is right now the relatively better bargain of the two ETFs. That said, A shares have historically traded at as much as a 60% premium to H shares. While both share classes are typically economically equivalent, in China, it is not easy to legally convert one into the other.

Even once they trade at a discount, buying into Chinese ETFs in the middle of this crisis will not be for the faint of heart.

Well before Evergrande, China had posted weaker-than-expected economic data for 2021, while investor concerns about new state policies targeting the country's growing inequality were increasing. This is in addition to ever-present concerns about Chinese companies' honesty in reporting and an economy many think to be built on a real estate bubble.

Anyone buying into these ETFs should not be shocked if their investment value nominally falls by 50% or more one week.

But, as Buffett would remind us, price is not value. True long-term investors -- those with the courage, foresight, and nerves to buy and hold China through this crisis -- may be richly rewarded in the future.

There has rarely been a more exciting time to look at international stocks, especially those in China. Evergrande's calamity should be a source of concern to all investors -- and the volatility in Chinese stocks over the next year could become extreme. But it may soon also create historic opportunities for those willing to buy and hold long-term.

Carefully research and make a short list of your favorite China ETFs. Pay attention to NAV discounts and expense ratios. And, when the right price finally comes, pounce.

Why Shares of China Evergrande Group Are Rising Today