The fast-casual pioneer's incredible earnings momentum continued last quarter, but how long will it last?

Nevertheless, Chipotle stock fell 3% on Friday, ending the day more than 8% below the all-time high it reached last month. Let's take a look at whether this pullback has created a good entry point for long-term investors. 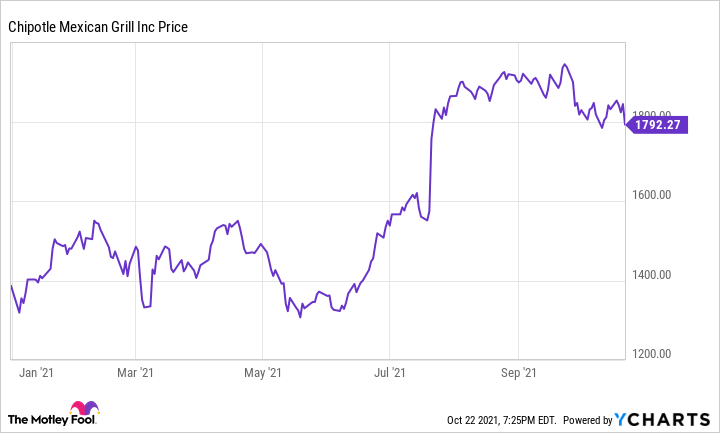 Chipotle generated record revenue of $1.95 billion last quarter: up 21.9% year over year. Comparable sales jumped 15.1%, driving most of that growth. Excluding changes in delivery pricing, average sales per restaurant reached $2.48 million for the past 12 months, compared to $2.19 million for the prior 12-month period.

The strong increase in restaurant productivity -- along with price increases implemented over the past year -- helped Chipotle expand its Q3 restaurant-level operating margin to 23.5% from 19.5% a year ago, despite inflationary pressures. Total operating margin grew at an even faster pace, reaching 12.3%, as Chipotle was able to spread its overhead costs over more revenue compared to the third quarter of 2020.

As noted above, these favorable factors enabled Chipotle to post adjusted EPS of $7.02, cruising past the analyst consensus of $6.32.

Looking ahead to the fourth quarter, Chipotle's guidance calls for comparable sales to continue growing at a double-digit pace. Management expects restaurant-level operating margin to decline sequentially to between 20% and 21%, due to normal seasonality, higher food costs associated with a limited-time brisket menu option, and the shift of some marketing spending from Q3 to Q4. But that would still represent an increase over Chipotle's 19.5% restaurant-level operating margin in the fourth quarter of 2020.

Based on this guidance, Chipotle should post another strong year-over-year EPS increase in the fourth quarter. That said, analysts had been expecting something on par with last quarter's 87% EPS jump, which would require Chipotle to dramatically exceed its margin forecast.

Chipotle's forecasts do tend to be conservative, but earnings growth is still likely to moderate somewhat this quarter. As a result, the average analyst EPS estimate has retreated to $5.31 from $6.49 at the end of September.

Chipotle is on track to generate full-year adjusted EPS of around $25 this year: roughly four times what it earned in 2017. While EPS growth is bound to moderate from the remarkable pace of the past few years, the fast-casual chain has plenty of upside for revenue and earnings over the next decade.

Management continues to see room to eventually operate at least 6,000 restaurants in North America. For comparison, Chipotle ended the third quarter with 2,892 restaurants. Management also aims to boost average unit volumes (AUVs) above $3 million, up from around $2.5 million over the past 12 months. Higher sales per restaurant should enable the company to continue expanding its operating margin.

If Chipotle grows to 6,000 restaurants over the next decade and AUVs reach $3.5 million, it would generate $21 billion of revenue. At a 15% operating margin -- well above current levels but below the highs of 2014-2015 -- that would translate to annual EPS of $80 to $100. Thus, even after its recent pullback, Chipotle stock trades for about 20 times its potential earnings a decade from now. That's an awfully expensive valuation, especially given that Chipotle's growth rate will almost certainly have moderated by then.

That doesn't mean Chipotle stock is doomed. If the company can boost AUVs to $4 million or more, grow beyond 6,000 restaurants (potentially via overseas expansion), and increase its operating margin beyond 15%, it could generate enough long-term earnings growth to justify its lofty valuation. However, the company has little room for error, and that makes Chipotle stock too risky relative to its upside potential to be a good buy today.